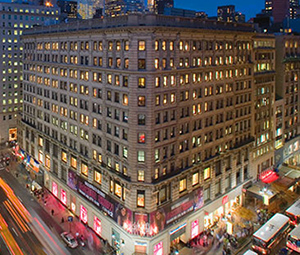 Avison Young announced that Principal and Executive Managing Director of the New York City Retail team, Jedd Nero, has been named exclusive leasing agent for nearly 60,000 s/f of retail space at Two Herald Square on 34th Street between Fifth and Sixth avenues, one of the busiest retail corners in the country.

The property offers high ceilings and over 75 feet of frontage on the ground floor, previously occupied by H&M.

Over 100 million pedestrians pass through the intersection of 34th Street and Broadway every year. Merchants in Herald Square generate over $1.3 billion in annual sales. Over 20 million shoppers visit Macy’s flagship department store directly across from Two Herald Square. Over 550,000 daily commuters use nearby Penn Station, America’s busiest passenger transportation center.

“This represents a rare opportunity for retailers to establish a flagship location on one of the most heavily trafficked retail squares in New York,” said Nero.

“For a few lucky retailers, this offers an opportunity for a real miracle on 34th Street. The space, available in a variety of configurations, offers a chance to capture a remarkable retail audience in one of the nation’s prime shopping locations.”