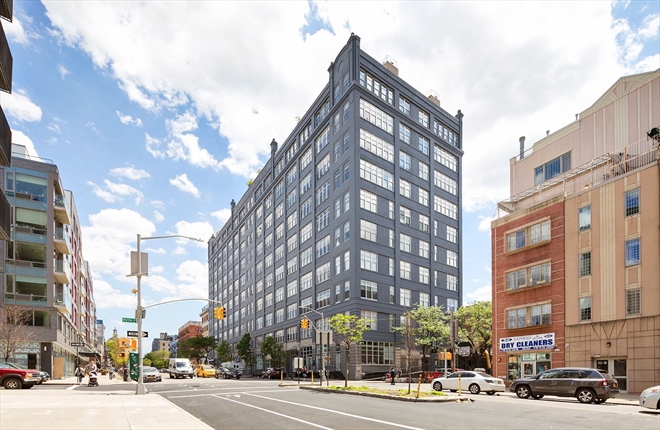 Architect Karl Fischer died peacefully at his home in Vermont on March 12, 2019 surrounded by family.

The Hungarian born architect designed many of the houses, commercial buildings and condominiums that grace the skyline in Montreal and New York.

Born on February 22, 1949 in Gemzse, Hungary, his family fled to Canada during the Hungarian Revolution in 1956.

They settled in Montreal and Karl attended McGill and graduated in 1972 with two Architecture degrees and many broken bones from all the rugby he played.

Karl opened his own architecture firm in 1984 in Montreal and a branch in New York City in 1999.

Among his many New York projects, he converted the former Gretsch Musical Instruments in Williamsburg and turned it into a 130-unit luxury condo called the Gretsch Building (pictured top) .

A stretch of Bayard Street in Williamsburg became known as Karl Fischer Row after he built three nultifamily buildings there.
Other projects included Park Plaza in Williamsburg, The Powerhouse in Long Island City, and Schaffer Landing a 350-unit development on the East River in Brooklyn.
Outside of work, Karl loved adventure, travel, music and spending time in Vermont with his family and his Highland cows. Whether he was driving the tractor, designing a luxury treehouse for his granddaughters, or bushwhacking through the deep snow on his cross-country skis, Karl was never happier than when he had a long list of tasks to accomplish.

If he wasn’t fixing something or chopping something down, he could be found cycling through the Green Mountains, snowboarding at Jay Peak, flying his plane, or climbing Mount Kilimanjaro.

He is survived by his wife of 47 years, Pamela; his children Alison (Ian) and Daniel (Andrea); and his beloved grandchildren Amelia, Clara and Maelyn. He is also survived by his brother, George; his sister, Kathy; his mother, Elizabeth; as well as his nieces, nephews and their children. He is predeceased by his father, Lazlo Fischer.

A private memorial will be held later this spring in Montreal. In lieu of flowers, charitable donations may be made in Karl’s name to Humane Canada (www.humanecanada.ca)