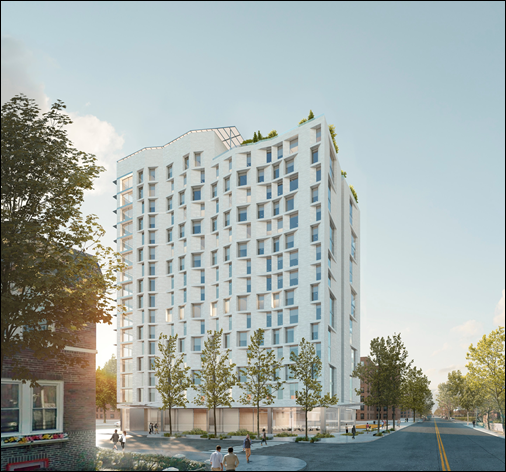 The New York City Department of Housing Preservation and Development (HPD) and the New York City Housing Authority (NYCHA) have announced builders for 100 percent senior affordable housing in Brooklyn and The Bronx.

Xenolith Partners, The Kretchmer Companies, ELH Mgmt., and the Jewish Association Serving the Aging (JASA) will build in the Soundview section of the Bronx.

HPD Commissioner Maria Torres-Springer said, “The selected proposals will create hundreds of new homes for seniors on underused NYCHA land, providing an anchor of affordability to both individuals and communities. ”

“The variety of services and programming provided by JASA and the Brooklyn Arts Council will further enhance healthy living and cultural opportunities at Linden Court, through seniors’ fitness areas, spaces for art and social gatherings, and healthy food options through rooftop community gardening, to name but a few.”

Casa Celina will be a 16-story building comprised of 200 senior units at Sotomayor Houses in the Bronx, developed by Xenolith Partners, The Kretchmer Companies, ELH Mgmt. and JASA.

Also, approximately 3,350 s/f of community space will be accessible to NYCHA residents and the surrounding community.

Amenities will include an exercise/fitness room, laundry room, lounge spaces on every floor, a second-floor community space, and a landscaped rooftop terrace.

The JASA East Bronx Case Management Program will provide social support service and senior health and wellness programming on-site thanks to funding by the NYC Department for the Aging (DFTA). This team includes MWBE certified developers.

This will include approximately 3,000 s/ft of community facility and senior social services run by JASA, with additional programming provided by Brooklyn Arts Council.

Designed to serve building residents and older adults from NYCHA and the surrounding area, Linden Court will include a senior center with an art gallery and café, warming kitchen, bathrooms, and two large multi-program rooms which can be divided to accommodate small classes and events.

Casa Celina and Linden Court will both serve residents age 62 years and older, where 25 percent of the units will be set aside for NYCHA residents and 30 percent of the apartments will be reserved for homeless seniors.
NYCHA will maintain ownership of the land, ensuring long-term affordability.

NYCHA’s Sotomayor Houses was built in 1955 and consists of 28, seven-story buildings containing 1,497 apartments. Casa Celina will be constructed at the corner of Watson and Thieriot Avenues.

The Authority’s Bushwick II (Group E) buildings were built in 1986 and consist of five, three-story buildings containing 276 apartments. Linden Court will be constructed on Linden Street, between Knickerbocker and Wilson Avenues.