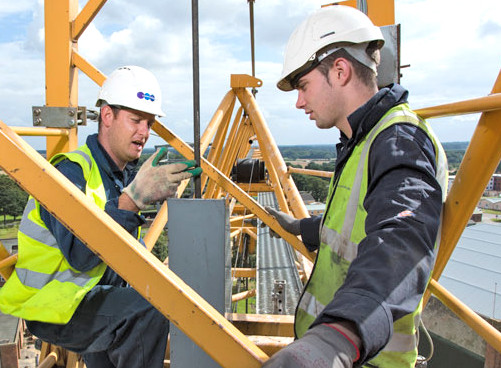 Apprentice program offers a path to the middle class

It was not long ago that our nation’s economic outlook was bleak. Countless Americans faced the prospect of unemployment, and the most pressing question for many families was, “How are we going to make ends meet?”

Today, our economy is growing, both in New York City and across the country. Markets have boomed, inflation has stabilized and unemployment has declined.

Yet despite these encouraging signs, many families feel they are no better off than they were during the recession.

That is because, by and large, the economic recovery has done little to provide a pathway to the middle class for the hard-working men and women across the country who continue to struggle.

Fortunately, though, that pathway does exist.

November 2 marked the start of National Apprenticeship Week: an opportunity to celebrate the innovative initiatives that collectively represent that pathway to the middle class for thousands of city residents every year.

Over the past 10 years, New York City’s Building and Construction Trades have worked hard to create apprenticeship programs that serve as a model for the construction and other industries not only in the five boroughs but across the United States.

In doing so, we have demonstrated that apprenticeship programs are an effective means of growing diversity, enhancing the quality of our workforce, lifting our neighbors out of poverty and strengthening our communities.

Every day, we read about industries that are struggling with diversity problems, from tech to energy to marketing. This is a problem that long plagued the construction industry as well.

The union construction trades recognized this many years ago, and became the first to stand up and proactively develop and implement solutions like the Edward J. Malloy Initiative for Construction Skills.

Through this program alone, we have welcomed thousands of skilled African-American and Latino workers into our ranks, and we are proud to say that today, 65% of local apprentices are minorities.

Many of these graduates have risen through the ranks to become shop stewards, foremen, political directors, organizers and other important members of the union construction industry.

Our apprenticeship programs do more than expand opportunities to men and women who may not otherwise have a pathway to the middle class.

They also offer world-class training, which is especially critical in New York City – a place that in many ways is defined by its buildings.

The training our apprenticeship programs provide ensures union projects are built by the most skilled workforce anywhere, and under the safest conditions possible.

Finally, the communities that make up this city are better off because of these apprenticeship programs. A strong community takes care of its most vulnerable members.

That is why New York City’s Building and Construction Trades have forged a partnership with the New York City Housing Authority to provide men and women across the five boroughs with that pathway to the middle class through pre-apprenticeship and apprenticeship programs; and a historic agreement with the City as part of its Build It Back program that ensures Sandy-impacted residents will represent no less than 20% of those employed in rebuilding efforts.

And it is why, through New York City Helmets to Hardhats, they have placed nearly 500 veterans in careers in the construction industry across the five boroughs since 2013.

An apprenticeship is so much more than a position. It is a foundation. This week, we recognize the apprenticeship programs that have provided that foundation for thousands of hard-working New Yorkers to achieve the American dream by reaching the middle class. That truly is something to celebrate.