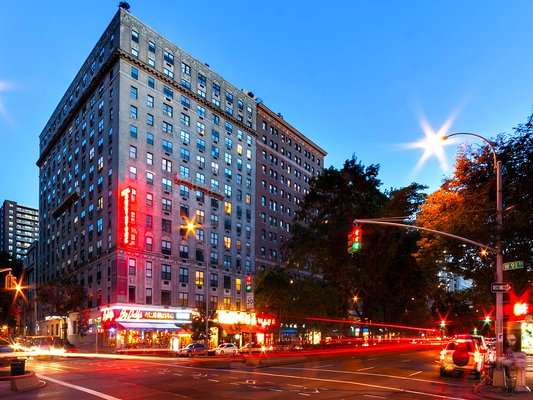 What’s old is new again at The Greystone

The Greystone Hotel, which started its existence as a fancy hotel almost a century ago, is now facilitating luxury apartment living within the confines of less than 400 square feet.

The property, located on 212 West 91st Street in the Upper West Side, was first built in 1923. It was converted into apartments in 2009. Now, it’s undergoing a makeover, with reworked apartments, a renovated lobby and a communal rooftop area.

“Every few years, you really need to freshen up. Rental buildings have a much more transient occupancy than condos, so it’s important that things don’t start to look run-down,ˮ said Cliff Finn, the executive vice president for new development at Douglas Elliman charged with handling the re-modeled rentals.

“From a business standpoint, it affects your rent stability. If something looks run-down, they’re gonna have problems paying market for it.”

Kelly O’Connell, founder of Brooklyn interior design firm Native Studio, said that her main goal for the renovation was creating a space that she would want to hang out in.

“I think what we wanted to do was kind of strip away some of it and make everything more clean line. You know, kind of find a balance between modern and also it being in an older neighborhood and older building,” she said.

The renovation, which started shortly after Brack Capital Real Estate sold the 362-unit rental building in 2013, resulted in the “Modern Collection,” a collection of 36 renovated apartments scattered across the property.

Acuity Capital Partners, which owns the building, acquired the property in a deal worth $139.1 million, funding the upgrades with a multi-million capital raising program.

The result are living spaces that, as Finn puts it, are worthy of the “integrity and continuity” of the Upper West Side.

“There are few more modern construction properties in the area. Not many in this neighborhood, but there are some. They don’t have what this building has; it’s the combination of the richness of historical detailing and architecture. You still get the essence of a pre-war experience, but you get the experience of a modernized building on the inside,” he said.

The breakdown for the Modern Collection units are 26 studios (which the Greystone classifies as ‘modern micro flats’) and 10 one-bedroom apartments.

The apartments have finishes such as solid hardwood oak flooring, Ceasarstone countertops and bathrooms with Italian marble.

The studios range from 284 s/f to 354 s/f. The one bedroom units have an area of 650 s/f. Rent in the building starts at $2,168, with the price increasing depending on the addition of appliances and a Murphy bed that folds back into a wall.

The facelift has translated to quick deals. Since launching sales in February, apartments have gone at a rate of 11 apartments per month.

This meant that the 33 Modern Collection units listed for the property were all taken within three months.

Finn attributes the attractiveness of the building to the convenience it offers, which he claims is more than enough to compensate for the lack of space.

“For this price, you are getting a lot for your money and you’re not necessarily giving up lifestyle within your apartment because everything you need is still here,” he said.

“So yes, you can spend another $400-$500 a month and be in a bigger studio in a newer building. You may not even get these amenities…. I would say that there’s nothing that you need that’s not in this apartment… It’s about efficiency.”

Is Bronx the next Brooklyn?