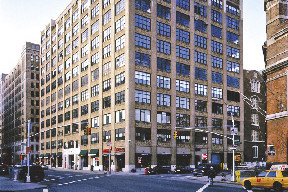 Squarespace, which is used by hundreds of thousands of individuals and business owners to create personalized websites, is taking 100,000 s/f at the 12-story building, which will include the top three floors along with a private lobby and roof deck.

“We are pleased to welcome Squarespace to Hudson Square’s thriving community of creative and media companies,” said Jason Pizer, President of Trinity Real Estate. “Their new headquarters at 225 Varick Street will be an anchor for the building and the neighborhood, as Hudson Square continues to provide a home for companies that are vital to the city’s future.”

Brian Dooley, Rocco Laginestra, and Paul Myers of CBRE represented the company in the long-term lease. They declined to comment further on the deal.

Squarespace, launched in 2004, is currently occupying space in three buildings and four floors in Soho, at 408, 451, and 459 Broadway.

The firm plans to occupy its new space by the fourth quarter of 2015, according to a press release issued by the brokerages that negotiated the lease.

The headquarters will be the new home to the 260 staffers Squarespace currently employs, which include engineers, marketing, designers, recruiting and customer care.

The company has added 98 employees to its New York City staff since January of this year.

The last tenant that occupied the space was Merrill Corp., a printing house, which used it for language translation services.

Other tenants of the 380,000 s/f building include fashion designer Thankoon Panichgul, which leased 12,000 s/f at the building in 2012, the National Audubon Society, and Workman Publishing.