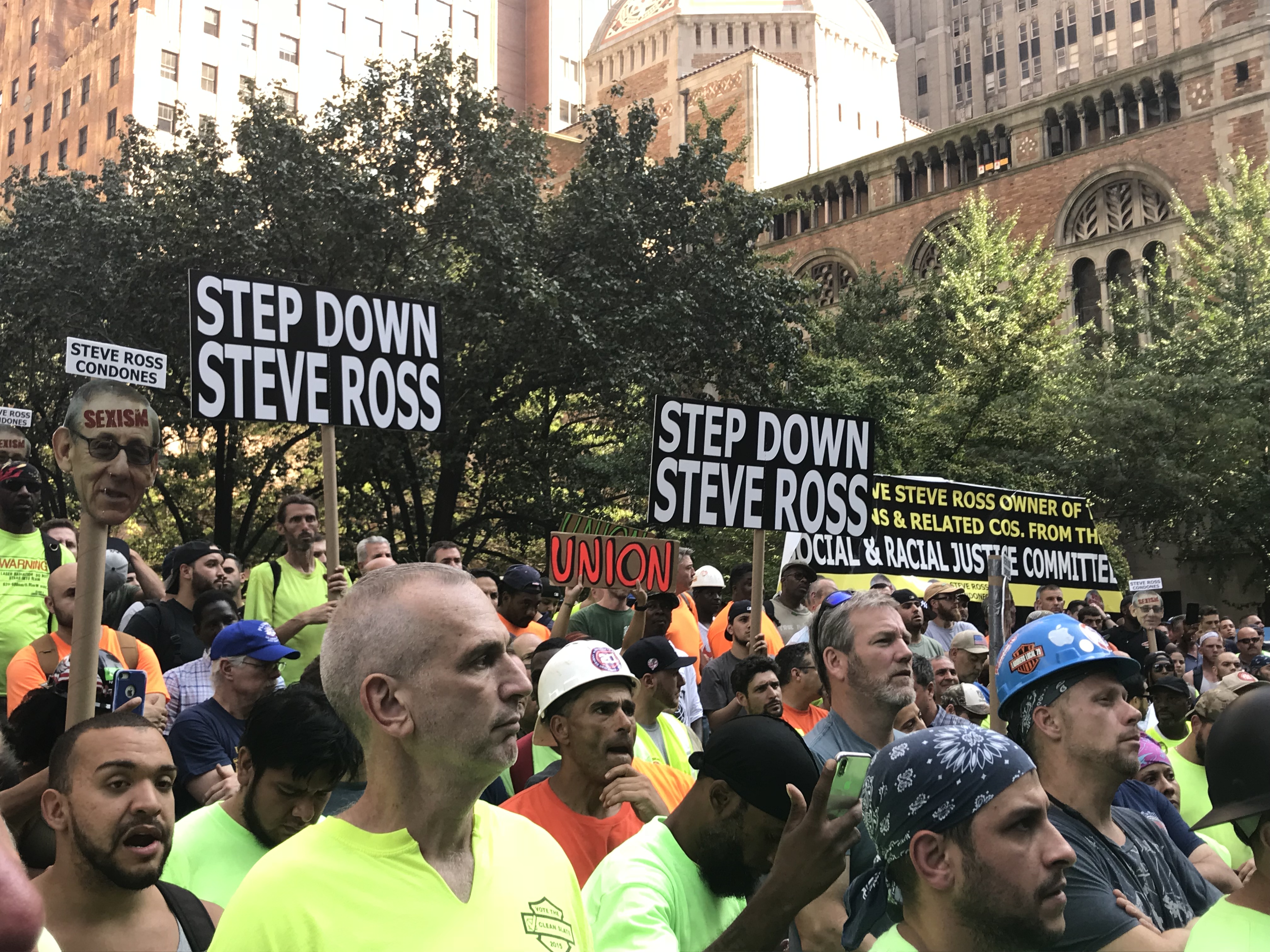 New York’s building trades unions are not taking a knee in their ongoing dispute with the Related Companies.

Thousands of construction workers rallied against Stephen Ross, the company’s founder and chairman, Wednesday afternoon on Park Avenue. The latest in the ongoing saga between Related and the city’s builders unions has the two sides arguing about who is a bigot.

Waiving signs and images of his likeness outside the NFL’s Manhattan headquarters, union members urged Ross, the majority owner of the Miami Dolphins, to step down from the league’s Social and Racial Justice Committee, accusing him of failing to address its own charges of racism and sexism.

“From allegations of sexual exploitation to the surveillance and outing of a formerly incarcerated African-American  worker on its job site; Related has failed to address social and racial justice on its own jobsites,” the company wrote in a press release. “It is offensive that the NFL has given Related’s Chairman and Founder a seat on a committee that supposedly works to address social and racial justice.”

Related, meanwhile, called the demonstration a disingenuous smear campaign and pointed to the litany of racial bias lawsuits leveled against the unions. A company spokesperson even referenced a quote by a Local 79 member who spoke out against undocumented immigrants in the workforce.

“It is ironic that Local 79 and the [Building and Construction Trades Council] is attacking Stephen Ross who created and funded a non-profit dedicated to improving race relations,” Joanna Rose, Related’s executive vice president of corporate affairs, told Real Estate Weekly in an email.

Related and the BCTC have been at odds with one another since March when the developer filed a lawsuit against the trade group, claiming it violated a project labor agreement by running up roughly $100 million in excessive wages, benefits and insurance costs. Since then, the trades have organized multiple protests against the company.

The two sides also have differing views about the remaining work at Hudson Yards, Related’s marquee development in the city as well as the largest private employer of union workers. The BCTC wants a project-wide PLA for the remaining work on the Midtown West site while Related would rather contract with each work group individually—earlier this month it struck a deal with the carpenters union for the remainder of the mega project.

“This is another desperate attempt by the BCTC to hold on to protectionist, outdated and inefficient rules and practices that have resulted in dwindling market share,” Rose. “Their insistence on padded payrolls, no show jobs, continued violation of contracts and federal labor law, have caused irreparable harm to individual union members.”

Race has been a hot-button issue around the NFL since 2016, when then-San Francisco 49ers quarterback Colin Kaepernick began taking a knee during the singing of the National Anthem to draw attention to police brutality and the killing of unarmed black men throughout the country.

For his part, Ross initially supported his players’ choices to protest but later said he’d prefer they stand during the pregame ceremony. This season, the NFL will institute a fine for players who don’t stand for the anthem, though players who feel so inclined will be allowed to remain in the locker room.