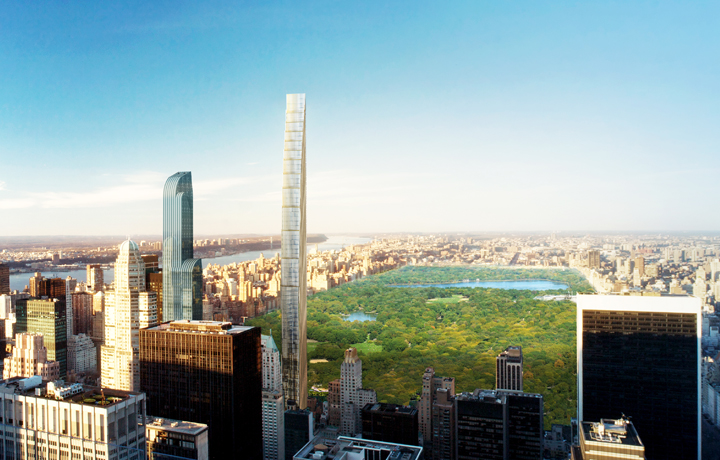 “Ziel is a pain in the ass, I want you to print that,” said Kevin Maloney, sitting in his windowless office in the Flatiron District.

Then he laughed. For those who don’t know: the developer has a good relationship with his former business partner, Ziel Feldman, who now heads the rival firm, HFZ Development.

Maloney’s relationship with his current partner on a number of projects, Michael Stern of JDS Development, is more troubled.

The two developers reportedly fell out earlier this year — Maloney cryptically speaks of “different philosophies” — and will no longer work together on any projects in the future, following completion of the luxury tower 111 West 57th Street.

The high-profile divorce leaves Maloney’s Property Markets Group in a state of uncertainty. Few real estate investors have been more successful over the past few years. But the firm’s success has been built on two factors it can no longer count on: its partnership with JDS and the strength of the luxury condo market.

The former will soon be a thing of the past, and the latter might well be, too — at least according to a growing number of researchers and developers.

This means Maloney may have to reinvent his business once more if he wants to stay relevant. For better or worse, Property Markets Group’s future may lie in the outer boroughs.

Maloney has been a prominent real estate developer in New York for decades, but his latest string of successes really began in 2009, when a young and still largely unknown Michael Stern approached him.

Stern had gone under contract for a building on West 19th Street, used by Verizon as storage space, with plans of turning it into condos and needed money to close the deal. Maloney, who had sold three hotels just before the market crashed in 2007, happened to be one of the very few real estate investors with money to spend.

The two men partnered up and bought the building for $25 million. It turned out to be a “slam dunk”, in the words of broker Bob Knakal. In a market starved of new development, the Walker Tower (as the former Verizon building became known) was one of the few new luxury condos at a time when foreign and domestic demand for them picked up dramatically. “We underwrote it for 60 percent of what it sold out for,” Maloney recalled.

Stern and Maloney then repeated their success at another former Verizon building at 435 West 50th Street, which they bought for $45 million in January 2013 and christened Stella Tower. The condo conversion is now sold out, according to Maloney. He said the last available unit sold two weeks ago for $41 million. The building’s most expensive condo went for a staggering $51 million.

Flush with money from the Walker Tower and with luxury sales booming across the city, it made perfect sense for Stern and Maloney to take their strategy to the next level.

In March 2013, the developers bought the Steinway Building at 109 West 57th Street for $46 million. They already owned the adjacent parcel at 105 West 57th Street, and the combined lot offered enough width and air rights to build one of the city’s tallest residential towers.

This February, the developers broke ground on a 1,350-foot hotel and condo tower designed by SHoP architects. They are currently looking for a $500 million construction loan, with Maloney saying they have “a couple of offers” from banks.

But whether the project will be even remotely as successful as the Walker and Stella Towers is far from certain. In the months since 111 West 57th Street broke ground, the luxury condo market has slowed significantly.

Extell’s tower One57 has only sold one unit in the third quarter — a pace at which it would take the building six years to sell out. Sales at Harry Macklowe’s 432 Park Avenue have reportedly also slowed.

With several more condo towers set to hit the market in the coming years, some observers already predict a crisis.
“If real estate was a publicly traded company and I could short its stock, I would very happily short 57th Street,” Stonehenge Partners’ CEO Ofer Yardeni said recently. “The market there has stopped. It hasn’t just declined five percent or 10 percent. It’s just stopped.”

Maloney himself is surprisingly pessimistic about the luxury condo market — at least for someone who is investing millions in it.

“Citywide, when you get into apartments above $25 million, the air gets very thin very quickly,” he said. “At any one time there are maybe a half dozen people in the city looking for a $50 million plus apartment, and there’s now probably 60-70 of those apartments on the market.”

He added that if he could redesign his luxury condo project 10 Sullivan, he would probably break its $44 million penthouse up into two or three units.

“There’s going to be some downward pressure at the very high end,” he said.

Maloney reckons it is a “mistake” that developers on 57th Street are primarily putting apartments above $25 million on the market.

Ironically, he is about to do just that. 111 West 57th Street’s full-floor apartments will span roughly 4,000 s/f, and Maloney hopes to sell them for more than $7,000 per s/f. In other words: he is about to unload roughly 60 apartments with an asking price of more than $25 million onto a market that he already considers to be oversaturated.

Maloney is not one to miss the contradiction between the likely asking prices at 111 West 57th Street and his own pessimistic prognosis.

“It’s contrary to what I just said,” he admitted. But he sees reason for optimism in what he calls the low basis cost of the project. He explained that, if need be, he could still make money if he sold each unit for $3,000 per s/f.

Such a buffer between cost and target asking price is a luxury not all developers enjoy. More importantly, Maloney has been hedging his bets across the city and asset classes, buying up land in Brooklyn and Queens. While he is taking a wait-and-see approach to Manhattan’s luxury condo market and hasn’t ruled out developing more such projects in the future, his investments in the outer boroughs allow him to plan for a future beyond Michael Stern and $25 million condos.

In Long Island City, Property Markets Group is developing the 44-story rental tower Queens Plaza South with 400 rental units, which Maloney expects to top out in six months. In November, the firm also bought Long Island City’s clock tower building and an adjacent site in two separate deals for a combined $77 million. Maloney declined to say what his plans for the site are.

Property Markets Group has invested even more heavily in Brooklyn’s Gowanus neighborhood, where it has bought up around about a million square feet (under current zoning) of commercial space over the past four years. “We’re probably trying to do half a dozen buildings there” once the neighborhood gets rezoned, Maloney explained. He added that the planned residential buildings will likely have affordable units and an “arts component.”

Dan Marks, a broker with TerraCRG who specializes in Gowanus, said Property Markets Group got many of its properties for a bargain because it entered the market early.

“These guys were investing in the Gowanus area even before a lot of other companies were,” he said, adding that growing demand for commercial space means the investments will be profitable even if the neighborhood doesn’t get rezoned. A rezoning of Gowanus for residential development is currently under review.

Rental development in Gowanus and Long Island City may not be as flashy as building a Midtown luxury skyscraper, but in a way it seems more in line with Property Markets Group’s culture. The firm occupies a modest space on West 17th Street, whose tiny lobby and windowless offices surrounded by makeshift walls are a world away from the glassy Midtown headquarters of some of its competitors. This is not exactly where you would expect a firm that once counted Gary Barnett and Ziel Feldman as its partners to be based.

The three developers founded Property Markets Group in the early 1990s, when Barnett was still a diamonds trader based in Belgium. “Gary was really the money guy”, Maloney recalled. Barnett was the first to leave the firm, becoming the founder of Extell, and Feldman left in 2005. A framed newspaper clipping on Maloney’s wall shows a Crain’s article from 1994 on their purchase of the Belnord, an apartment building on the Upper West Side.

Although Maloney hasn’t spoken to Barnett in about a year, he said the two are on good terms. He has more regular contact with Ziel Feldman.

“We spent 80 hours a week together for 15 years, so we know each other very, very well,” he said. “When he buys a site, he still writes me and says ‘I just got this great deal’, and I say ‘Yeah, sure you did’”. микрозаймы