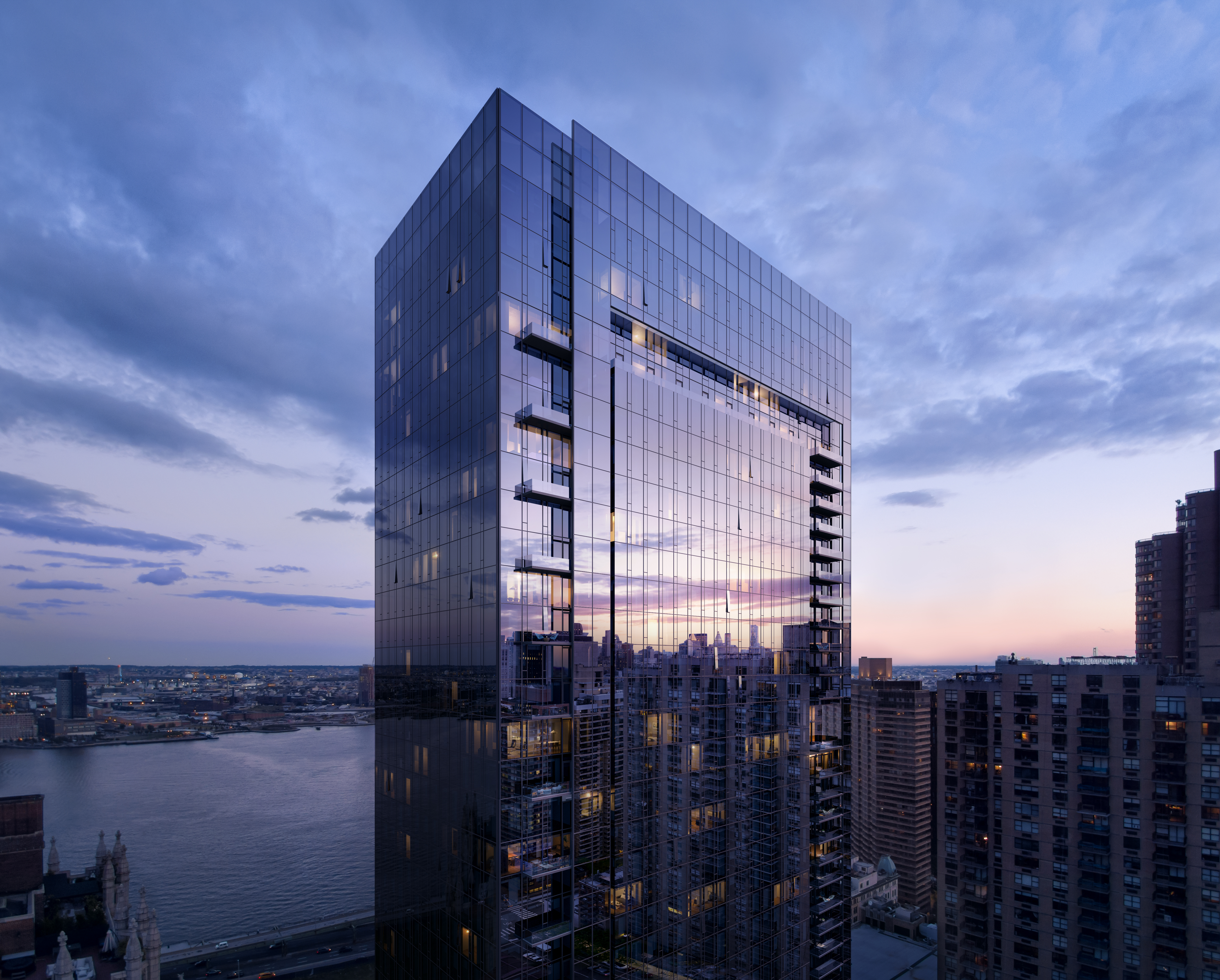 Sheldon Solow’s latest black-clad building is racing toward completion on Manhattan’s east side, aiming to deliver resident-ready units and amenities by this fall.

While the aesthetic and location of 685 First Avenue fit the long-time developer’s modus operandi, this is not a prototypical Solow Building Company project. It’s the first time the multifamily rental and office specialist has dabbled in condominiums.

With high-tech hardware, high-class design and high ceilings, the 148 luxury condos atop the 43-story tower look to raise the bar for luxury living in a part of town that has ceded cachet in recent years to renaissance districts along the Hudson River and in Lower Manhattan. 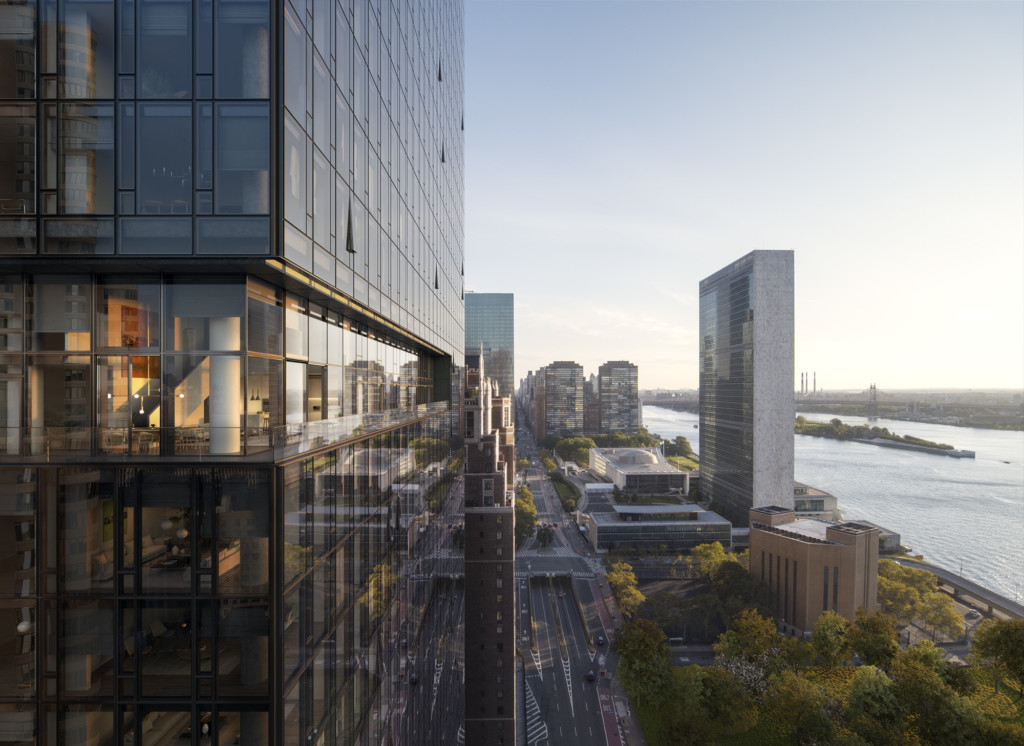 Spanning the block between 39th and 40th Streets, 685 First Avenue is a perfect block of German-made black glass, interrupted only by a transparent gap on floors 28 and 29. Designed by architects at Richard Meier & Partners, it stands in stark contrast to the vintage brick and stone structures along Murray Hill’s East River waterfront and the less-imposing emerald sheen of the nearby United Nation’s headquarters.

It is matched, not in character but in modernism, by only the crooked bodies of the American Copper Buildings, a pair of rental towers opened by JDS Development Group on First Avenue and 36th Street last year.

“Midtown East is filled with a variety of architectural styles and designs, which is one of its most alluring qualities,” Dukho Yeon, an associate partner at Richard Meier’s firm, said. “It also enables 685 First Avenue to connect with the surrounding cityscape with a striking and modern design aesthetic.”

Although it is located on the west side of First Avenue, the vacant lot across the street — which is also owned by Solow Building — leaves 685 First exposed to the East River and easy to spot from Long Island City. Yeon said the goal was to create an iconic addition to the eastern skyline, one that is easily identified at night when the 28th and 29th-floor duplexes are illuminated.

“The details of the façade are expressed as a ‘skin’ and selecting the right glass was critical to the design,” he said. “The black glass unifies the façade, provides privacy for residents and controls the reflection of the context in a way that a clear glass building cannot with its transparency.”

In addition to adding stylistic flair, the terraced duplexes also mark the borderline between the condos on the upper floor and the 408 rental units below.

Nearly as impressive as the building’s black exterior is the 30-foot-tall main lobby, dressed in smooth, white travertine. Once complete, the space will be adorned with a three-panel painting from Spanish artist Joan Miró, straight from Sheldon Solow’s personal collection.

Every condo, ranging from the $1.5 million single bedroom units to the $8 million four-bed, is outfitted with a smart-home system from Crestron. This allows residents to adjust everything, including lighting, music and the fully-automated sun-shade system that retract into the ceiling as well as security cameras, if one so desires, all from the wall-mounted control screen or remotely via a smartphone.

Residents can program “scenes” with specific lighting and music and they can set up phone notifications linked directly to their HVAC systems. Each unit is also wired to connect with a Google Home or Amazon Echo device.

Ceiling heights in the condos average 9 ft. 6 ins. except in the 42nd floor double-height penthouses, which stretch up to 20 feet while still offering floor-to-ceiling glass.

Despite its impenetrable exterior, the glass is surprisingly translucent from the inside, providing impressive sightlines for most floors.

A low-rise Con-Ed facility to the west and the open lot to the east offer protected views of Midtown and Long Island City, respectively, at least for the time being. Solow has kicked around the idea of building multiple residential buildings, a park and, potentially, a commercial development on the east side of First Avenue, although it’s unclear how those projects might impact views of the water.

For now, even the second-floor amenities, which include a gym, sauna, steam room and a 70-foot lap pool, have unfettered views of the East River.

“It was really important to us that the amenities be situated in a desirable part of the building and that they offer great views and natural light to encourage use,” Yeon said. “For the pool specifically, because the space is facing the East River, we wanted to highlight this river view as well as capture as much natural light as possible.”

Although the seven penthouses each provide compelling vistas, be it a straight line glimpse at the Chrysler Building or a dead-center shot of Long Island City’s rising waterfront developments, the most impressive view can be found in the southeast corner unit, which gives an unobstructed look down First Avenue, clear to the Financial District and 1 World Trade Center. One can even watch the East River Ferry pull into dock.

Rental units on floors three through 27 are on track to be move-in ready by the end of September, at which point the amenity space also should be complete. Condo sales launched in May and the developers are targeting a move-in date of early next year.

HAVE YOU HEARD? Yachting champ’s estate and Tommy Hilfiger’s home up for sale

Sales slow in The Hamptons