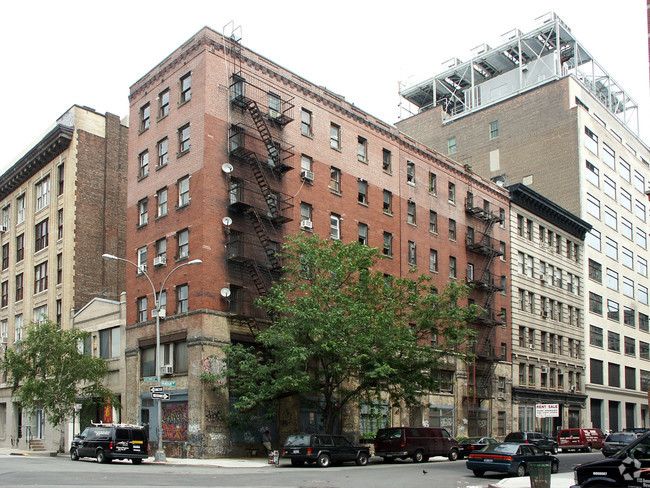 50 landlords can’t collect rent because the law says so

Tenants of at least 50 buildings in the trendiest neighborhoods of Manhattan, Brooklyn and Queens have lived rent-free for years and their landlords can’t do anything about it.

Shielded by the Loft Law, a statute meant to protect at-risk renters from predatory landlords, well-heeled tenants have strong-armed owners into sales, buyouts and bankruptcies while their rent-paying counterparts are stuck with poor living conditions and bad management.

“There are bad actors on both sides,” said Tamsen Young, a rent-paying tenant at a converted loft in Bushwick. “Most people just want to pay a reasonable rent and have a landlord that cares enough to do what they’re supposed to do.”

Drafted in the early 1980s and updated in 2010 and 2013, the state’s interim multiple dwelling, or IMD, law gives tenants of illegally-converted lofts an extraordinary say over if, when and how their buildings are brought up to code.

Property owners complain of renters abusing the system. Tenants are loath to help landlords price them out of spaces that aren’t cheap to begin with. A bill meant to appease both sides is stalled in Albany with what one official called “an outside chance” of getting a special session vote this fall.

Citywide, 339 illegally-converted buildings are sanctioned under the Loft Law — 264 of them lack a certificated for occupancy, meaning tenants there can withhold rent.

Unlike a typical dispute, those unpaid rents don’t accumulate in escrow, they stay with tenants permanently.

Many of the new units rent for between $2,300 and $2,700 on the open market, according to Jason Frosch, a Loft Law specialist at the law firm Borah Goldstein.

Frosch and his partner, David Brody, represent about 100 IMD building owners, half of whom can’t collect rent from their tenants.

“The requirements of the Loft Law are costly and time-consuming,” he said. “The law doesn’t acknowledge that reality and it requires owners to front those costs while allowing the tenants to deprive them of a revenue stream that is necessary to pay those costs by withholding rent.

“And it creates a perverse incentive for certain tenants to delay the process and obtain a windfall for doing so,” he added.

Landlords have nine months to complete the first phase of compliance, which includes compiling reports about the present state of the building and how it will look once improvements are made, the latter of which must be agreed upon by the tenants. Residents can delay this process by barring ownership from entering their units or postponing meetings.

In the best case scenario, Frosch said, a building owner has a year to obtain a certificate of occupancy before tenants can go on perpetual rent strike. Given the nature of these properties, most of them former factories and warehouses, that’s nearly impossible.

Even in Tamsen Young’s building, where the tenants and owner worked together to legitimize the building, the process has stretched out for eight years.

Earlier this year, state Senator Martin Malavé Dilan, a Democrat from northern Brooklyn, introduced a bill that would allow owners more time to make improvements before tenants could withhold rent.

Despite lobbying efforts bankrolled by IMD owners, the proposal didn’t gain traction until late in the legislative session, after it was amended to appeal to the more pro-tenant Assembly by allowing additional buildings to qualify for IMD protection.

The session ended before the bill could get a vote in both houses, but Graham Parker, a spokesman for Dilan, said the bill could be resurrected if the Legislature calls a special session to vote on a high-profile issue, such as the use of traffic cameras in the state. Even then, the Loft Law amendment would need to find enough votes to pass.

“I would say there’s an outside chance it gets put to a vote in a special session,” Parker said.
Tamsen Young moved into her loft several years ago, joining her artist husband, the first residential tenant in the building. He rented space in the still-active factory more than two decades ago to live and work on his sculptures.

Although the process has not been flawless, Young said her landlord has been communicative and accommodating, even keeping two vacant apartments in the building off the market so tenants could rotate through them while their units were renovated.

“In our case, there was some back and forth about what changes would be made, but that process is great because everyone is happy,” she said. “We got the unit we wanted and they were able to come in and do the work they needed to do in order to be in compliance.”

Based on conversations with tenants at neighboring loft buildings, Young said the process can be more contentious. In some cases, she believes, landlords claim to make improvements while simply sitting on their hands.

Even improvements that are made without fully informing tenants, Young added, can cause distrust and lead to resistance.

“When people get paranoid, it’s really because they don’t have all the information,” she said. “They’re concerned that if they’re told something will take three weeks that it’ll actually take eight, or if they agree to leave the building they might not be allowed back in. Trust is essential.”

Frosch believes uncooperative tenants are motivated by things other than fear.

Tenants, many of whom spend as much on legal fees as the would on rent, often are angling for buyouts or hoping to force desperate owners into selling them their buildings at a discount, he said.

“A lot of the tenants will hire the same attorney and that attorney, when a mass buyout is on the table, will put out an exceptionally high price,” he said. “So there really is no market for it.”