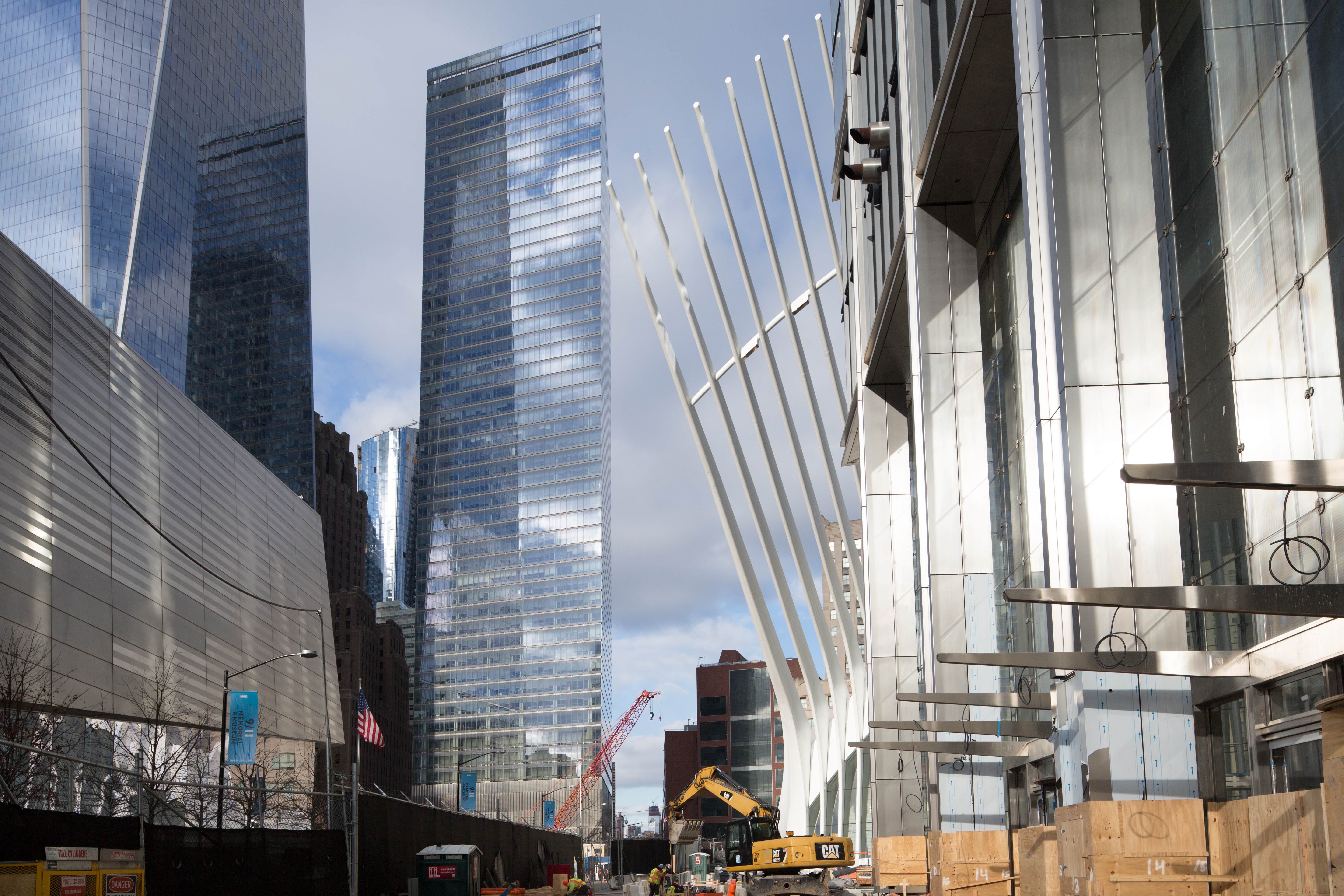 There are six men standing in the lobby of 3 World Trade Center, each between 12 and 15 feet off the ground.

Poised atop a trio of Kelly green scissors lifts, four of them hold a sheet of rubber spanning the width of the cavernous entryway while the other two blast it with hot air so it will stick to the ceiling and diffuse the glow of the LED lights above. The 50,000-s/f atrium is awash with work site pounding and whirring; the floor is half gleaming white tile, half trampled plywood.

Come this summer, though, it will be a high-tech respite from the sounds of construction, commuting and commerce at a newly-minted retail district.

“The idea is that you walk into the lobby and it’s a filter for New York City,” Silverstein Properties Vice President Carlos Valverde said. “You walk in here and all of a sudden you’re transported into a futuristic, digital world where you’re going to be able to … really have a sense of calmness.”

The 1,079-foot tower is three months from its grand opening. The largest tenant, media investment company GroupM, has begun building out its 700,000 s/f of office space and is targeting a July move-in date.

As the fourth of five glass skyscrapers called for by Daniel Libeskind’s 2002 redevelopment plan, completion of 3 World Trade will mark a significant milestone in the resurrection of the site, which could be wrapped up as early as 2021.

Silverstein Properties, the developer tasked with rebuilding the area in the wake of the September 11, 2001 terrorist attacks, broke ground on 3 World Trade in 2009 but had to battle through setbacks to begin construction in earnest in 2014.
The 2.5 million s/f office tower was built on speculation and, despite commitments from several media companies, more than half of the building remains unleased. To fill out its remaining floors, it must go head to head with another rising office district nearing completion three miles to the north in Hudson Yards.

However, Silverstein brass is not concerned with local competition.

Positioned between Building 4, which was finished in 2013, and the Oculus transportation hub, which opened two years ago, 3 World Trade holds a central location on the site and serves as an axis for the memorial plaza, Valverde said.

With zig-zagging brackets of stainless steel on the east and west sides of the building and three prominent terraces, Building 3 also is also the most architecturally distinct of the World Trade Center structures built to date.

The architect, Pritzker Prize winner Richard Rogers of Rogers, Stirk, Harbour & Partners, also employed subtler touches to make the building stand out, such as placing mullions between the windows on the north and south sides of the building while packing the east- and west-facing plates closer together.

Tishman Construction also took a non-traditional approach to building the tower, opting for a core-first build instead of beginning with the steel frame, as is customary in the city.

Core-first construction has an established track record around the world and has been used on a few New York projects, but most avoid it out of deference to the city’s ironworkers, Valverde explained. Silverstein sold the union on the construction method’s potential to boost efficiency.

“They said yes,” Valverde said, “and now I think the union is more open to doing similar sort of core-first buildings in New York City.”

Loading docks are below grade, meaning on all four sides of the building will offer some type of public access, either through the lobby or retail storefronts. Courtland Way, a pedestrian-only path between buildings 3 and 4, will be a shopping corridor, Valverde said, complete with cafes, restaurants, an H&M and other stores.

Building 3 will be accessible from the sprawling underground transit hub — with its 11 subway lines and PATH train platforms — via escalators that connect directly to the lobby. Once inside, visitors are greeted by a three-tiered ceiling and 60-foot glass walls.

When tenants swipe their access cards at the security checkpoint, the building automatically calls an elevator to take them to their designated floors. Sardinian granite and red glass decorate the elevator banks and each set of doors is framed by LED door jambs that can be color coordinated with the lobby lights, Valverde said.

Targeting a LEED Gold certification, the tower comes with a building automation and temperature control system that centralizes information about temperatures inside and out. Building engineers can then adjust settings accordingly. Building 3, which shares a smart electrical grid with the other World Trade Center buildings, also uses regenerative energy for hot water and electricity.

With Building 3 nearing completion, Silverstein is able to shift more of its focus toward finding an anchor tenant for its final office, 2 World Trade Center, and constructing the area’s performing arts center, which just secured funding from Albany last month.

Both projects could be finished as early as 2021, bringing the historic site’s two-decade-long renovation to a close.
“When we set about rebuilding the World Trade Center, our goal was to create a place full of life and creativity that would reflect who we are as New Yorkers,” Moss said. “At the end of the day, our vision was to create a better version of New York. That vision is now a reality.”