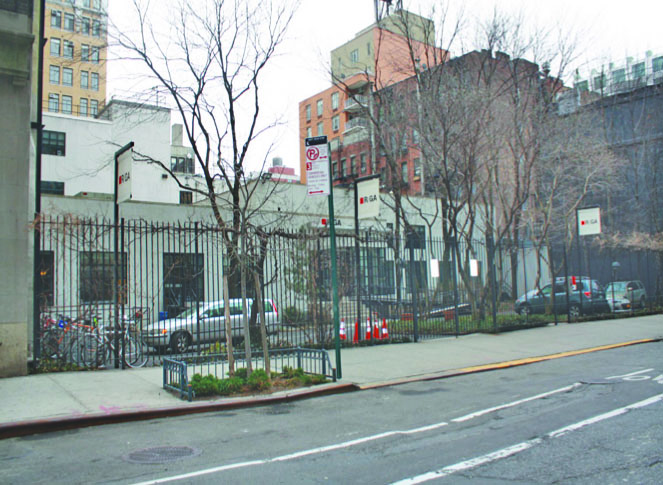 Hotel developer Sam Chang has closed on a $112 million Hudson Yards development site where he plans to build one, possibly even two more hotels.
The block-through site at 345-353 West 38th Street was sold for RGB Building Partnership by Massey Knakal chairman Bob Knakal and colleagues Jonathan Hageman and David Kalish.
The maximum FAR of 12.0 in the zoning district allows for a development of up to 296,250 s/f square feet, and the sale price equates to approximately $400 per buildable square foot.

According to Knakal, another hotel — or two — in the neighborhood is just what the city needs.
“Over 56 million visitors came to New York this year, 20 million more people than came back in 2007,” said the prolific broker. “Back then, we had about 11,000 hotel rooms, but that dropped to around 85,000 during the recession. There’s been a lot of hotel building, but we are just back to the number of rooms we had back in 2007 when we had fewer tourists.”
Knakal said he has over 300 offers for the Garment District site where prices are making hospitality the viable development option for many investors.
The West 38th Street site is near some of the city’s largest privately and publicly funded development projects, including Hudson Yards, Manhattan West, the #7 subway extension, Hudson Yards Boulevard and Park, and the West Chelsea High Line.
“This transaction illustrates the continued demand that exists for development properties in and around the Hudson Yards District. Every week, buyers who are new to the area are expressing interest in purchasing something there,” added Knakal.

The Daten Group plans to turn a former gas station into a luxury rental building.
The company led by David Ennis and Craig Rosenman announced it paid $7.4 million for the site on the corner of 840 Fulton Street and Vanderbilt Avenue in Clinton Hill, Brooklyn.
The price includes air rights of the neighboring property at 848 Fulton Street.

Rosenman said the company will build a seven-story luxury, 40,000 s/f building on the lot with 38 rental units, 20 percent of which will be affordable.
KBA Architects will design the building. There will be about 5,000 s/f of retail space at the project, which is estimated to cost $20 million.
Construction is slated to start in early 2015, with a completion date of March 2017. The seller was Fulvan Realty LLC, a long term owner of multiple gas stations in the area.
Vibe Living, vibeliving.com, the Daten Group’s rental management company, will manage and market the property and Douglas Elliman will conduct the initial lease-up campaign.
“There is a tremendous demand for residential in this area,” said Rosenman, director of acquisitions for the Daten Group.
“With its close proximity to public transportation into Manhattan, this site will be highly desirable for both residential and retail tenants.”
The Daten Group is currently finishing a condo project at 72 Poplar Street, Brooklyn, where units have sold for between $2 and $4.65 million.

The team was also responsible for procuring the buyer, a fund invested in by an offshore entity and first time US buyer. The fund is managed by JM Capital LLC and was advised by Nadlan Advisors LLC.
While the company declined to identify the buyers, a spokeswoman said the group was made up of Asian investors.
45 Waterview is a 106,680 s/f office building located in an institutional quality campus near Interstates 80 and 287. The Property is 100 percent net leased on a long-term basis by Royal DSM, a global life science and material science company, for its North American Headquarters.
Dunne commented: “45 Waterview demonstrates the substantial depth of capital for long-term, net leased assets in New Jersey.”

Harbor Group International has sold 1420 Broadway, a three-story, 7,200 s/f retail property for $18 million. HGI purchased the property in October of 2012 for $10.25 million.
“1420 Broadway is a stable asset in a strong market that benefits from a long term lease and buildable air rights,” said T. Richard Litton, president of HGI,
“The property’s performance exceeded our expectations and once again confirmed our predictions for rapid growth in the Times Square submarket.”
Constructed in 1911, 1420 Broadway is 100 percent net leased to Christine Inc., which operates a luncheonette/convenience store on the first floor and subleases to a masseuse and salon on the second and third floor.
It is located in the retail bridge between the Times Square and 34th Street retail corridors.
HGI has been on a tear buying urban retail properties, most recently acquiring similar properties in New York, Washington, D.C., and London.

Terms of the transaction were not disclosed.
The property is a 125,000 s/f building located on 22 acres off Route 8 and two miles from the Merritt Parkway.
Paul Cooper, CEO of GTJ, said the property — the REITs third purchase in Connecticut this year — complements its existing portfolio well.
“We are well positioned to execute on our stated strategy of expanding our portfolio footprint in the Northeast and Mid-Atlantic regions,ˮ said Cooper.
“We intend to invest in important improvements to this property and are optimistic that we will have Sikorsky Aircraft as a tenant for the long-term.”

Slate Property Group has closed on four multifamily properties at 342 East 85th Street and 1908 & 1910 3rd Avenue in Manhattan, as well as 457 15th Street in Brooklyn.
The firm plans to reposition these properties, creating rental apartments.
The total project costs for the four properties amass to nearly $30 million, and Slate is currently in contract to acquire another $60 million worth of multifamily assets in the next three months. Martin Nussbaum, principal and co-founder of Slate Property Group, stated, “We are excited to continue our long-term plan to acquire apartment buildings in strong locations and add to our growing portfolio of multifamily and mixed-use properties in New York City.”
David Schwartz, principal and co-founder of Slate, added, “The Upper East Side, East Harlem and Park Slope neighborhoods are strong residential markets with demand for high-end apartments. We saw a value add opportunity in these four properties and look forward to working on our business plan for these assets.”
Slate purchased 342 East 85th Street, a six-story property on Manhattan’s Upper East Side, for $6.075 million.It paid $10 million for 1908-1910 3rd Avenue. 457 15th Street, a four-story, 20-unit property in Park Slope cost $6.2 million.

Madison Realty Capital (MRC) announced the purchase of 421 West 21st Street, a six-story multifamily elevator building in West Chelsea.
The 30,421 s/f property, which contains 36 units, was originally constructed in 1950 and has been family-owned by the seller since 1995.
MRC intends to pursue a “comprehensive value oriented capital expenditure program ˮin order to reposition and modernize the property, which includes renovating vacant units into high-end luxury units, enhancing the lobby, hallways and elevator, and improving the overall operating efficiency of the property.
Josh Zegen, co-founder of MRC, said, “At a basis which is well below replacement cost, the transaction offers intrinsic long-term value with the opportunity to generate immediate results through proactive management.”

Murray Hill aparment
building gets new owner
A New Jersey company has paid $13.4 million for a Madison Avenue apartment building.
Fred and Sheldon Stahl, of Houlihan Parnes Realtors, announced the sale of the 24-unit elevator building at 28-30 East 38th Street.
The prime Murray Hill location, between Park Avenue and Madison Avenue, helped keep the property 100 percent occupied and allowed rent increases as apartments were renovated, according to the brokers. The property was meticulously maintained by the ownership who purchased the building in 2008.
The sale price was $13,440,000. The buyer was SDK Properties.

● APF PROPERTIES
Investor demonstrates some shock and awe with profit-maker

Just over a year after acquiring the Class A office property at 2200 West Loop South in Houston’s Galleria submarket, APF Properties, has sold the property to its anchor tenant.
The New York-based real estate investment firm sold the 94 per cent occupied 200,000 s/f property to Tenaris, an energy sector supplier, for a reported $47 million
Berndt Perl, principal of APF Properties, said the company targeted the Houston market for investment based on the area’s status as one of the leading population and employment growth cities in the U.S.
Acquired for $37 million in August of 2013, the asset had an 8.3 percent cap rate and was positioned for future growth with over 75 percent of its below-market leases set to expire by the end of 2017.

APF’s initial plan was to seek an institutional joint venture partner and unlock the additional value of the asset over the next four or five years.
The asset was encumbered by an existing long-term mortgage through 2022. The mortgage coupled with a four year time span until the lease expiration of the largest tenant gave institutional investors – more than 60 of them – pause.
“This transaction is a win-win for APF Properties and Tenaris,” said Perl.
“Not only did we realize a return of over 60 percent on our equity investment, Tenaris has acquired a top quality asset at far below replacement cost with ample room to grow.
“We were, quite frankly, shocked that we were unable to find an institutional joint venture partner for this asset given the 8.3 percent cap rate, 98 per cent occupancy at purchase, half of the leases at 45 percent below 2013 market rates, and land value that was about 90-95% of the asking price of the building.
“This sale validates that our investment thesis for the property was right on target.”
Built by Hines in 1974 and designed by Skidmore, Owings and Merrill, the building sits on 4.2 acres located in whar is the 17th largest office market in the U.S.

Eastern Consolidated has been retained as the exclusive agent for 40-42 Exchange Place, a 20-story office building with ground floor retail in Lower Manhattan, primed for a major office building reposition, or conversion to hotel or residential condominium.
The 20-story, 250,000 s/f property is on the market for sale for just the first time in 25 years.
“The continued migration of office tenants Downtown perfectly positions this asset for a major office building reposition,” said Lipa Lieberman, who represents the seller.

CPEX Real Estate announced the sale of a development site at 88 Schermerhorn Street for $11 million, or $330 per buildable square foot.
The property has permitting for up to approximately 33,330 buildable square feet for residential use.

CPEX’s Sean R. Kelly, Esq., represented the seller, 88 Schermerhorn, LLC, who purchased the property in October of 2013 for $3,750,000. CPEX also procured the buyers, Heights Realty Advisors and Rockwood Capital.
The buyers plan to build a luxury condominium building, according to Kelly.