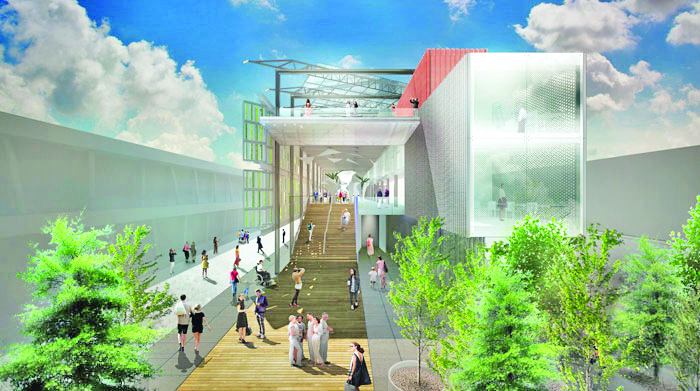 Some 10,000 s/f of reclaimed lumber for the Hurricane Sandy-ravaged boardwalks of Coney Island and Rockaway Beach are being used to build the US pavilion for the 2015 World’s Fair.

New York-based Biber Architects has designed the pavilion with a walkway that will stretch from one end of the 42,000 s/f structure to the other.

The architects tapped the local Sawkill Lumber Company to reclaim scrapped Coney Island and Rockaway boardwalks which were made of rare tropical species, such as Ipe and Cumaru, that were sourced decades ago from the rain forests of Guyana and Brazil for their resistance to insects and rot.

A re-milling process restored the colors of the wood before it was shipped to Itlay to become a key part of the American Food 2.0: United to Feed the Planet exhibit Biber is designing for the Fair.

With the 2015 World’s Fair theme as food, Biber has designed an exhibit to highlight America’s role in the global food system that includes a harvestable vertical farm, rainwater irrigation system and photovoltaic panels as well as uniquely American features such as regional food trucks and the winding boardwalk that will circulate visitors to the exhibit.

Expo Milano 2015 is expected to attract more than 20 million visitors from May through October 2015.

According to James Biber, founder and principal of Biber Architects, “The pavilion itself is a scaffolding for ideas, a rethinking of the nature of the expo pavilion and of America as a force in the food world.”

Expo Milano 2015 is poised to become a historic exposition, attracting top architectural talent while activating a global dialogue about issues of food security, access and waste.

The United States is one of 147 participating countries addressing the expo’s theme, “Feeding the Planet, Energy for Life,” about the future of our food system and the challenge of feeding nine billion people nutritiously by 2050.

According to U.S. Secretary of State John Kerry, “The Milan World Expo of 2015 is a chance for us to share with the world the work that American scientists, chefs, entrepreneurs, farmers and fishermen all continue to do day in and day out and hopefully help people to understand the ways in which we can make progress in the future.”

After Expo Milano 2015, Biber Architects will continue working with Sawkill Lumber Co. to reclaim and repurpose the wood from the USA Pavilion.

First renderings of One World Observatory