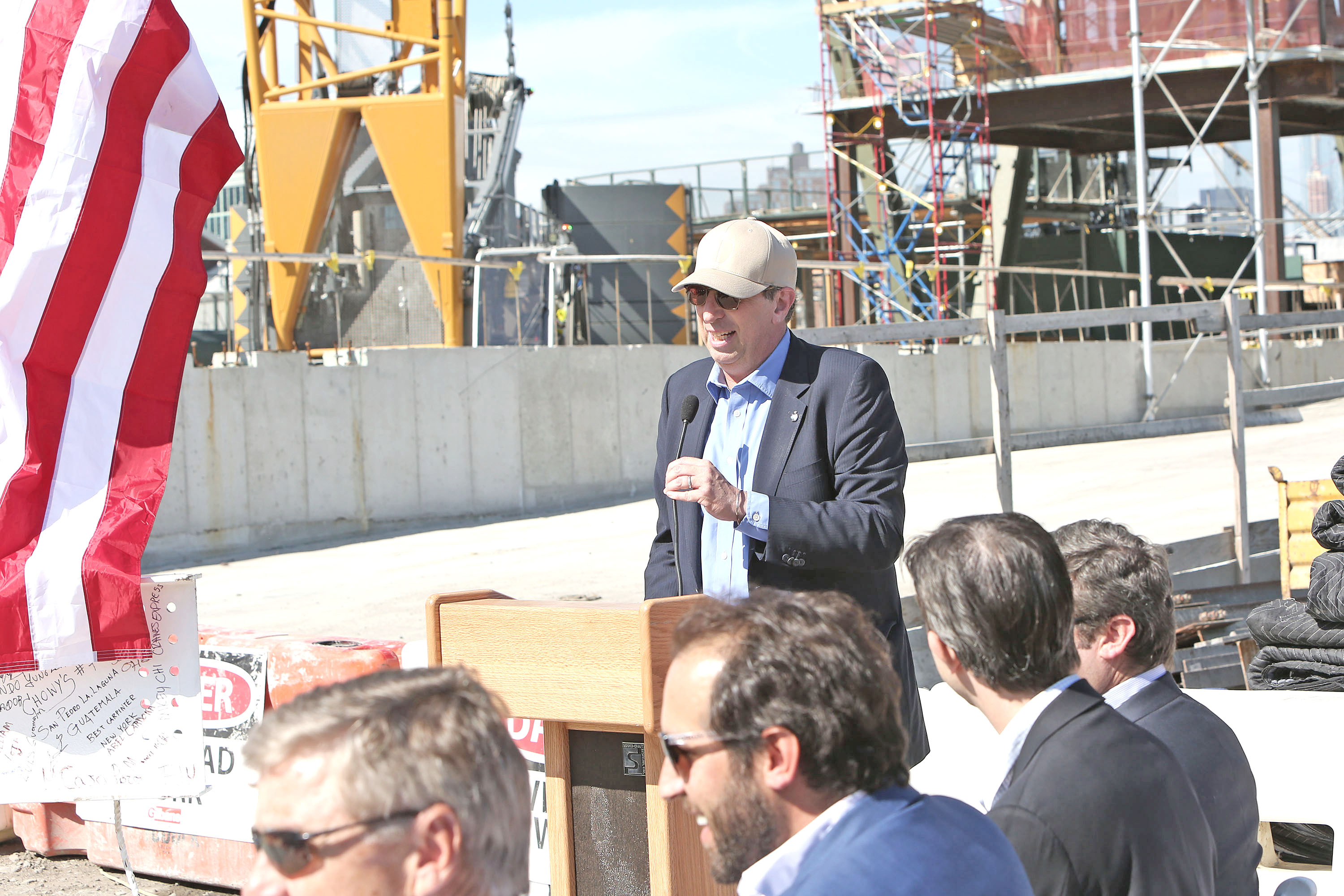 The traditional ceremony commemorated the completion of the steel superstructure of Dock 72, which will be the first ground-up office tower to be built in Brooklyn in more than three decades when it is completed in summer 2018.
At the end of the ceremony, the final beam of steel, which had been signed by all the members of the Dock 72 team, was lifted 17 stories (approximately 250 feet) to the uppermost floor of the building.

Dock 72 is expected to bring 4,000 workers to the Brooklyn Navy Yard daily and serve as a modern hub for the rapidly emerging technology and creative industries in the borough.

WeWork, which will occupy 222,000 s/f in the building, is serving as a co-developer and curator of the amenity spaces.
The project will include 35,000 s/f of amenities, including a 13,000 s/f food hall with specialty food and beverage offerings, a 15,000 s/f health and wellness center, a lecture-style conference center accommodating up to 200 people, an outdoor basketball court, multiple lounges for meeting and socializing, an open lawn with table games, an on-site bike valet, parking and direct access to a new city-wide ferry stop.

The heart of Dock 72 centers on the maritime and industrial history of the Yard and is designed to drive innovation and collaboration between tenants.

Inspired by the forms of the ships that were once built there, the building’s design is supported by 20 sets of 42-foot-tall V-shaped columns of steel that lift the structure above the floodplain and out of harms way in the event of a future superstorm.

The massing of the building steps down toward Wallabout Bay, creating over 18,000 s/f of terraces with views of the surrounding Navy Yard, Brooklyn, the East River, and Manhattan.

Dock 72 is one major component in the ongoing commercial renaissance at the Yard, which is emerging as a national model for sustainable urban manufacturing.

Building 77, a one million-square-foot property adjacent to Dock 72, is undergoing a $185 million renovation by the Brooklyn Navy Yard Development Corporation (BNYDC). The building will include a 60,000 s/f public Food Manufacturing Hub on the ground floor to be anchored by Russ & Daughters, and companies such as Lafayette 148 and Catbird occupying the remainder of the building.

Other projects underway include the redevelopment of Admiral’s Row, a $140 million project that will be anchored by a 74,000 s/f Wegmans Supermarket, and the expansion of Steiner Studios, NYC’s largest and most successful film and television studio.