While a number of cities still dominate, activity is spreading to an increased number of global markets as investors relax their risk tolerance.

New York saw $55.4 billion invested in the year to Q2 2014 — this equates to seven percent of global market share.
London, which registered $47.3 billion of investment, closed the gap on New York thanks to a 40.5 percent increase in activity; it is also the largest global market for cross-border investors.

“While gateway cities remain a primary focus for investors, interest in a broader spread of locations is increasingly apparent due to improved confidence and finance availability as well as a lack of supply in core cities.

“Risk appetites have expanded in the US and buyers in Europe and Asia are following suit, particularly where local partners can be found.

“Looking forward to 2015, the global economy is anticipated to be firmer but still vulnerable, with trends divergent country-by-country. One of the most notable drivers for this will be the polarization in monetary policy, which will be tightening in some areas but remaining loose elsewhere.”

The top 10 cities for global investment changed little from last year, with the exception of Dallas moving into 9th at the expense of Houston (11th).

Shanghai, Beijing, Miami and Stockholm join the top 20, while Toronto, Singapore, Moscow and Seoul fall out. Dubai and Dublin saw significant change and leaped into the top 50 from 186th and 82nd position respectively.

Top cities continue to be popular across multiple sectors with New York top in retail, multifamily and hospitality, London top for offices, Los Angeles top for industrial and Tokyo a top five market in retail, office and industrial. 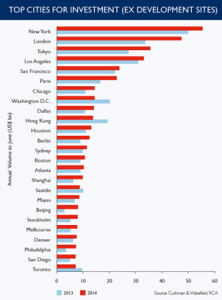 The report also states competition to buy will continue to push up prices, with prime yields down 13bp globally to seven percent last year and likely to at least match this in the year ahead.

While Europe remains the biggest area for foreign investment, it saw a 35 percent growth in cross-border buying last year, growth has actually been more rapid in the Americas (46 percent) and Asia (43 percent), underlining the truly global nature of the marketplace.

London remains by far the most favored market with a 14.1 percent share versus 5.5 percent for Paris and 4.9 percent for New York.

Overall, 13 of the top 30 are in EMEA, nine are in Asia, seven in North America and one in Latin America. The fastest growth was in Beijing, rising from 46th to 17th place, followed by Boston, Amsterdam, Madrid and Sao Paulo.

The biggest source of cross-border capital was the Americas, with $75.3 billion invested non-domestically, while Europeans are the number two international buyer but a significant share of this is targeted within the region.

American investors were the strongest players outside their own region last year, with $58.7 billion invested, 48 percent of the global total.

The fastest growing stream of international investment however has been Asian capital flowing out of the region. Asian global investment rose 56 percent last year compared to a 54 percent increase by American investors, 26 percent by Europeans and 13 percent by Middle Eastern and African players.

Typically, Asian players cross borders easily but much in the past has been within their own region. That has changed dramatically in recent years as Asian businesses have diversified abroad, focusing initially on gateway cities in the US and the UK but now spreading their net more widely, says the report.

David Hutchings, Head of EMEA Investment Strategy, said: “Core markets still offer attractive returns for core investors but those seeking higher returns are having to take on risk either in core markets or by targeting quality assets in second-tier locations.

However, caution is needed as real estate usage is evolving as tenants adjust to new technology, new working practices and demographic change.”