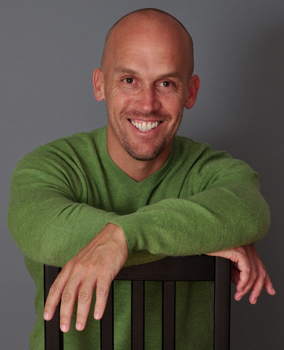 Matt Theriault, by his own admission, is “all over the place.”

His life aspirations range from the creative to the pedantic; he’s split his existence between pursuits such as breakdancing and serving in the US Marine Corps.

He’s also written a book called The Do Over and has become a “success coachˮ who shows people how to start over and begin a new life setting goals.

“I’m an accidental success coach that helps people pick themselves back up after a let-down and Do Over,ˮ reads his online profile.

Like most people who trade in enlightening others, Theriault has a story of overcoming adversity. His is a riches-to-rags-to-riches story and his own personal “do over.ˮ

He was once a successful music executive before he descended to poverty. Three years ago, he was bagging groceries for minimum wage. Now, he has a firm that has four employees and 30 independent teams across the country.

After quitting college one semester in, he signed up for the US Marine Corps, resulting in a six-year stint highlighted by a tour of duty during Desert Storm in the Persian Gulf.

He said his exit from the military was hastened after his superiors allowed him to leave early to take on a record contract.

For the next 15 years, he produced and marketed hip-hop acts through a small record label distributed by Caroline Records, which has artists such as Alabama Shakes and the Chemical Brothers.

One of the achievements of the label was a one-off deal with Eminem that came “before anyone knew who he was.”

Eventually, the label sank as technology weakened the appeal of CDs. “Digital downloads came along and it turned the whole industry upside down. In six quick months, I found myself divorced and bankrupt,” he said.

After six futile months in the job market, Theriault took a job more suited for a teenager on summer break because he was afraid of becoming homeless.

“I found that there’s not a whole lot of demand for an out-of-work music executive. So just to pay the bills and survive, I worked bagging groceries. I literally went from making seven figures a year to $7 an hour.”

He ultimately began working as a real estate agent with RE/MAX in Palos Verdes and studied investing because he said he wasn’t making enough money as an agent.

In 2009 he launched a podcast called YourDoOver which has become the top personal development podcast on iTunes.

He started Epic Real Estate, which is based in Los Angeles, and began investing in real estate locally before broadening to a national scale. The company has money tied into projects in Buffalo, Syracuse and New Jersey and is looking to enter the New York City real estate market.

“We’re looking to do it in New York City, but we’re still investigating… The economics have to make sense. It takes due diligence and we’re in the middle of that,” he said.

Aside from investing in real estate projects, the company also serves as a sort of educational platform for beginner investors.

One the firm’s offshoots, Epic Pro Academy, promises to provide students with “everything (they) need to get (them) on the fast track to real estate investment success.”

The firm also provides a service called Cashflow Savvy, which targets investors who don’t want to deal with the inconvenience of investing.

“To truly succeed in real estate, one must have a passion for it, and most people’s passion simply lies elsewhere… and that’s perfectly okay,” the service’s website read. “Simply put, Cashflow Savvy bridges the gaps in their own ‘hand selected’ markets for real estate investors of all experience levels so they can continue to take advantage of the greatest real estate market of our time… before the window closes.”

Theriault has compiled all of his lessons in his Epic Real Estate Investing podcast, which, according to its iTunes page, was made “in the spirit of Robert Kiyosaki’s Rich Dad Poor Dad.”

Thierault, who also described his podcast as “an alternative to Dave Ramsey, Suze Orman, Motley Fool and Jim Cramer,” is fashioning himself not as an expert who prescribes solutions, but rather a normal guy who presents possibilities.

“My goal with the online podcast is to position myself as the anti-guru and tell people that this is really difficult to do. It’s not easy. It’s a struggle. But the results are worth it… It’s more about letting people know what’s really possible and what it’s going to take to get there,” he said.
Theriault specializes in the art of generating “passive income,” something that has allowed him to avoid a daily dose of office internment.

“I was able to create enough residual income from my rental properties to cover my monthly living expenses… I wasn’t making a lot of money, but I didn’t have to get up and go to work every day,” he said.

From the silly to the sensible, New York agents share their holiday gift lists