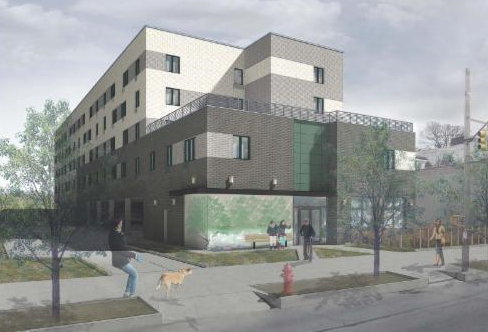 Construction has gotten underway on the new Cypress Senior Housing Residences in Brooklyn.

The new development will be constructed at 137 Jamaica Avenue on vacant land formerly owned by the City of New York.

Once constructed, the building will include a total of 53 affordable apartments for very low-income households in which the head of household is 62 years of age or older.

“It’s a good day whenever we put shovels in the ground for the affordable housing New Yorkers need. This isn’t just a building. It’s going to be a home and a part of this community. It means low-income seniors, so hard-hit by the rising rents in Brooklyn, will be able to stay in their community,” Mayor Bill de Blasio said.

“We are committed to keeping East New York affordable and making sure that new housing meets the needs of the families who live here today.  We’re proud to work with our community partners and local officials to get this project under way.”

The construction of the Cypress Senior Housing development has been financed under the de Blasio’s Housing New York: A Five-Borough, 10-Year Housing Plan.

The development will be designed by Heitler Houston Architects and will feature energy-efficient systems and Energy Star light fixtures and appliances in all apartments.

The building is expected to achieve a LEED for Homes Silver certification from the U.S. Green Building Council. Steven Winter Associates will act as the sustainability consultant on the project.

The total development cost of the project will be approximately $20,597,952.

The development will receive $8.9 million in HUD Section 202 funds. HPD will provide $2.3 million in City Capital and contribute Low-Income Housing Tax Credits. The National Equity Fund will act as tax credit investor. The project will receive $600,000 in Reso A.

The project will also receive $137,526 from the New York State Energy Research and Development Authority (NYSERDA).