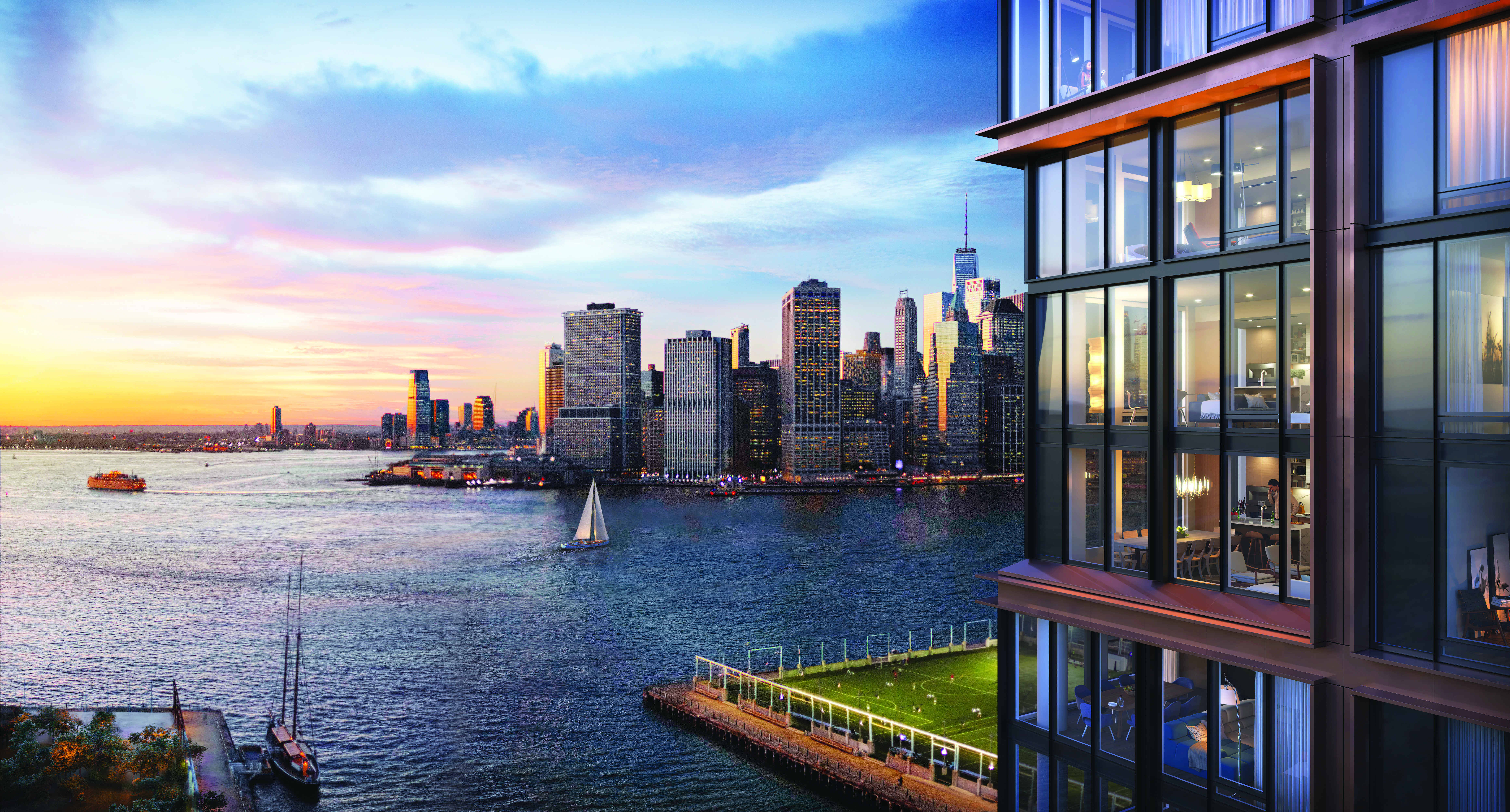 Quay Tower knocks it out of the live, work, play park

In the residential market, the phrase “live, work, play” has been uttered so many times, repeated again and again, ad nauseam, to the point that it’s disappeared into itself, its true meaning lost in the wind.

Ostensibly, it refers to a neighborhood with ready proximity to housing, offices and places to drink and dine, but since when are drinking and dining the only ways to “play”? What happened to running and jumping, climbing and sliding, passing and catching? What about real, honest to God play?

At the Quay Tower, there are restaurants and nightlife aplenty, but there are also ball fields and playscapes and running paths galore.

At a time when providing an active lifestyle is a hot commodity, few projects are better equipped than this Brooklyn Heights condo development.

The brainchild of RAL Companies and Oliver’s Realty Group with financing from Vanke US, the Quay Tower is a 30-story complex on the rise next to Brooklyn Bridge Park’s Pier 6.

Designed by Eran Chen, founding principal of the architecture firm ODA, the tower is being built by Suffolk construction and figures to be move-in ready by next summer.

Douglas Elliman launched the sales campaign for the 126-unit building on June 7 with an elaborate sales gallery next to the property with intricate three-dimensional models and a precise walk-through apartment that showcases the meticulous details crafted by the California-based interior designers at Marmol Radziner.

Only 13 units are included in the first wave of sales and asking prices range from $1.9 million for two-bedrooms to upwards of $12 million for five-bedroom penthouses.

Designed with simplicity in mind, the building has just five lines of apartments, each of which runs the length of the tower.

The four-bedroom A-line that runs along the southwest corner of the building and the B-line on the northwest side feature prime views of the Manhattan as well as their own private elevators.

Larger units also offer a host of family-friendly features, such as a Jack and Jill-style secondary bathroom with custom-made stools that can be stowed beneath the double-wide vanity, as well as a mudroom complete with a washer, dryer and heavy duty sink, perfect for rinsing down dirty clothes and gear after romps through the park.

To complete the active lifestyle motif, the building also offers a bike room where residents can license space, and a first-floor fitness center with standard workout equipment, a boxing corner and space for yoga, all with a view of the park.

Speaking of views, the tower offers several stunning vantage points of both Manhattan and Brooklyn.
Lines A and B have the most traditionally appealing sightlines, which are filled with the twinkling office towers of Manhattan. However, the three-bedroom C line and the larger two-bedroom units in the D line boast charming, tree-lined views of Brooklyn’s rising downtown and townhouse districts, respectively.
Line E, the smaller two-bedroom condos, overlook the neighboring docks in Red Hook, which may not be the most awe-inspiring view but it certainly provides the gritty, industrial chicness that Brooklyn has so intertwined itself with.

Plus, there are two rooftop lounges available to tenants, the family-oriented Sky Lounge on the south side and the more adult Sunset Lounge on the west, which comes equipped with a bar, fireplace and city views.

Other building amenities include an insulated music practice room — of particular interest to both aspiring musician as well as their parents — a second-floor children’s room, a 24-hour concierge and a first-floor pet washing station.

Each condo is smarthome-ready, meaning residents can hook up an Amazon Echo or Google Home to control lighting, shades and the HVAC system by voice.

Units are also outfitted with floor-to-ceiling windows, 8 inch oak panel floors and Gaggenau appliances.
Ron Radziner of Marmol Radziner said he and his team tried to make the inside of each unit match the urban style and beauty of the area outside the building.

“We wanted the interiors to speak to the surroundings and to feel authentic to the neighborhood and lifestyle of the future homeowner,” Radziner said. “To that end, we assembled a palette of materials that transition quietly from one space to the next and complement the views rather than try to compete with them.”

Chief among those materials are the unfinished, “leathered” quartz slabs used within for kitchen counters. Like so many elements in the units, including the metal kitchen fixtures and the rippled wall papers, the texture of the countertops gives the units a character that can literally be felt.

“We chose natural materials of varying textures that age well and have a hand-worked quality, to achieve a warm and inviting backdrop that is well-suited for both relaxing and entertaining,” Radziner said.

Molly Townsend, sales director for Quay Tower from Douglas Elliman Development Marketing, said much of the early interest in the building has come from people in Brooklyn Heights and Cobble Hill as well as Tribeca and the Upper West Side, most of whom are looking for living space as well as a plethora of on-site amenities.

So far, Townsend added, the access to Brooklyn Bridge Park and the waterfront have been the main attractions for prospective buyers.

“The word quay actually means a landing place built along a waterway or a place of embankment,” she said. “The whole building, the whole project is built around life at the water and people have really responded to that.”

DONE DEALS: No big secret to selling a special space