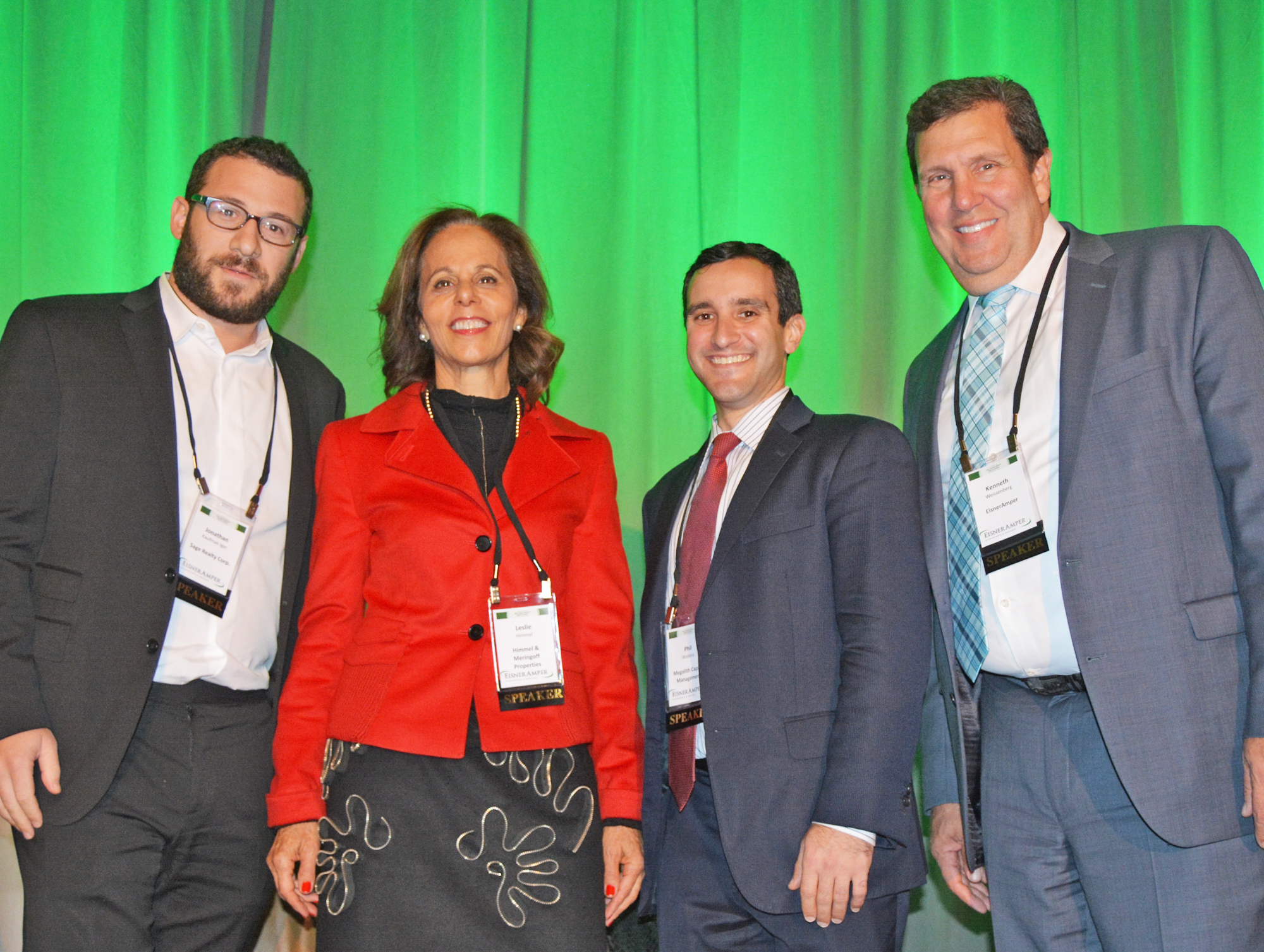 Owners always on lookout for value

Regardless of uncertainty in the market and a general slowdown in deal volume, significant capital is still lined up for deals in New York City. But are we in a correction?

One panelist, Himmel + Meringoff Properties founder Leslie Himmel, has built a two million-square-foot office empire over the past three decades, so Weissenberg asked her if it was still a good time to buy.
Himmel replied that for 32 years, she and Steve Meringoff have built their portfolio of secondary office buildings brick-by-brick in a conservative fashion, but they can be very opportunistic buyers when off-market deals come to the surface.

“However, being an opportunistic purchaser doesn’t really exist right now because you have zero interest rates and so much money flooding into New York,” she pointed out. “Buildings are selling at three, two, and even no caps.”

But she predicts there will be opportunities in the next 18 to 24 months as a supply of office space comes to market and interest rates go up.

“We fought hard to buy a great portfolio and keep it while times got tough,” she said. “We look forward to building it again.”

When he came on board in 2010, his firm lacked reinvestment capital, but starting in 2011 deployed over $120 million throughout its portfolio and methodically repositioned every building.

Right now, the firm is in the planning stages of 77 Water Street’s repositioning, where Iger is looking to raise rents from $45-$50 per square foot to $60-$65. It would like to repeat what it accomplished at 2 Gansevoort—a whopping jump from $32 per square foot to $86, although “we can’t take complete credit,” he laughed, noting that the Meatpacking District’s popularity also played a hand. Megalith has shifted its focus to primarily residential development and currently has a 800,000 square foot portfolio in various states of construction throughout Manhattan and Brooklyn, with one project in New Rochelle, reports principal Phil Watkins.

“Are we in a correction?” Weissenberg asked the three panelists.

“I wouldn’t call it a correction,” Iger replied. “What we’re starting to see — and what we hope to see in the next 12 to 18 months — is a reversion back to traditional underwriting.”

There have been properties that his firm has been trying to compete for on the investment level, whether core or value-add, but he’s competing against investors who are not traditional underwriting candidates, he explained. They’re looking at the assets as a flight to safety, while pension funds are happy to underwrite a three percent cash-on-cash return, completely unlevered.

“That’s not an area we can play in,” he said, and even though he sees some of that capital starting to dry up, there’s still plenty on the sidelines waiting to be employed. Overall, he has a positive outlook on the market, but prefers to wait for that reversion before jumping back in.

Himmel reported that residential, land sales, and retail have already been repriced. Office is still coveted, but real estate is all linked—so as vacancy rates start going up, so do shadow vacancies, and then we’ll see office repriced.

“Since we buy underperforming assets and reposition them, we believe there will be great opportunities,” she said. “The correction has not started yet in commercial here, but around the country it certainly has.”

Watkins has witnessed land transaction volumes drop 40 percent to 60 percent from where they were this time last year, and his company has not purchased any sites with the exception of a small tract in New Rochelle since 2013.

“What started to happen in 2014 didn’t make a lot of sense,” he exclaimed. “There was a perception in the marketplace that because one piece of land was worth $800 to $900 per buildable square feet to a purchaser that all land in the city was worth $800 to $900. Even M-zoned land went from $350 to $550.”
Investors who purchased sites nine to 18 months ago are struggling to get some of their development projects of the ground, he continued. Construction capital, both equity and debt, was also easier to come by back then, but a shift in sentiment has changed the pricing.

What he’s seeing, even on the value-add side, is while there hasn’t been a fall in pricing spread, sellers are trying to push for that outlier buyer willing to keep the pricing going.
However, if that buyer doesn’t come through, typically underwritten investors such as Megalith are all clustered in a more normalized valuation.

But is it a fall in pricing or a return to something justified, he asked — it’s all how you look at it.
“Are there opportunities outside of your core area that interests you?” Weissenberg asked.

“There are a lot of different ways to make money, but in the end, we can say that we’ve done really well over the past 32 years,” Himmel replied, noting that she and Meringoff have explored different avenues, including residential and expanding geographically.

“If you look at that from a strategic standpoint, we have a niche that’s narrow: secondary office buildings. We’re going to keep doing the same thing because it has worked.”

Iger replied that over the past year, his company has had a number of interesting conversations about its strategic direction.

“We ended up deciding the same thing, which is what we’ve been doing: developing, owning, leasing, and managing Class-A and Class-B south of 96th Street in Manhattan,” he said. “We’ve been doing a pretty good job at that and maximizing our returns. In the past five years, we have been able to reposition and prove value.”

At the same time, he acknowledged the dynamic office market and how it’s drastically changed over the past decade. He said his firm is exploring some concepts and looking into creating space that allows tenants to expand and contract as they need to.

Watkins noted that Megalith’s strategy is to find locations where the firm is ahead of the curve. “That is one way we can find value,” he said.

For instance, he has witnessed residents who want a transit-oriented urban lifestyle and downtown core and are willing to trade the New York City proper for 50 to 60 percent lower rents and amenity packages. Westchester is not normally where you picture youth-focused construction, but there is strong demand for product that will be the nicest in the market.

“I’m not saying that New Rochelle is going to be the next Brooklyn, but there is a change in those types of areas,” he said. “And if you’re willing to look, you can find real value.”