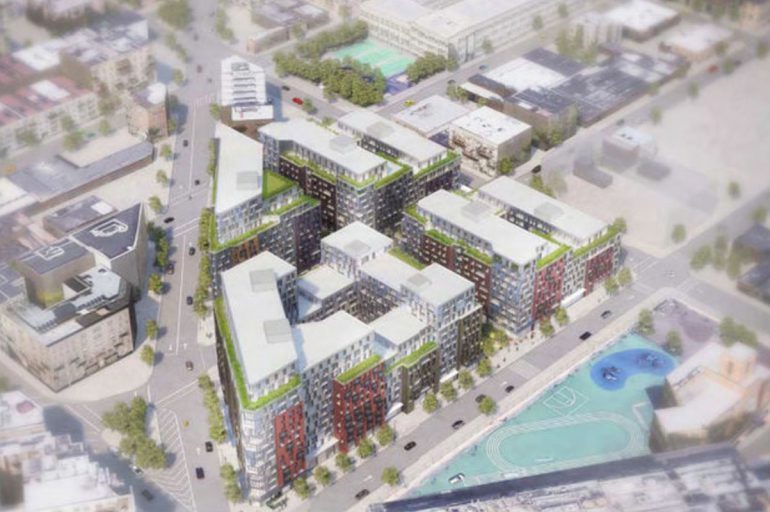 Brooklyn borough president Eric Adams spoke out against a developer’s plan for the former Pfizer site near the Broadway Triangle, calling for changes to the plan to include more affordable housing, bedroom mix diversity, and more local oversight.

“My recommendations for the future of the Broadway Triangle are guided by thousands of passionate Brooklynites whose concerns and feedback I have considered in recent months,” said Adams.

“Considering these land use applications have been about more than one site or project, it represents a chance to evaluate the direction of development in Williamsburg and ensure that we are creating opportunities for everyone to afford to raise healthy children and families in this neighborhood. Any rezoning that the City grants must affirm the standard of diverse, not segregated, opportunity.”’

It was just last month that Community Board 1 approved of the project by Harrison Realty LLC, a subsidiary of The Rabsky Group, after the developer announced it would pay the prevailing wage to building service workers, build 287 permanent affordable housing units, and hire local workers for both the construction and operation of the development. The project, dubbed 200 Harrison Avenue, would transform a long-vacant site in South Williamsburg into an eight-building, mixed-income residential and commercial development that would include 1,146 mixed-income residential units, 65,000 s/f of retail, a half-acre of public open space, and 405 parking spaces.

Adams’ recommendations, in conjunction with the ULURP process, were that approval of the requested rezoning be allowed only if the project would commit an additional 21,300 square feet of affordable housing at an average rent based on 60 percent area median income (AMI). He also recommended the developers be more specific on the bedroom unit mix for the proposed residential units, saying there needed to be a clearer picture of how the what the units mix would be.

The statement by Adams was met with support from community organizations like Churches United for Fair Housing (CUFFH), a group that represents 15 churches and more than 20,000 constituents.

“This proposed plan should be rejected at every step of the ULURP process. It will continue the trend of exclusionary housing development in the most segregated neighborhood in our city. This plan is anti-Black and anti-Latino and we are appalled that this project is still even being considered,” said CUFFH co-executive directors Jesus Gonzalez and Rob Solano in a press release.

The organization has taken a strong stance against the proposed development, saying it would be a step backwards for the community.

“We strongly feel that this plan should be rejected and sent back to the drawing board,” said the group in a statement. “Any plan for construction at this site must recognize and work to address the longstanding history of segregation and discrimination in the Broadway Triangle and create housing that accommodates the needs of all community members in the Bushwick, Bedford-Stuyvesant and Williamsburg neighborhoods – not just one portion of the community.”

In a statement, a spokesman for the project said that the plan garnered support from the local community board and is a positive addition to the neighborhood.

“When the facts of this proposal are presented and debated as they were at the Community Board, people understand that building nearly 1,200 units of mixed-income housing, creating local jobs and investing hundreds of millions of dollars in a site that has laid fallow for decades is worthy of support,” said Chris Singleton, spokesman for the project, in a statement.

“It is unfortunate that Borough President Adams would oppose a plan that gained the support of the most local form of government – Community Board 1.  As this process continues to unfold, we hope that the vulgar, hateful, anti-Semitic bullying is condemned, and not the project.”

ON THE SCENE: Commercial sales and exclusives under $10 million