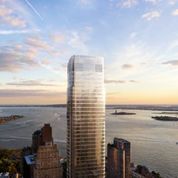 No surprises here; 50 West is a big hit

Times Equities has officially kicked off sales at the highly anticipated 50 West following a 30-day pre-launch when 57 of the 191 apartments were snapped up by buyers on a waiting list.

Francis Greenburger, chairman of TEI, said he’s thrilled, but not surprised by the response to the downtown skyline’s newest addition.

“It’s clear to us from our initial sales that buyers recognize the overall value proposition that 50 West represents — world-class views, design and amenities in the center of the New Downtown – at prices that are less than half of what one would pay to be in a Midtown luxury tower,” said Greenburger.

At 50 West’s sales gallery at 40 Rector Street, a block from the 50 West construction site, a steady stream of apartment hunters have checked out images of the units that are projected onto a curved screen that shows 180-degree images of different elevations from the building, showing off every view you’ll get from the 64-story tower when it opens in October 2016.

Penthouses and five-bedrooms, including full and half-floor residences, are grouped as part of the L Series, which Time Equities calls “50 West’s most remarkable” units. At the beginning of July, six penthouses had already been sold, according to brokers, including a seven-room, $18.63 million penthouse.

Each unit is outfitted with a private emergency generator. Master bathrooms will include radiant floor heating as well as Toto electronic toilets and the option for a built-in bidet. The floors and walls will be marble.

The kitchens will be based on oak floors against walnut cabinetry. They will include Miele and Sub-zero appliance packages. The units will be built upon an open flow floor plan with the living room, dining area and kitchen all meshing together.

Ceiling heights in the units will start at about 10 ft. with the highest topping out at 22 ft.

Four of the building’s floors are slated for amenities that will include a full library, children’s playroom, 18-person theater, yoga studio and a 60 ft. pool.

The entrance to the building will be dressed in a 6,000 s/f public plaza that will connect to the West Thames Pedestrian Bridge when it is completed. The plaza will also provide direct access to West and Washington Streets.
Helmut Jahn, the building’s architect, opted to coat the exterior in curved glass, which will allow all residents to enjoy views of the Hudson and East Rivers and downtown Manhattan.

Rob Singer, director of development for TEI commended the design. He said Jahn’s goal was to allow the glass’s curves to accentuate the views.

Singer also said that the glass serves more than aesthetic purposes, noting that the windows will be triple-paned to provide better sound and climate control.

The interiors were designed by Thomas Juul-Hansen with “warmth and modernism” in mind.

Original plans for 50 West included designating lower floors as a hotel. Singer said that plan was not “penciling out economically,” but the developer still saw advantages to only offering residences located several stories above ground level.

The result is the current office/apartment hybrid. Broker Lattanzio said that the offices were created to appeal to residents who might own their own professional practices, or small businesses, who will be able to stay near their family during the work day.

Singer said that the commercial spaces are already in demand, too. As well as the office condos, which will range from 280 to 830 s/f, there will be a restaurant and bar retail space on the first and second levels. The tower is also expected to be LEED certified.

The new construction was described by Lattanzio as an investment in the brisk revitalization of the Financial District, including the soon-to-be-finished (currently semi-operational) World Trade Center Transportation Hub. The station provides a PATH connection to New Jersey.

The neighborhood is now the fastest-growing school zone in New York, offers easy access to Wall Street and a bevy of high-end retail stores.

Time Equities is also quick to champion the allure of living within walking distance of such downtown institutions as Battery Park, Delmonico’s steak house and the Manhattan Sailing School.

Lattanzio said she expects a substantial amount of interest from international buyers looking to make a permanent move to New York City, or perhaps establish a satellite residence during their stay.

With the perceived value of the neighborhood increasing, Lattanzio is also optimistic that many current residents of the Financial District and downtown Manhattan will be drawn to the neighborhood’s newest skyscraper.

Perelman LLC contributed to the project as both a development consultant and a minority partner.

The Marketing Directors are the building’s sales and marketing consultant, and DBOX handled branding and creative.