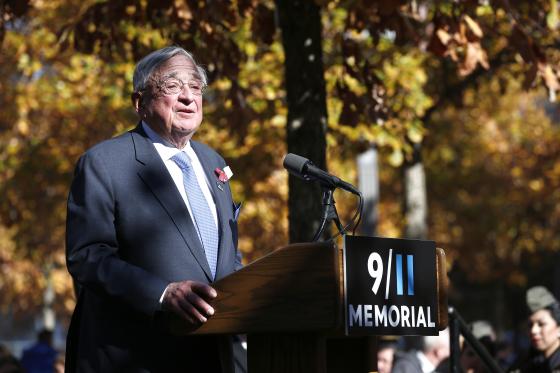 The New York real estate industry collectively saluted John Zuccotti this week as one of the cityʼs great men.

The Brookfield chairman and former deputy mayor of New York City, died November 20 at the age of 87 after a brief illness.

“John left an indelible mark on our city, from his time as City Planning Commissioner under John Lindsay and Deputy Mayor under Abe Beame, to his chairmanship of Brookfield Properties and the Real Estate Board of New York,” said Bill Rudin, CEO of Rudin Management.

“He will be remembered as one of New York City’s greats. The Association for a Better New York and the Rudin family express our deepest condolences to Susan, their children and grandchildren, and the entire Zuccotti family.ˮ

Longtime friend Larry Silverstein called Zuccotti a “cherished colleague as well as one of the great civic leaders of New York City history.”

The World Trade Center developer added, “Throughout his career and in all of his civic work, he was always motivated by his love for our great city. Everyone who cares about Lower Manhattan owes him a great deal for what he did to help the neighborhood recover in the aftermath of 9/11. He will be missed.”

Mr Zuccotti was chairman of Brookfield Asset Management Inc., and of counsel in the real estate department of the international law firm of Weil, Gotshal & Manges LLP.

He chaired the board of the Performing Arts Center at the World Trade Center, was a board member of the National September 11 Memorial Museum, and was a member of Governor Cuomo’s Airport Advisory Panel.
“John was a great inspiration, friend and mentor to all whom he touched at Brookfield, just as he was with countless New Yorkers throughout his long and storied career,” said Brookfield CEO Ric Clark in a statement to employees of the company.

“Brookfield and New York would not be the same without many decades of John’s wisdom, uncanny insights, and unbridled enthusiasm. John’s contributions have left an indelible imprint on Brookfield and he will be deeply missed.”

Mr Zuccotti was born on June 23, 1937 in Manhattan, son of Angelo and Gemma Zuccotti.

He graduated from Princeton University in 1959 and received his law degree from Yale University Law School in 1962. He was an officer in the United States Army. He lived with his wife, Susan, in Brooklyn, New York. They have three children and eight grandchildren.

Mr Zuccotti had a distinguished career in city and federal government; serving as First Deputy Mayor of the City of New York under Mayor Abraham Beame from 1975 through 1977. He was credit as playing a key role in saving the city from collapse during the fiscal crisis.

Mayor John Lindsay appointed him to the New York City Planning Commission in 1971 and then named him chairman in 1973, a position he held until 1975.

He played a leading role in the development process of major residential and commercial projects in the New York metropolitan area, and helped develop planned communities in such diverse places as Reston, Virginia and a Navajo reservation in Shiprock, New Mexico. He lectured on planning and development at numerous institutions including The New School for Social Research, Harvard, Columbia and Yale, and was appointed to the faculty of both Yale and Columbia law schools as an adjunct professor.