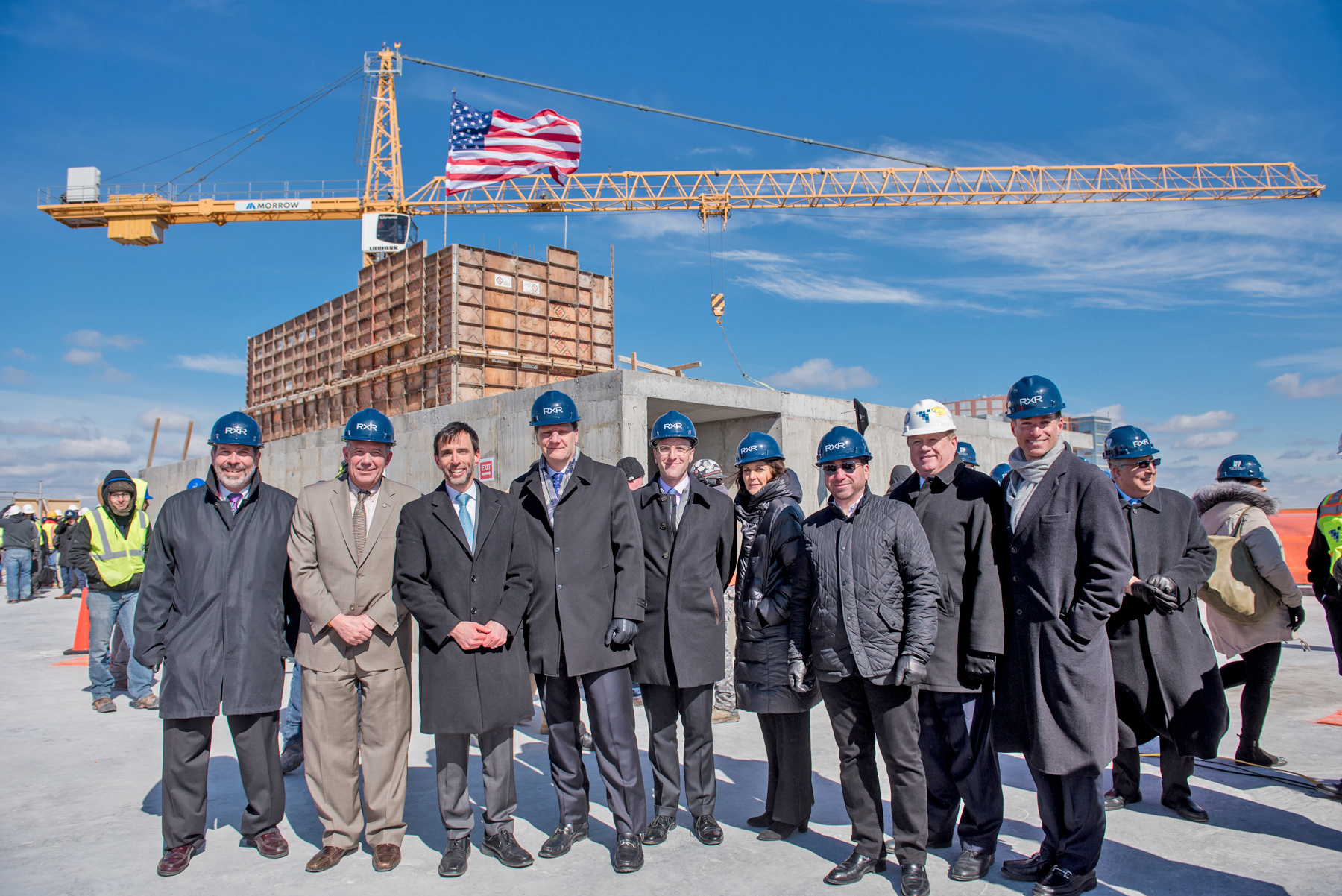 The City of New Rochelle joined its Master Developer, RXR Realty, to advance a reinvention of its downtown core expected to ultimately attract $4 billion in new investment.

First, city officials were joined by executives from RXR Realty to break ground on a new, dual-28-story, mixed-use complex at the site of the Church Street-Division Street parking garage at 26 South Division Street.

The group then proceeded to 587 Main Street, where the public- and private-sector partners together rose skyward to the roof above its 28th floor where they were joined by members of the construction team and City stakeholders for a topping-out ceremony on the building, for which ground had been broken only 16 months prior.

“The City of New Rochelle has invented a new and dynamic formula for downtown development that’s worthy of emulation by cities nationwide,” said Michael Maturo, President of RXR Realty.

“All of us at RXR are gratified to have been selected at the outset to help nurture this vision along its pathway to reality.”

“For too many years, our region’s suburban downtowns have failed to attract the level of investment and economic activity needed to maximize their growth and economic vitality,” said Seth Pinsky, an Executive Vice President at RXR.

“Responding to this, the City of New Rochelle developed a unique public-private partnership model that not only allowed the city’s leaders and citizens to reimagine the future of their downtown on paper, but to put into place a plan that is actually rapidly bearing fruit in reality. The City deserves enormous credit for its thoughtful and forward-thinking approach.”

“With these two important milestones, New Rochelle is well on track to achieving our community-guided vision for a vibrant, successful, diverse, and walkable downtown,” said Mayor Noam Bramson.
“RXR has been an outstanding partner, and these projects are catalyzing the biggest wave of real estate investment in New Rochelle’s modern history, with an emerging skyline that reflects a resurgent and hopeful confidence in our future.”

Following the 587 Main Street project, the Church-Division redevelopment is the second project
for RXR, the City’s Master Developer.

It is located in the newly-created Downtown Overlay Zoning District, which allows for approximately 6,370 new units of residential housing and approximately 3 million square-feet of new commercial space.

The two towers of the Church-Division project – at an estimated project cost of $329 million – will offer 730 rental apartment units.

The project’s total of approximately 904,000 s/f includes some 25,000 s/f of street level retail at the buildings’ base as well as parking for 698 vehicles.

The project has completed schematic design and is currently seeking the necessary planning approvals from the City of New Rochelle.

RXR will begin demolition and site work in March 2018 and anticipates securing all remaining necessary approvals for the project in July. Vertical construction is anticipated for December 2018, with delivery of the first tower in Q4 2020.

587 Main Street, at 28 stories, will contain 280 rental apartments, a tenth of which will be priced at affordable rates.

According to RXR, the two projects will generate over 1,000 construction jobs and, upon completion, an estimated 350 permanent positions.

While RXR is playing a master-planning role in the overall initiative, 15 projects are already underway by a spectrum of developers through the initiative.

The City has implemented an unprecedented fast-track growth plan that guarantees developers project approval in 90 days, an assurance unrivaled in the Tri-State area.

The master plan — which includes the rezoning of 279 acres of land around the city’s downtown train station — will also introduce a new arts and cultural district into the downtown area.

In addition, the plan aims to position New Rochelle as a tech leader in such sectors as information services, health tech, virtual reality and artificial intelligence.

New Rochelle was recently named one of 35 champion cities in Bloomberg Philanthropies’ 2018 Mayors Challenge for its plan to use virtual reality to model new construction and improve the quality of urban design.

Fisher Brothers gets everyone talking with Park Ave. plans