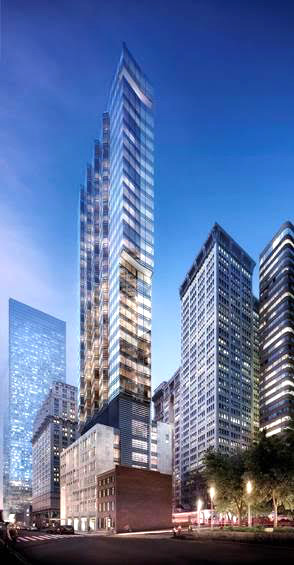 The building will have approximately 85 luxury residential condominiums and 7,000 s/f of retail on Greenwich Street, as well as the recently announced 476-seat elementary school serving District 2.

“We are happy to share that construction will start this year,” said Matthew Messinger, President & CEO of Trinity Place Holdings, Inc., owner and developer of the 77 Greenwich Street project.

“We are also proud to be a part of bringing a much needed new public school to Lower Manhattan. As Downtown Manhattan continues to see more than $30 billion of public and private investments come to fruition, 77 Greenwich is the latest milestone in the neighborhood’s evolution as a highly desirable live-work community.”

FXFOWLE Architects has designed the mixed-use tower, which is slated to rise approximately 500 ft. and will feature a pleated glass curtainwall above a limestone base.

Deborah Berke Partners is designing the residential interiors. The Marketing Directors will lead the marketing and sales effort for the luxury condominium residences.

All condos will start at an elevation of 150 feet, sitting above the school, allowing for panoramic views of New York Harbor, the Hudson River as well as the New York City skyline from every home in the building.”

Slated for completion in 2019, the development site is comprised of the former Syms clothing store and the 19th-century landmarked Dickey House, a federal-style townhouse constructed in the early 1800s. The Dickey House exterior will be restored and the interiors will be adaptively reused.

70 Pine, a 66-story tower that was originally constructed in 1932, has been completely reimagined and fully renovated. 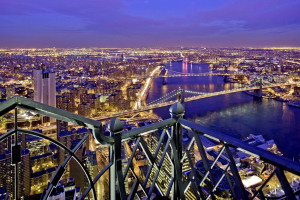 “70 Pine is one of the most spectacular properties I’ve ever had the opportunity to develop and I am excited to reintroduce the building to the city of New York,” said Adam R. Rose, co-president of Rose Associates.

“We’ve spent three years transforming this landmark into residential use, and we’ve also assembled an extraordinary collection of dining, retail & other lifestyle services.”

Along with development partner DTH Capital, Rose has overseen a full renovation of the 66-story 70 Pine.

The property is comprised of more than 600 rental apartments in studio, one-, two- and three-bedroom configurations. The tower tapers as it rises, which was a design requirement when the skyscraper was constructed. This results in numerous floors having wraparound terraces, and more than 150 apartments will feature private outdoor space.

“We have never before offered so many features and amenities in one location. A 70 Pine resident can access virtually every kind of service one can imagine without ever leaving the property,” said Rose.
Along with private residences, 70 Pine includes a 132-key residential hotel called Q&A and operated by Furnished Quarters.

La Palestra, an operator of upscale fitness and wellness centers, is creating its latest facility in 23,000 s/f of space, with additional amenities including game and screening rooms, bowling alley and golf simulators.

Among the most highly anticipated amenities is April Bloomfield and Ken Friedman restaurant and lounge that is planned for the building’s top floors.

Rose Associates is the exclusive leasing and managing agent for 70 Pine. Rents begin in the $3,000’s for a studio to just over $9,000 for a three-bedroom.

The 34-unit apartment property on the corner of West 153rd Street, is expected to be complete in late spring of 2016.

Justin Palmer, CEO of Synapse Development Group. “Taurus and Synapse are focused on redesigning urban living with a higher quality of construction in the multi-family market, and our building will operate using 80 to 90 percent less energy consumption when compared to traditional multi-family design.”