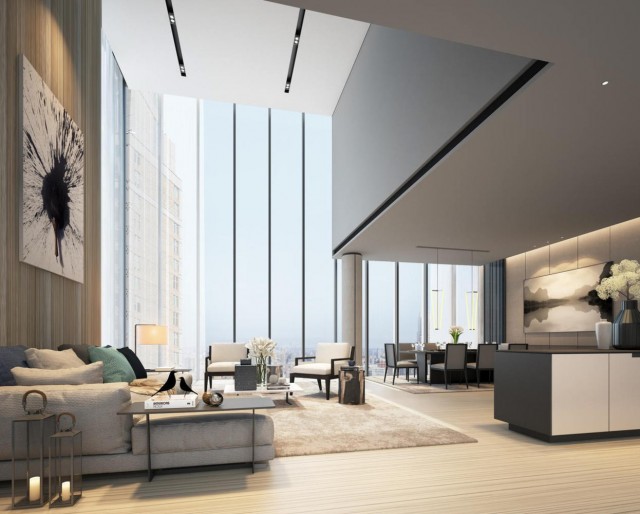 Euro Properties going with the flow

Spirits have always been oddly invested in the activities of mankind. Generations upon generations have sought their provenance because they tend to be temperamental when it comes to crop yields, rain fall or just general good fortune.

Now, a small corner of Manhattan has been designed to fit the specifications of the spirit world, in hopes of generating good luck and multimillion dollar sales.

Euro Properties, a Hong Kong development firm, is currently building 118 East 59th Street, a luxury condo building in Midtown that has design elements based on feng shui. The property, two blocks from Billionaire’s Row on 57th Street, was designed specifically to accommodate the movement of invisible forces.

Neo pointed to several design specifications that are meant to enhance the flow, such as the building’s north-facing orientation and its façade, which is divided into sections that twist at different angles.
Euro Properties may be seeking the favor of unseen forces, but it has steady footing in the physical realm, operating with a pragmatic strategy for attracting condo buyers.

For the past few years, luxury apartment prices in Manhattan have been on a steady rise, with 2015 being one of the high points.

Early last year, the record for the highest condo price ever was set, just down the street at Extell’s One 57 project. A penthouse unit at the building sold for $100.47 million.

Since then, questions have surfaced on how long prices will continue to rise. There are also growing concerns over the supposedly thinning numbers of condo buyers with $10 million or more to spare. Neo claims to have sidestepped this issue through strategic pricing and space allocation.

“I’m not concerned in the sense that I know how to differentiate the high-end and the stock, because a lot of the [luxury units currently on the market] are way too big,” Neo said.

Apartments in 119 East 59th Street occupy at least one full floor, ranging from 1,770 s/f to over 5,286 s/f. Two bedrooms in the building are on the lower end of the range, much smaller than similar units in nearby properties such as 432 Park Avenue and 53 West 53rd Street.

For instance, a three bedroom unit with 3,277 s/f of space has a price range of $16 to 18 million.
Meanwhile, the building’s penthouse, which has four bedrooms, three floors and 5,286 s/f of space, almost doubles the figure. “We haven’t decided, but it’s $38 to $40 million. If somebody pays $38 million, we’ll take it,” said Euro Properties’ Andy Wang.

The building, which stretches to 40 stories, is Euro Properties’ first project in New York City and the tallest it has ever built. It also claims the distinction of being the first solo project for a Chinese developer in the city.

In spite of the abundance of firsts, Neo declined to inflate his firm’s accomplishments.
“It’s only 29 units and one retail space. It’s 40 stories, but whether you do ten stories of 40 stories, it’s relative,” he said.

The project is expected to be the first of many in New York City for the development firm. Neo declined to provide specifics on their next target. However, he said that it will be in a place where “old wealth” resides.

The architect for the development was Soo K. Chan’s SCDA with design services from SLCE and Studio Becker. Williams New York worked on branding the project and Brown Harris Stevens is the exclusive agent.