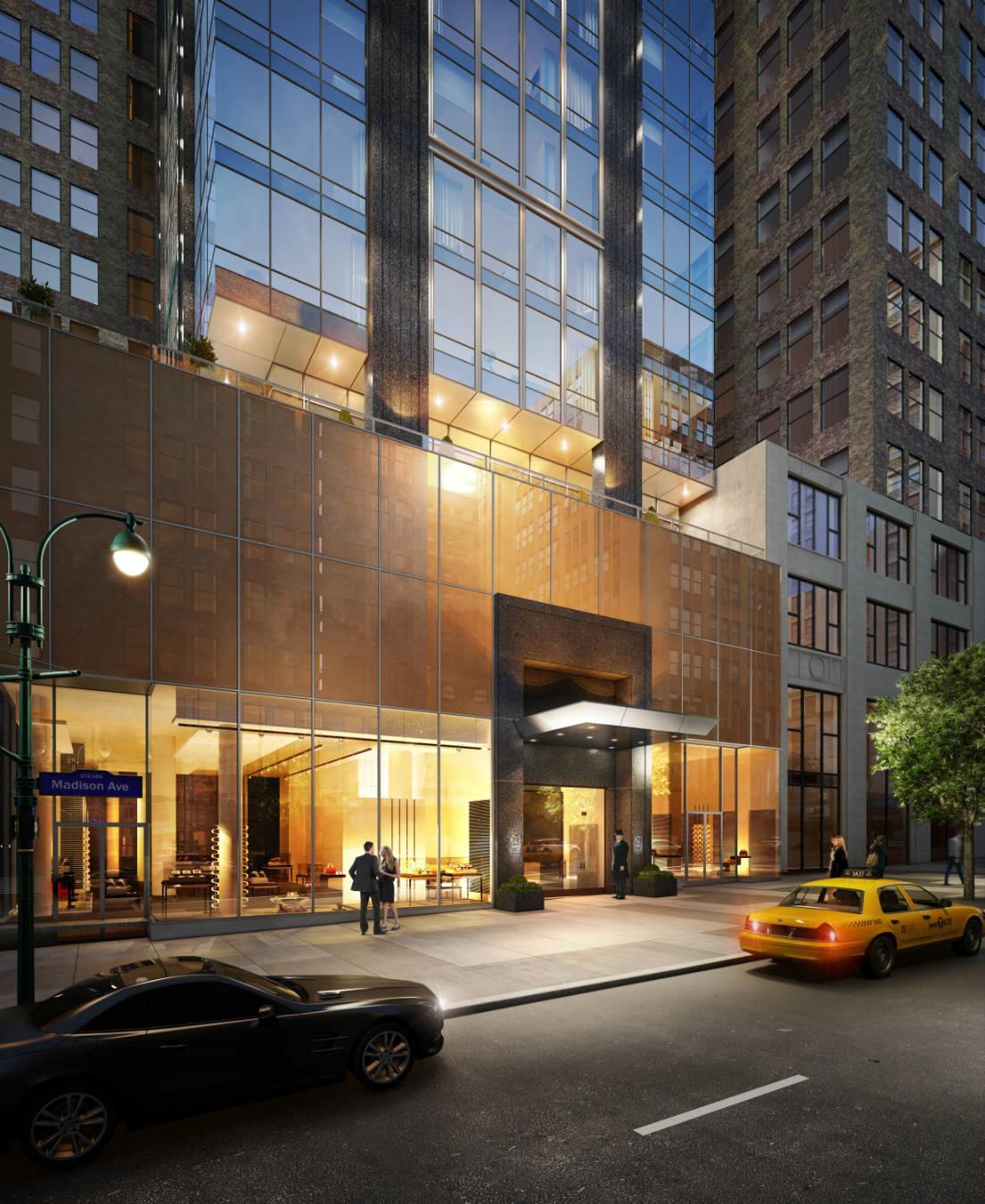 It is the first of the new buildings in the Midtown East corridor to offer immediate occupancy.
HFZ’s founder & managing principal, Ziel Feldman, commented, “We believe that Midtown East has a great future and delivers value at the same time. The neighborhood has transformed itself into one of the city’s most vibrant destinations.”

Halcyon features interiors by designer S. Russell Groves. High up in the building are two floors of amenities including a 52 ft. swimming pool and aqua spa, a fitness center, movement studio and sky lounge, and a children’s playroom and library with adjacent terrace located on the second floor.

Modern Spaces has launched sales for The Corner, a luxury condo in Long Island City.

Located at 47-28 11th Street and developed by a joint venture partnership between Kora Developers LLC and BK Developers, The Corner offers a selection of 23 homes in a mix of one-to-two bedrooms.

“The Corner is the first development offering new luxury homes in Long Island City this year and
we are very excited to kick-off the sales campaign,” said Eric Benaim, CEO and Founder of Modern Spaces.

“This development offers smartly designed contemporary residences with access to all of the amazing amenities this dynamic neighborhood has to offer as well as a quick commute to Manhattan. This is the perfect place for someone to set down roots.”

Designed by architecture firm Zproekt, The Corner is a seven-story property with an amenity package that includes a fitness center, sundeck, residents lounge, private storage and Butterfly MX, a new virtual doorman system that is accessed through smart phones. One-bedrooms start at $740,000. Two-bedrooms begin at $1,120,000.

“Inventory remains astoundingly low in Brooklyn and we are happy to be able to bring another set of residences to market with this newly revealed project,” said Aleksandra Scepanovic, managing director of Ideal Properties Group.

Each apartment has hardwood floors, stainless steel appliances and high ceilings. The building also features on-site laundry and a select number of the residences have outdoor spaces.

● TESSLER DEVELOPMENTS
New NoMad tower out of the ground

Tessler Developments announced construction is now out of ground for its residential tower 172 Madison Avenue.

Thirty percent of the apartments are already in contract following an April sales launch, according to the developer.

Occupancy is expected in September 2016 for the Karl Fischer-designed, 34-story glass tower located in the in-demand NoMad area, Efraim Tessler from Keller WIllims NYC is leading sales of the 69 units in the tower, where amenities include and indoor lap pool, health club, yoga/ballet room, pet-washing and bicycle rooms, children’s playroom and resident lounge, concierge and 24-hour doormen.

The ground floor is designed with two retail spaces.

Since launching pre-leasing in May, World Wide said it has received over 2,500 inquiries regarding the building’s 421 studio, one-, two-, and three bedroom rental units.

“We are thrilled to celebrate the grand opening of QLIC,” said David Lowenfeld, COO of The World Wide Group. “This is a significant milestone not only for World Wide Group, but for this neighborhood. With beautiful apartments and a host of amenities, QLIC is setting a new standard for residential living in Long Island City.”

QLIC features over 28,000 s/f of amenities, including a fitness center, swimming pool, outdoor barbecues and picnic areas, a garden, indoor parking and a bike room.

Partners on the project include Rabina Properties and Cammeby’s International Group. Aptsandlofts.com is the assigned leasing agent and Perkins Eastman is the architect on the team.
The building will welcome its first residents in September.

The five-story building has a Nantucket-style exterior and an amenity package that includes a gym, club room and outdoor pool, an enclosed garage and full access to the Harbor Club at Harbors-at-Haverstraw.
The building is pet-friendly and smoke-free. GDC recently announced that all of its new luxury rental developments will be smoke-free.