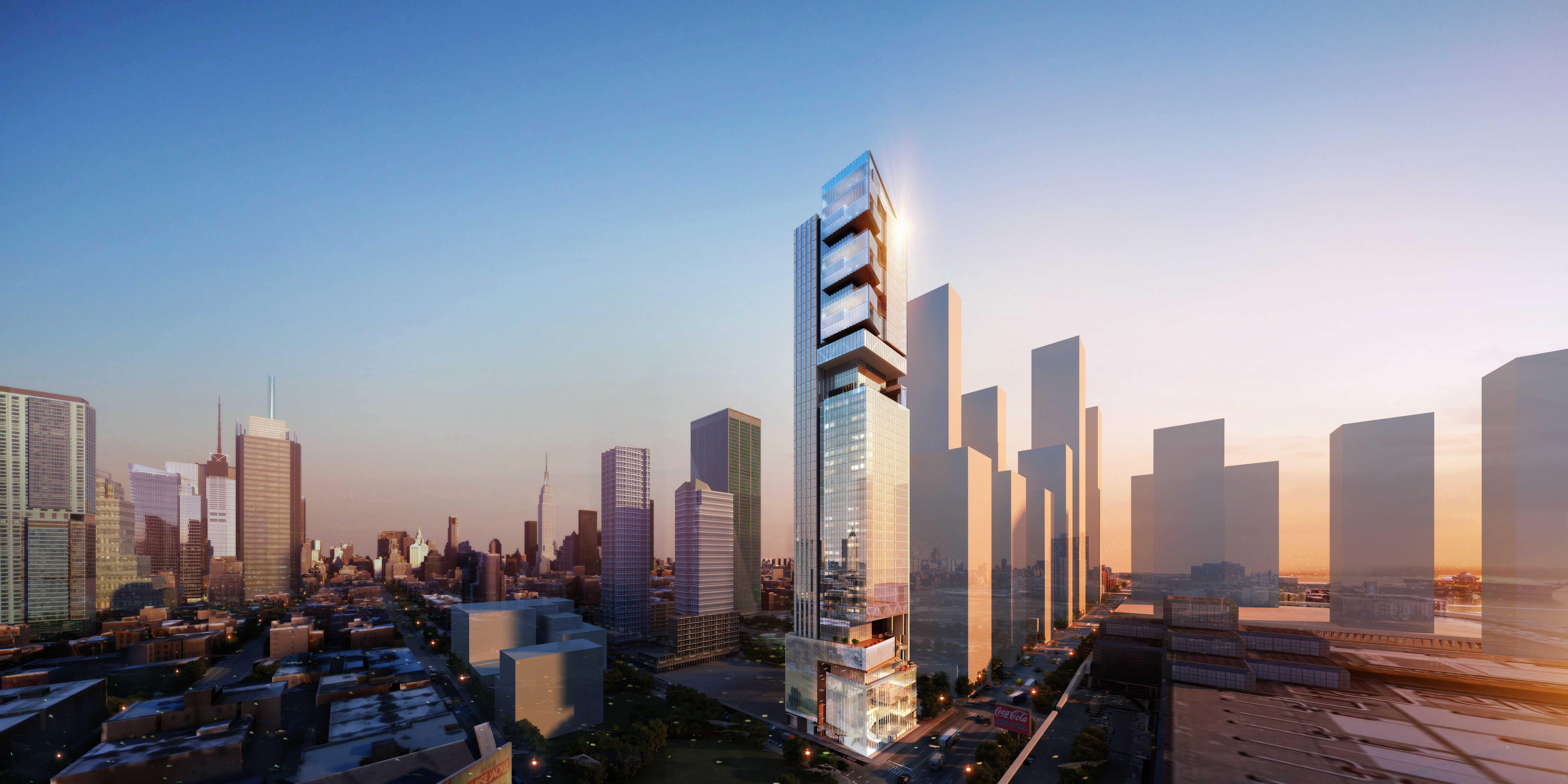 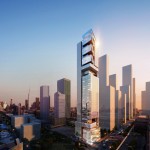 The partners will build a 380,000 s/f mixed-use project on the five adjacent parcels directly across from the Jacob Javits Center.
The tower will have 50 luxury condos in the top 15 floors; a 400-room hotel situated on 20 floors; the Shanghai Club, an exclusive membership club catering to the anticipated international buyers; office space; and ground-floor retail and lifestyle space.
“We are in a strong position to meet the demands of the market,” said Shang Dai, principal of Kuafu Properties, the co-developer and capital provider.
“We went into contract for the land at a time when Hudson Yards was beginning to gain prominence as a prime destination. By capitalizing on the timing in the market, we will be able to deliver a superior project designed for what we envision as the new frontier in the New York real estate landscape.”
The site was purchased for an estimated $62 million.
Designed by Archilier Architecture, the planned 47-story tower will have a modern appeal with a distinctive Asian influence.
The Shanghai Club will have a plethora of luxury amenities designed to appeal to Chinese and American business people as well as international buyers.
Jones Lang LaSalle has been retained to solicit propoals from high-end hotel brands. Groundbreaking slated for the second quarter of 2015.

●the naftali group
One Morningside Park tops out

The Naftali Group has launched sales at The Seymour, a new 12-story apartment building at 142 West 23rd Street.
The 49-unit luxury condo is named after the “Seymour Club,” a historic club once located on the site and run by New York’s 18th governor, Horatio Seymour. 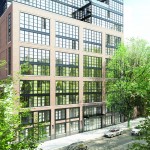 Miki Naftali, founder and CEO of the Naftali Group, worked with architects Goldstein Hill & West to create the brick-and-metal building with floor-to-ceiling casement windows.
The lobby and amenities are designed by McGinley Design, with residential finishes by Rottet Studio.
“We worked with the best craftsmen and designers and collaborated to create homes that have great attention to detail,” said Naftali.
The one, two and three-bedrooms range from 720 to 2,029 s/f with prices starting at $1.2 million.
“This building has what today’s buyers want: history and character combined with modern indoor- and outdoor-amenities in a hot neighborhood,” said Alexa Lambert, of Stribling Marketing Associates, the exclusive sales and marketing firm.
The building will offer residents a fitness center, lounge and a separate screening lounge, a full time doorman, concierge, private storage units and bicycle storage.
Occupancy is expected in the third quarter of 2015.

The Stahl Organization and Halstead Property Development Marketing announced that Downtown Brooklyn’s 388 Bridge Street, currently the borough’s tallest tower, is now 75 percent leased.
The 590 ft., 53-story structure is a 378-unit hybrid that includes 234 rental apartments, 104 condominiums and 40 penthouse residences.
Leasing launched earlier this year and the building has proven popular among a range of renters from young professionals and families to young couples.
Gregg Wolpert, co-president of the Stahl Organization, said he expects that the remaining 55 apartments to be leased by this Fall.
Remaining apartments vary from 491 to 1,166 s/f and priced from $2,730 to $5,995 per month for a two-bedroom apartment.

Ann/Nassau Realty, LLC and Triumph Property Group announced that The Lara, located at 113 Nassau Street in the Financial District, is now fully leased.
The SLCE-designed, 30-story, 168-unit rental building, between Ann and Beekman Streets, began leasing the last week of December 2013.
“The Financial District is experiencing a remarkable growth period, with new restaurants, retail, museums and real estate making headlines by the day,” said Adam Disick, CEO of Triumph Property Group, the exclusive marketing and leasing agent for The Lara.
“The Lara brought to the neighborhood a thoughtfully designed, ideally located building with high-quality residences at attainable price points, and we believe this led to its quick lease-out.”

The Heller Organization has completed leasing at 101 Bedford Avenue, Williamsburg’s largest luxury rental building.
The 351-unit mixed-use building is made up of four attached eight-story residences, spanning Bedford Avenue between North 11th and 12th Streets, and featuring a double-height lobby entrance directly facing McCarren Park on North 12th Street.
“As one of Williamsburg’s most luxurious residential developments, 101 Bedford deservingly commands some of the highest rents in the area and offers one of the most spectacular amenity packages ever built,” said Adam Heller, president of the firm.
“The location, design and amenities were so exceptional that people were inherently drawn to it and we completed the program within months.”

With construction progressing at The Modern, the luxury apartment community in Fort Lee, NJ, SJP Residential has announced the launch of Priority Registration to provide prospective residents with exclusive notifications and information regarding leasing opportunities. 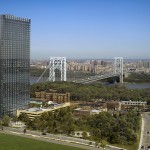 The 47-story glass tower features lifestyle services that have never before been available in high-rise residential development, including 75,000 s/f of indoor and outdoor resort-style amenities exclusively available for residents.
Prospective residents who sign up for Priority Registration will be among the first to be contacted about leasing opportunities in advance of a public grand opening.
A leasing office and several fully furnished model apartments are planned to open in early fall 2014. The Marketing Directors is serving as the building’s exclusive leasing and marketing agent.
Comprising 450 luxury apartments, The Modern will feature a mix of studios, one-, two-, and three-bedroom rentals, each with an open floor plan, floor-to-ceiling glass windows, walk-in closets, washers and dryers, and energy-efficient heating and cooling systems.
Outdoor amenities will include a pool, volleyball and basketball courts, a rolling lawn, barbecue stations, covered dog walking area and pet spa. An indoor parking garage will be located with direct access to the building.
SJP will create a 1.75-acre landscaped public park outside the tower that will include water features and walking paths and host a 7,000 s/f restaurant.
SJP will also develop a 13,000 s/f public theater and museum building to be donated to the Borough of Fort Lee.
SJP is developing The Modern in partnership with Prudential Real Estate Investors and Northwestern Mutual Life Insurance Company.
The tower is part of a larger mixed-use redevelopment of a 16-acre site that will contain 165,000 s/fof retail in an adjoining development parcel.

●lennar
One Avenue opens, another starts

Homebuilder Lennar ralled Weehawken town officials to officially open the newest luxury condo building on the Hudson River waterfront: 1000 Avenue at Port Imperial.
The new, 74-unit building is the first of five Lennar has planned for its Manhattan-facing waterfront property within the Port Imperial master planned community.
Known as “The Avenue Collection,” the buildings will comprise luxury condos and hotel-like amenities and services. 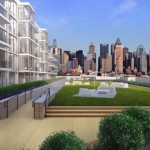 Fred Rothman, regional president of Lennar, said that the appeal of living on Weehawken’s emerging waterfront has led to strong pre-construction sales activity — already 60 percent sold the builder has already broken ground on the second property.
1200 Avenue at Port Imperial will feature 103 luxury condos, a landscaped third-floor roof deck with an outdoor pool. Designed by Handel Architects, 1000 Avenue offers two- and three-bedrooms ranging from $1.1 million to $2 million, with initial occupancy slated for this this month.
The Avenue Collection is part of a $2 billion master-planned Port Imperial community which stretches two miles of Hudson River waterfront across three municipalities. It offers residents access to a waterfront promenade with shops, restaurants, parks and an intermodal transportation system.