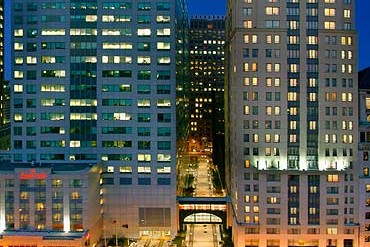 “We are delighted to have worked with KTB in completing this historic transaction for Korean investors.” said Edward Shugrue III, the CEO of commercial real estate investment firm Talmage, which served as US advisor for KTB. “Korean investors have been very active in U.S. mezzanine debt. This is one of the first transactions in which Korean investors have originated a whole loan directly in New York. With attractive rates and increasing track record of transactions, we expect KTB to be an active player in providing real estate debt capital in the U.S.”

When New York Marriott at the Brooklyn Bridge first opened in 1998, it was the first newly built, branded hotel in the borough in 64 years, according to a Marriott press release. The new loan comes four months after  Muss completed a $45 million renovation of the property. The hotel, which is located at 333 Adams Street, was redesigned by Krause + Sawyer. The improvements involved 44,000 s/f of event and meeting space as well as the front desk, guest rooms and the M Club Lounge.

KTB Asset Management, which is a subsidiary of KTB Financial Group, will manage the loan for several Korean institutional investors. Cushman & Wakefield Global Hospitality represented Muss Development in the transaction.

MAPIC gets underway in Cannes