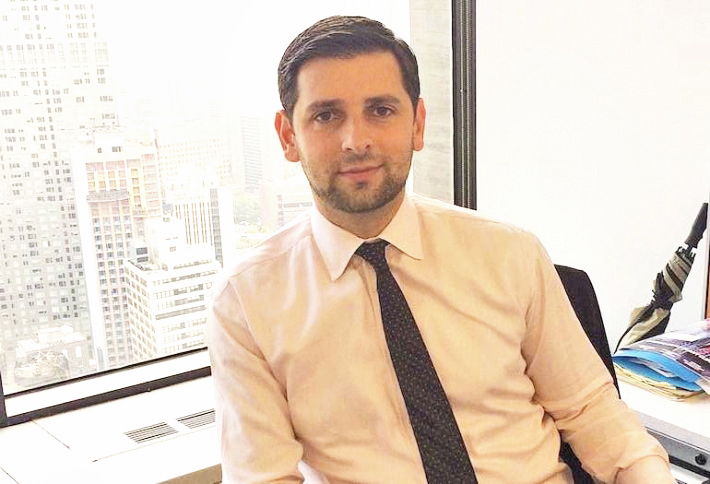 Multifamily veteran has his eye on the bigger picture

Erik Yankelovich’s position of senior director of investment sales still keeps him on his toes, after 15 years in the commercial real estate business.

A native of the former Soviet Union, Yankelovich emigrated to the United States in 1990, when his family settled in Brooklyn. After high school, he went to Stony Brook University to study computer science.

It was during college that his then-girlfriend, now his wife, suggested that he would be a good fit for commercial real estate, after she got a taste of the industry through an internship with an investment sales broker.

“I think she kind of saw that I enjoyed talking to people and negotiating, and it just seemed like a natural fit to deal with people,” Yankelovich told Real Estate Weekly. “I certainly would like to think I owe it to her; she’s been proven right.”

After graduating, Yankelovich began working at a small firm in Brooklyn doing investment sales and leasing. The firm was primarily residential, but Yankelovich felt a natural pull towards the commercial side of the business.

Two years in, he realized that having a bigger platform and exposure was crucial to keeping seasoned investors from walking away from a deal. He needed to move to a bigger firm if he wanted to continue getting better in the business, and that’s when he heard about a job opening at GFI Realty.

“It certainly was a struggle in the beginning for me, but once I came into GFI it was easier,” said Yankelovich. “I was in the right environment with the right backing and training and tools to deal with people who were ready, willing and able.”

Most of his deals average between $5 million and $25 million, and he focuses on multifamily properties in Brooklyn, particularly the areas of East Flatbush, Ditmas Park, Prospect Park South, Midwood, and Sheepshead Bay.

“More investors that traditionally haven’t been in these areas are realizing that they can get a great product with great upside and returns from the get-go,” said Yankelovich.

One of his most notable deals came in December 2014, when he represented the buyer and seller of El Greco Diner, a Sheepshead Bay eatery on Emmons Avenue that had been a neighborhood staple for 40 years.
Rybak Development & Construction purchased the diner for $13 million, with plans to demolish the building and build a 90,000 s/f condo building with ground-floor space retail.

The same month, Yankelovich was the sole broker in a deal for an an 890-unit building in Prospect Lefferts Garden that sold for $25.7 million, after being purchased in 2010 for $9.8 million. The sale price worked out to $295 per unit, a record high for the area, recalled Yankelovich.

Though many of the neighborhoods Yankelovich has been working in have been attracting increasing attention from investors, he has seen a shift in the market lately.

“I think we’re seeing a bit of a pullback from buyers because things have gotten a little out of hand; some of the asking prices have been really up there,” he said.

Yankelovich credits his success in real estate to the relationships he’s developed over the years.
“The longer you’re in the business, the more people you get to know and the stronger relationships with clients you get,” he said.

“The group here, I’ve been here long enough where I feel like it’s the right group of people, and we collaborate pretty often.”

While GFI has a strong foothold in the multifamily sector, Yankelovich and his firm are looking to grow and do more deals in other asset classes, such as creative office and conversion deals that have been cropping up in neighborhoods like Bushwick, Gowanus, and Sunset Park.

And they’re already getting in the game — in July, GFI arranged the $195 million sale of a 656,000 s/f warehouse in Long Island City to Westbrook Partners and Innovo Property Group. The joint venture plans to turn the warehouse into office space.

When he’s not working, Yankelovich spends his free time with his wife and two young daughters at their home in Manhattan Beach, Brooklyn.

“It’s a pretty crazy business,” said Yankelovich. “It’s a business that keeps you on your toes, it’s a constant roller coaster ride. You never know what you’re going to get out of your day, it keeps you feeling alive, not having the same thing happening on a regular basis.”