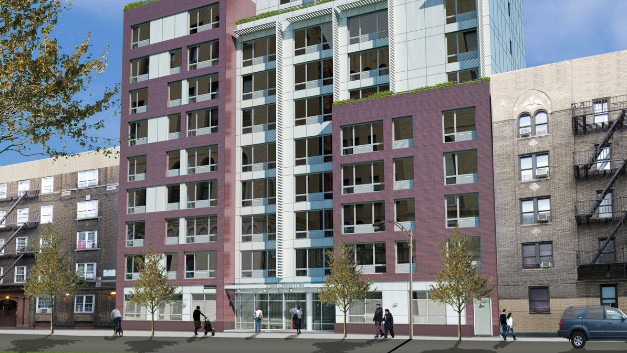 Creston Avenue Residence at 2388 Creston Avenue, in the Fordham section of the Bronx, has 66 affordable homes for low-income tenants and residents with special needs, including veterans.

The MRT was established by Governor Cuomo in 2011 to identify ways to make taxpayer saving on Medicaid that would still provide positive therapeutic results for Medicaid client. The team identified billions in savings, of which over $300 million has been invested in supportive housing.

Experts in medical policy have recognized that stable housing with co-located social service support is intrinsic to furthering recovery and sobriety. The MRT found that high-need Medicaid clients were not being helped by cyclic admissions to hospitals that have also been straining the State’s expenditures.

The MRT Capital Program forges interagency collaboration with the New York State Office of Mental Health (OMH) to fund social service support for tenants with psychiatric disabilities as well as provide an annual stipend for operating expenses for supportive housing.

An opening ceremony for Creston Avenue recently was attended by officials from the New York State Homes and Community Renewal (HCR), as well as developers from Volunteers of America-Greater NY and The Housing Collaborative LLC .

Darryl C. Towns, Commissioner/CEO of New York State Homes and Community Renewal, said, “Most of these folks are afflicted with disabilities and chronic health conditions that force them to rely on emergency rooms for care and faced frequent and lengthy hospital admissions.

“That’s why HCR is proud to have developed this new supportive housing with our sister government agencies, the Department of Health, the Homeless Housing Assistance Corporation at the Office of Temporary and Disability Assistance (OTDA), and the Office of Mental Health. We congratulate our community partners the Volunteers of America and The Housing Collaborative on bringing such an important development to completion that strengthens the community and our state.”

“At the Governor’s direction, state agencies are increasingly partnering on projects like this that will better meet the needs of homeless individuals, recognizing the connection between housing and health,” said Sharon Devine, Executive Deputy Commissioner of the Office of Temporary and Disability Assistance (OTDA), which oversees the Homeless Housing and Assistance Program (HHAP). “Supportive housing provides much-needed stability along with the services necessary to avoid homelessness.”

Since 2012, the state has financed 1,074 units with Medicaid Redesign Team funding.

Multifamily investors believe affordable is key word, even when it comes to luxury