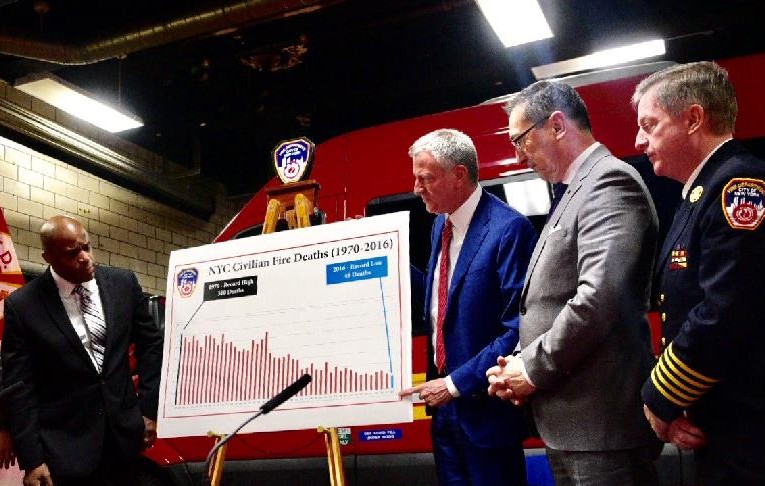 2016 was the Big Apple’s safest year in terms of fire fatalities, according to the FDNY.

It represents a 19 percent decline over the 2015 numbers, and a 17 percent drop from the previous record low of 58 fire-related deaths in 2012. The FDNY also reported a nine percent reduction in “serious fires.”

“We pushed ourselves to save even more lives in 2016 – embarking on a life-saving citywide smoke alarm program that has reached tens of thousands of homes – and we’ve seen the outstanding results with a historic 100-year low for fire fatalities in our city,” said Fire Department of New York Commissioner Daniel Nigro.

“I’m very proud of all our fire and EMS members who worked hard this year to achieve this historic milestone, and – as we enter a new year – we commit again to doing all we can to protect, serve and educate New Yorkers to keep them safe from fire.”

In addition to the significant and commendable work of the FDNY, fire sprinkler systems have also had a tremendous life and property savings impact in New York City. According to the National Fire Protection Association, water-based fire protection systems reduce fire deaths by 82 percent and property damage by 68 percent.

“Aggressive improvements to fire code and public safety laws following the Happy Land Social Club fire in 1990, two deadly high-rise fires in 1998 and the Deutsche Bank fire in 2007 have collectively led to landmark changes which continue to save lives today.”

Passed in 1973, New York City Local Law 5 mandated that all high-rise office buildings in New York City that exceed 100 feet tall have a sprinkler system or pressurized and compartmentalized stairwells.

This legislation followed two fatal 1970 office building fires which resulted in five fatalities and dozens of injuries. That year, the city had 310 fire related deaths. Since then, there has been a gradual and significant 85 percent reduction in fire fatalities leading to this year’s record numbers.

In 1999, Local Law 10 was passed, mandating the installation of fire sprinklers in all newly constructed multifamily dwellings with three or more units.

It also applied to existing buildings undergoing alterations or renovations with costs totaling more than 50% of its value, and established stricter inspection and maintenance standards.

“Sprinklers have repeatedly proved to save lives and reduce property damage, even before the Fire Department arrives on the scene. If trapped in a fire today, a victim has only about three minutes to get out because modern fires grow incredibly toxic and hot in just a matter of minutes,” said Patrick Dolan, Steamfitters Local 638 President.

According to Underwriters Laboratories, fires today are more toxic and burn 800 percent faster because of petroleum-based synthetics in newer furnishings.