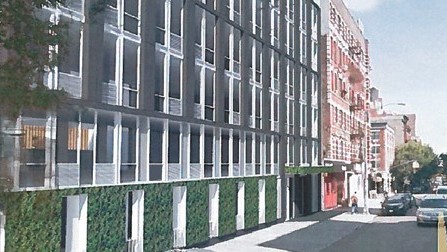 The developer of a planned residential building at the site of the old Peter Stuyvesant Post Office on 14th Street is still hoping to add an additional four stories to what was originally planned as an eight-story structure.

Benenson Capital Partners, whose request for a required zoning variance to increase the building height was shot down in July by a committee of Community Board 3, is heading to the Board of Standards and Appeals today (Tuesday).

While the community board’s unanimous vote in opposition to the variance was  advisory, a decision made by the BSA would be official.

The developer had previously argued that an additional few floors was necessary to make the project economically viable, due to costs related to underground water conditions at the site.

The East 14th Street property was used as a Post Office from 1953 to 2014. In 2015, Benenson, along with partner Mack Real Estate Group, announced a plan for a 114-unit building with ground floor retail at the site at 432 East 14th Street.

In an economic analysis report, filed by East 14th Street Owners LLClast October found that groundwater levels encountered at the site were “higher than normally encountered in this part of Manhattan.” A likely explanation, it went on, was that the site is located at the southern edge of an old streambed and the result is that “around the clock” de-watering during construction of the foundation is required. The problem was described as a “local” one, impacting the site specifically as opposed to general subsurface conditions in the immediate vicinity of the location.

A spokesman for the developer said, “Very early in this BSA process, we met extensively with the community, heard their issues and in some instances made changes based on their comments and recommendations. We look forward to the BSA hearing and the opportunity to be heard on the merits of our application and remaining a part of this community for many decades to come.”

The developer has proposed two buildings, one eight stories and one 12 stories with 43 studio apartments, 82 one-bedrooms and 30 two-bedrooms for a total of 155 units.  Out of those, 31 (20 percent) would be designated affordable.

Community groups opposed to the plan are expected to turn out for the hearing. One of those groups, the Greenwich Village Society for Historic Preservation has also said previously that raising the height of the building to reach 12 stories would make it out of context with the neighborhood.

GVSHP spokesman Andrew Berman said, “Our objection is based on the scale but also on the principle. They’re asking for a more than 25 percent increase in floor area and a more than 50 percent height increase. Their basis (for argument) is groundwater, which is applicable to countless sites in Manhattan. So if they deserve a variance then everyone else does as well. You’re only supposed to (get a variance) if you have a hardship that’s unique.”