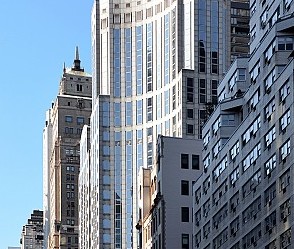 Founded in 1875, Audemars Piquet, known for manufacturing highly stylized and complicated mechanical watches, is moving out of 3,300 s/f on the building’s 20th floor. It expects to take occupancy of its new offices during the 4th quarter of this year.

Marc Horowitz, Senior Vice President and National Director of Office Leasing at Cohen Brothers Realty Corporation, represented both the tenant and landlord in the 11-year leasing transaction. Asking rent for the 29th floor at Tower 57, which is best known for its  curved façade, was $95 a square foot.

Opened in 1986, from plans by the architectural firm of Kohn Pederson Fox, Tower 57, aka 135 East 57th Street, was acquired by Charles S. Cohen in 1997. He refurbished and transformed the property’s adjoining vest pocket park into a public space in 2001.

One of the world’s oldest watch manufacturers and still owned by its founding families, Audemars Puquet is considered by many experts and aficionados to be one of the most prestigious companies in its field and a leader in haute horology.

IN PHOTOS: The 4th annual LIC Summit at the Museum of the Moving Image