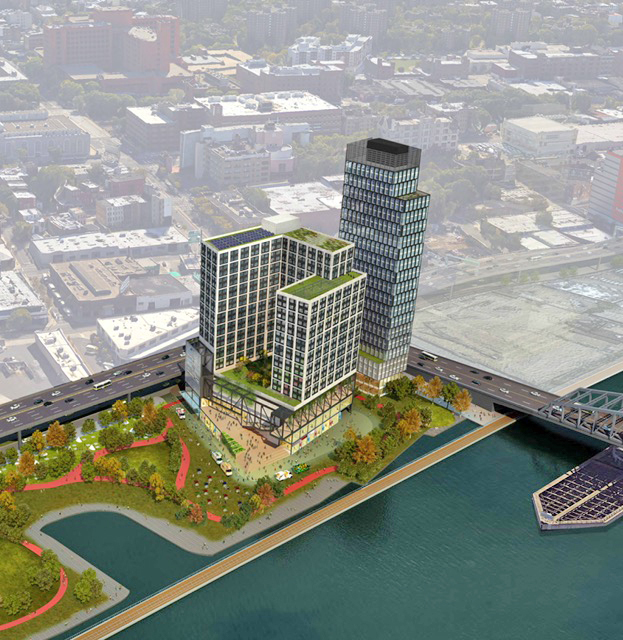 The city has tapped prolific New York builder L&M Development for the new Bronx Point waterfront development that will include 1,045 apartments, an esplanade, outdoor performance space, and The Universal Hip-Hop Museum, the nation’s first brick and mortar hip-hop museum.

L&M will collaborate with Type A Projects and longtime BronxWorks to work with community members on workforce development and open space options for the project.

“From a state-of-the-art multiplex theater and top-notch educational programming, to a locally-driven food hall and the first-ever brick-and-mortar Hip Hop Museum, we believe this will be a project that South Bronx residents will be proud of for years to come.”

James Patchett, president and CEO of the New York EDC said, “Over the last two years, NYCEDC has worked with the South Bronx community to address the area’s most pressing needs: affordable housing and waterfront access. Today, we are excited to announce the activation of this long-vacant waterfront site with high-quality public open space, over 600 units of permanently affordable housing, and a range of cultural facilities that pay homage to the boogie down Bronx.”
Bronx Point is one component of a $194 million capital investment strategy announced by Mayor de Blasio in 2015 and led by NYCEDC to prioritize the area’s needs.

The investment strategy includes the acquisition of land for the creation of a brand new 2.3-acre park on the Harlem River waterfront at East 144th Street, blocks south of the Bronx Point project site; investments in sewers; complete redesign of large high-traffic intersections and significant streetscape improvements along Exterior Street, including new lighting and sidewalks; expansion of high-speed broadband to attract businesses.

These capital projects are now underway and slated for completion in the next few years.

The Bronx Point site is adjacent to Mill Pond Park and the 145th Street Bridge that connects to Upper Manhattan.

The plans include up to 1,045 units of housing to be delivered in two phases. Phase one is anticipated to be completed in 2022 and will include a600 units of permanently affordable housing, a waterfront esplanade, outdoor performance space, public plaza along Exterior Street, multiplex theater, the Hip-Hop Museum, food and beverage hall and incubator that will target Bronx-based small food vendors to help them start their businesses

The project is expected to create over 100 permanent jobs and approximately 915 direct construction jobs in phase one.
The construction will aim to reach the highest standards of environmental sustainability through the Enterprise Green Communities or LEED Gold Certification.

The development team will take part in HireNYC, a NYCEDC program that connects the City’s workforce development services to various projects and will work closely with local partners to connect residents to new jobs in the development.
Additionally, Bronx Point will work to meet or exceed a 35 percent M/WBE participation goal.