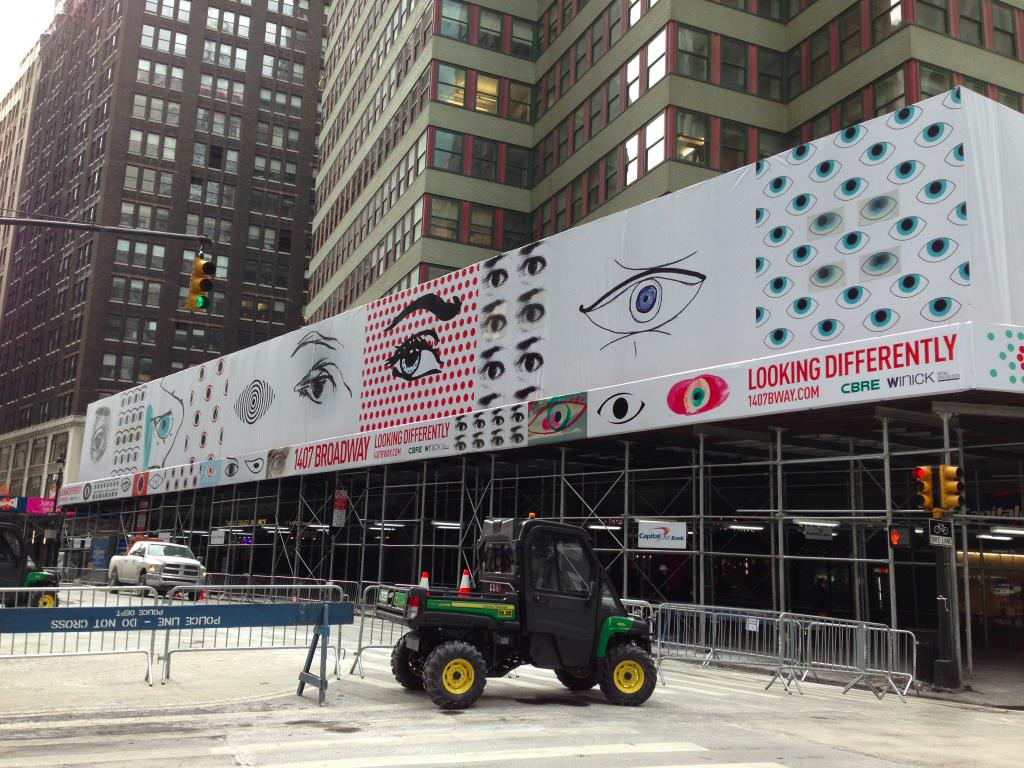 If you have a feeling someone is watching you as you walk along Broadway, it’s not because you’re paranoid.

You’re probably within sight of 1407 Broadway, one of the premier buildings in what was previously the garment hub of New York City.

The iconic 1.1 million-square-foot building, owned by The Lightstone Group in partnership with Lightstone Value Plus REIT, Inc. (LVPR), is undergoing extensive renovations and repositioning, dramatized by a construction bridge installed this week.

The selected design is a monumental graphic, more than 20 feet high, which features a unique collection of illustrated eyes and the tagline “LOOKING DIFFERENTLY.”

The Lightstone Group and LVPR will be redesigning and upgrading the building to reposition it towards the technology, media and creative industries, which are currently experiencing explosive growth and moving north of Chelsea and the Flatiron markets.

The facelift includes new retail fronts and a canopied entry way to enhance the building’s presence along Broadway.

Lightstone’s brand partner on 1407 Broadway, CO OP, was commissioned to design a construction bridge that would illustrate the transformation underway at 1407 in an impactful and differentiating way.

The diverse illustrative styles, such as hand-drawings, collage and computer graphics, demonstrate 1407’s new creative orientation, as well as the diverse personalities of its tenant base that span the tech, media and fashion industries.

The power of the bridge design is that it serves as an announcement that 1407 is not only undergoing exciting physical transformations that will make the building “look different,” but also inspires its viewers to “think differently” about 1407.

The concept of “looking” was further dramatized through the use of lenticulars, which give the illusion that the eyes are following the passers-by, creating further intrigue.

“This approach captures the essence of how we are seeking to reposition 1407 Broadway,” said Mitchell Hochberg, president of The Lightstone Group. “Broadway in Midtown has really transformed into an active office corridor and we think the renovations we have planned will make 1407 Broadway highly attractive to the tech, media and creative businesses that are moving north.”

CBRE Group, Inc. is the exclusive leasing agent for the building. Capital improvements to the building will be overseen by Fogarty Finger Architecture PLLC and will include upgrades to the infrastructure and systems such as HVAC and electrical, along with renovations of the main lobby, floor-by-floor common areas and street level retail storefronts.

Enhanced technology systems such as telecommunications risers, high speed internet, and a transfer system for massive amounts of data will be installed. The 13,000 s/f floor plates of The Tower (floors 23 – 42) and base floors ranging in size from 40,000 to 50,000 s/f will be built out to meet the unique needs of contemporary office tenants.