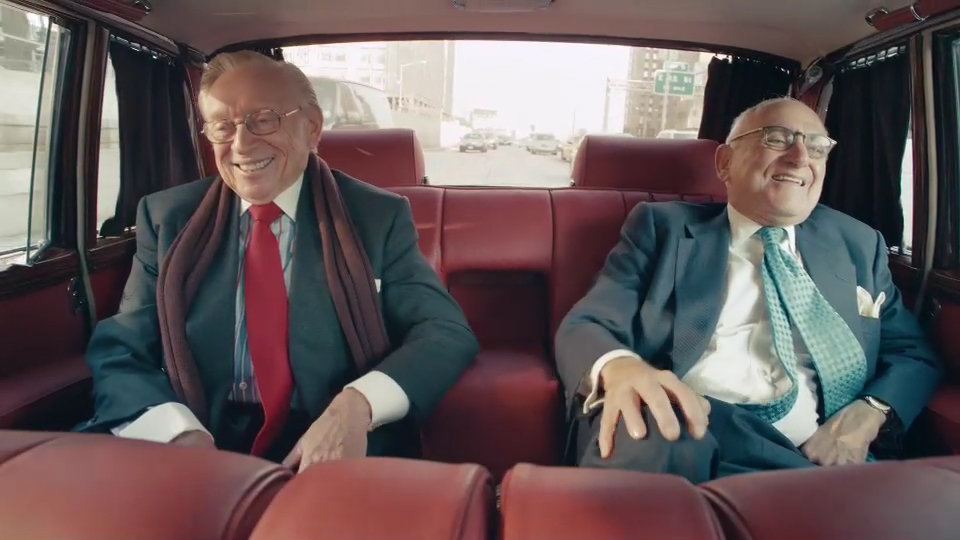 When you watch the promotional movie Larry Silverstein and Robert A.M. Stern shot for 30 Park Place, their first collaboration as builder and architect, you could be forgiven for believing the two stalwart New Yorkers were life-long buddies.

The film — shot in the back of a vintage black Rolls Royce — shows the World Trade Center powerhouse and Yale School of Architecture Dean driving around Manhattan, bantering back and forth about the city they love.

Both grew up in Brooklyn — Stern with working class parents in Kensington, Silverstein in a Jewish family in Bed-Stuy — and both dreamed of great things beyond the borough borders.

Now in their twilight years — Stern is 75 and Silverstein 83 — the two men have each achieved success beyond even their wildest dreams. And their classic new Four Seasons Hotel and Condominium at 30 Park Place shows that neither has any desire to slow down.

At an unveiling of the new sales center for 30 Park Place last week inside the developer’s 7 World Trade Center building, the two men said they were each in sync in their desire to build what they called “one of the finest residential buildings in New York City.ˮ

From the magnificent limestone facade crowned by penthouse terraces and peppered with pristine balconies, to the mazed marble and grand staircase in the lobby, the building is nothing if not a nod to the grand days of old New York.

“I think it’s a superb design,” said Silverstein. “Notwithstanding the fact there are many architects that are available for this type of building, there are few architects who understand luxury like Bob Stern.

“The building is impeccably designed, has the best amenities and service, and is located in the heart of the hottest neighborhood in New York,” added the developer, noting it will be the tallest residential building downtown.

“It’s the kind of skyscraper I dreamed about as a kid,” said Stern. “I think it will be a natural fit. It’s a symbol of the rebirth of Lower Manhattan.”

But things didn’t always look so shiny. Silverstein bought the land for the property back in 2006 and demolished what had been the Moody’s headquarters at 99 Church a year later.

He and Stern’s team worked on the design for the next two years, until the collapse of the financial markets ground work to a halt.

Silverstein said it was a tough call deciding whether or not to continue with the project. “We said, let’s wait. But the clock was ticking in terms of costs.”

Stern admitted that the team had been “rushing” on the project before the crash, with Silverstein eager to see the World Trade Center site redeveloped.

With faith that the market would come back, Silverstein said he decided to “sit back, hold his breath, and wait.ˮ
In the meantime, Stern and his team took a “a fine toothed combˮ to the plans and made several changes that, he said, ultimately made it a much better building.

“We took advantage of that hiatus to get it as good as we could,” said Stern.

When they welcomed the press to the sales center unveiling, Silverstein beamed that, although the office had only officially opened the night before, already half of the units had been sold, a sign, perhaps, that the property was well worth the wait.

Kelly Kennedy Mack, president of Corcoran Sunshine later clarified that while yes, it was half sold at prices hovering around $3,500 p/s/f, her team had been very busy in pre-development sales for the past four months.

Of the 157 apartments that will sit atop the Four Seasons, there will be a collection of one bedrooms priced from $3 million all the way to $29.5 million for a five-bedroom penthouse.

One half-floor penthouse has already sold for $17 million, said Mack, adding that there is still a varied selection of one-to-five bedrooms available and the as-yet-unpriced full-floor penthouses would be released “at a later date.ˮ

The tower sits directly across from the iconic Woolworth building, a tower that Stern used to see as a child coming over the Brooklyn Bridge into Manhattan. Constructing 30 Park Place right next door to the famous building has been a “labor of love,” he said.

When complete, the tower, designed in Stern’s neo-classic style in the vein of 15 Central Park West, one of Stern’s most famous projects, will rise to 82 stories.

Stern said they wanted to make something that belonged to a certain family of buildings. “Larry was up to his ears in glass buildings,” he joked. Incorporating The Four Seasons five-star hotel into the first 40 floors will give the building a whole other level of luxury. Apartment owners — who have their own separate entrance — will have same access to all 40,000 s/f of amenities and features as guests of the hotel, which include a 75-foot pool, as well as a full suite of hotel services, all managed by Four Seasons Hotels and Resorts.

As Silverstein put it: “Residents will be able to get what ever their heart’s desire, 24-hours a day seven days a week from what I consider among the finest purveyors of luxury in the world.”

Paul White, vice president of Residential of The Four Seasons Hotels and Resorts, said 30 Park Place is the group’s first integrated hotel/residences in New York City, following 33 other hotel/residences combos around the world.

“It’s gotten a lot of buzz from people all over the world, including real estate trophy collectors,” said White. “It’s our highest priority, we’re absolutely thrilled about it.”

The 38th floor will be dedicated to residential amenities, including a fitness center, vaulted conservatory, screening room and spa. There will also be a grand ballroom on the lower levels and negotiations are ongoing to bring an accomplished global chef to the street-level restaurant.

Stern, who can see the building rising from his office terrace on 33rd Street (the building is currently built up to the 62nd floor) has no doubt that 30 Park Place will be a tantalizingly upper class New York success. “It will be a landmark of New York,” he said.

Silverstein added that choosing Stern to build 30 Park Place was an easy choice, and the two hope the building will help breathe even more life into Lower Manhattan.

As the two rounded out their discussion with visions of society events and business gatherings in the great ballroom, Stern openly chuckled about the fun he’s had with the projects.

He and Silverstein had only met in passing before the collaboration. “This was our first big date,” quipped the architect. “But we’re like two peas in a pod.

“Who wouldn’t get along with Larry, he’s so nice!”