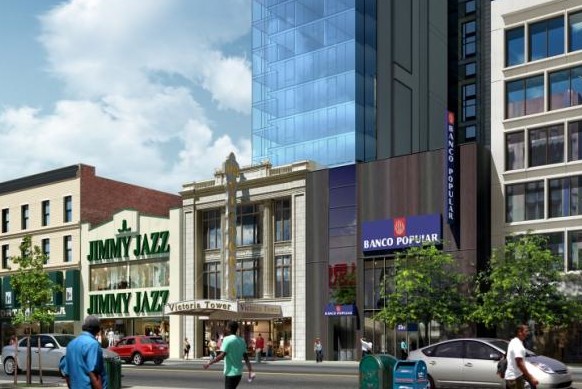 Colliers International and its minority business partner, Madison Square Realty, have been named leasing agents for the retail space at the redeveloped Victoria Theater in Harlem.

Lam Group and Exact Capital broke ground on the West 125th Street project at the beginning of May. It will eventually incorporate a Renaissance Hotel, 229 residential units, and additional cultural/performance space.

Colliers’ Patrick Breslin, Samuel Gatan and Kenny Yip and Madison Square Realty’s Eric Yarbro will act as agents for the retail space, located at 233 West 125th Street, between Frederick Douglass Boulevard and Adam Clayton Powell Jr. Boulevard. Division is possible in blocks ranging from 967  to 24,000 s/f. The space should be ready for occupancy by the second quarter of 2019.

“One Hundred Twenty-fifth Street has always been a multi-dimensional hub for the Harlem community, and the redevelopment of the Victoria Theater both retains an important piece of history and expands the area’s appeal to a even larger audience of residents, office workers, shoppers, tourists and entertainment seekers,” commented Eric Yarbro, founder and CEO of Madison Square Realty.

Breslin, Vice Chairman at Colliers International, added, “The new Victoria Theater complex offers a unique opportunity to lease totally new space in a highly desirable section of the 125th Street Corridor. Savvy retailers can tap into the area’s energy and growth to expand their own success.”

Paul Massey drops out of race for NYC Mayor

YM/WREA gets to the art of trend in lobby design