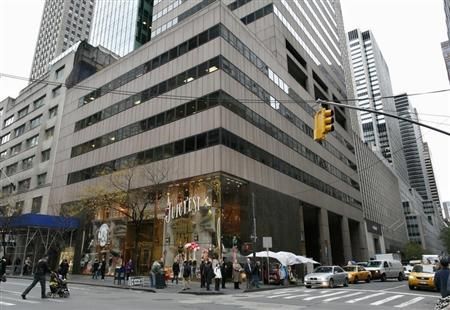 Jury out on tower fate in Iran cash scandal

A Manhattan jury will decide whether the government can seize a majority stake in Midtown skyscraper 650 Fifth Avenue.
The Alavi Foundation, which owns a 60 percent share in the 36-story tower, is accused of being a front for Iran.

Prosecutors alleged that the organization, which was founded by former Iranian leader Shah Mohammad Reza Pahlavi, knowingly partnered with an Iranian bank after economic sanctions were imposed on the country in 1995.

Alavi, which gives loans and grants to religious groups, is also said to have funneled funds to Iran through its charities.
“You’ve seen that secret laid bare,” Assistant US Attorney Michael Lockard told jurors on Monday, according to the Associated Press.

Lockard said that the government has proven its case through witnesses and documents. This included testimony from George Wineriter, an FBI surveillance team member, who served as the lead-off witness in the case, according to AM New York.
Wineriter claims that he saw Farshid Jahedi, who the former president of the Alavi Foundation, destroy documents after receiving a subpoena in 2008.

Wineriter retrieved the evidence after Jahedi dumped the documents at an upstate shopping center parking lot. Jahedi later pleaded guilty to an obstruction of justice charge.

The prosecution argued that Jahedi’s conduct shows that Alavi knowingly violated the sanctions.

John Gleeson, the counsel for Alavi, countered by accusing the prosecution of bias. He claims that the government had prematurely reached its conclusions before collecting information.

“Blend everything together, paint everything, everyone, with the same brush,” Gleeson said.

Prosecutors have been trying to seize Alavi’s stake in the tower since 1998. The case is now in its final stages, with the jury, which starts deliberations as early as today, set to determine whether the government can seize part or all of Alavi’s shares in the tower.

Aside from 650 Fifth Avenue, other Alavi assets may also be seized by the government. This includes properties in Houston, California and Maryland.

If the government wins, it plans to hand over the proceeds from the sale of 650 Fifth Avenue to terrorism victims who have won $5 billion in judgments against Iran. The tower has been valued between $800 million to $1 billion.
SL Green Realty Corp. and Jeff Sutton own a 49-year leasehold interest covering the entire retail portion of 650 Fifth Avenue. They bought out the lease of retailer Juicy Couture in 2013 to accelerate the partnership’s ability to reposition the building’s retail corner location.