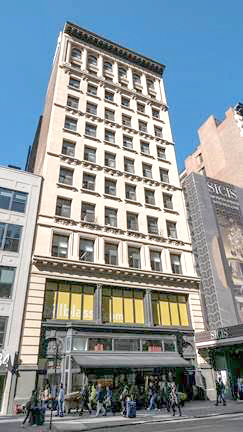 The Kaufman Organization announced that Gear Patrol, a men’s luxury lifestyle magazine and media company, has signed a 7,500-square-foot lease to become the first tenant at Kaufman’s recently acquired 236 Fifth Avenue in the NoMad neighborhood.

The New York-based firm will occupy a space on the eighth floor of the building, which is currently undergoing a capital improvements campaign to transform the property into a first-class office destination.

“236 Fifth Avenue is designed to appeal to tenants that value a workspace that adequately reflects the identity of their brands,” said Grant Greenspan, Principal of Kaufman. “Welcoming Gear Patrol as the first tenant in this upscale office building is clear evidence that the property’s sleek design along with convenient amenities including gourmet kitchens, concierge and doorman services, cater to the tastes of these sophisticated tenants.”

“Kaufman has consistently attracted creative, progressive tenants such as Gear Patrol to its Midtown South properties,” said Jared Sternberg, Associate with Kaufman. “With the launch of leasing at 236 Fifth Avenue, we will continue to build a tenancy that is reflective of the diverse, upscale NoMad neighborhood.”

Asking rent was in the high $70’s-per-square-foot range and the tenant is expected to take occupancy in early fall 2018.

“Gear Patrol was in search of an office that offered both the convenience of access to the city’s media and business communities and also provided a comfortable, inspiring atmosphere for its employees,” said Mr. Albert. “The thoughtfully crafted, prebuilt space at 236 Fifth Avenue is an ideal fit for Gear Patrol’s stylish and modern culture.”

Since acquiring 236 Fifth Avenue in September of 2017, Kaufman has been investing significant capital, operating and marketing expertise to upgrade the property to a best-in-class, state-of-the-art office destination.

Kaufman is completely renovating the lobby, upgrading the elevators and elevating the property’s technical capabilities by installing state-of-the art fiber optic telecommunications risers. The lobby will also be adorned with a wall panel sculpture from artist Fernando Mastrangelo.