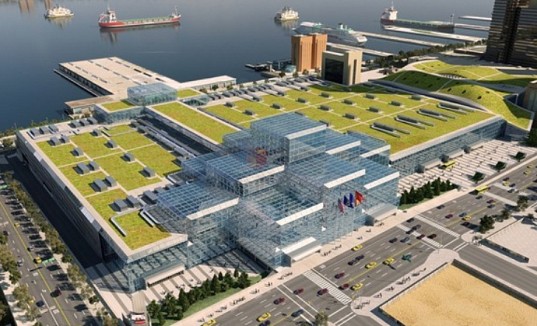 Governor Andrew M. Cuomo announced that the $1.5 billion expansion of the Javits Center will be substantially complete by March 2021.

The massive project, which will add 1.2 million square feet of total event-related space on Manhattan’s West Side, is moving toward an on-time, on-budget completion with the expansion’s steel and concrete superstructure finished and installation of the final phase of non-structural steel underway.

The Governor joined members of the project team and construction workers to sign one of the last steel beams to be installed at the site.

The first event hosted at the newly-expanded convention center will be the joint International Contemporary Furniture Fair and LightFair in May 2021. The combined design-industry events are expected to attract more than 40,000 design professionals to New York City.

“New Yorkers expect action, and the expansion of the Javits Center through the design-build process is delivering results in a safe, streamlined fashion that will generate a new wave of economic activity for the Empire State,” Governor Cuomo said.

“With so many jobs dependent on large-scale events hosted here, the Javits Center has become one of New York’s most important economic assets, and this expansion will ensure it remains the nation’s busiest convention center for generations to come. As an iconic hub of commerce and culture, it will become one of the most sought-after event venues anywhere in the world.”

The expansion project’s steel and concrete superstructure is fully installed, and all concrete and steel work is expected to be finished by March 2020, exactly three years after the project’s groundbreaking.

In total, 13,940 tons of steel have been fabricated. Upon completion, the expanded Javits Center will feature more than 200,000 square feet of new meeting room and pre-function space, including a 54,000 square-foot special event space — the largest event space of its kind in the Northeast.

All of the new exhibition and meeting spaces will be equipped with the latest technology in lighting fixtures, heating and cooling systems and wireless connectivity.

Spearheaded by Governor Cuomo and Empire State Development, the project will create up to 6,000 new jobs, generate nearly $400 million in additional annual economic activity and attract more blockbuster events from around the world.

As part of the expansion project, a four-level truck marshaling facility will be built, relocating more than 20,000 event-related trucks off nearby streets annually while reducing area congestion and pollution.

Building on the success of the convention center’s 6.75-acre green roof, a one-acre rooftop farm, the largest of its kind in Manhattan, will be constructed, and up to 40,000 pounds of produce will be grown annually and incorporated into meals served at the venue.

Upon completion, the project is expected to be certified LEED Silver by the U.S Green Building Council, the same certification as the existing building.

A joint venture of Lendlease and Turner is leading the construction of the expansion project with design services provided by tvsdesign.

At the height of project activity, more than 3,000 construction workers will be working on the construction site at the north end of the campus.