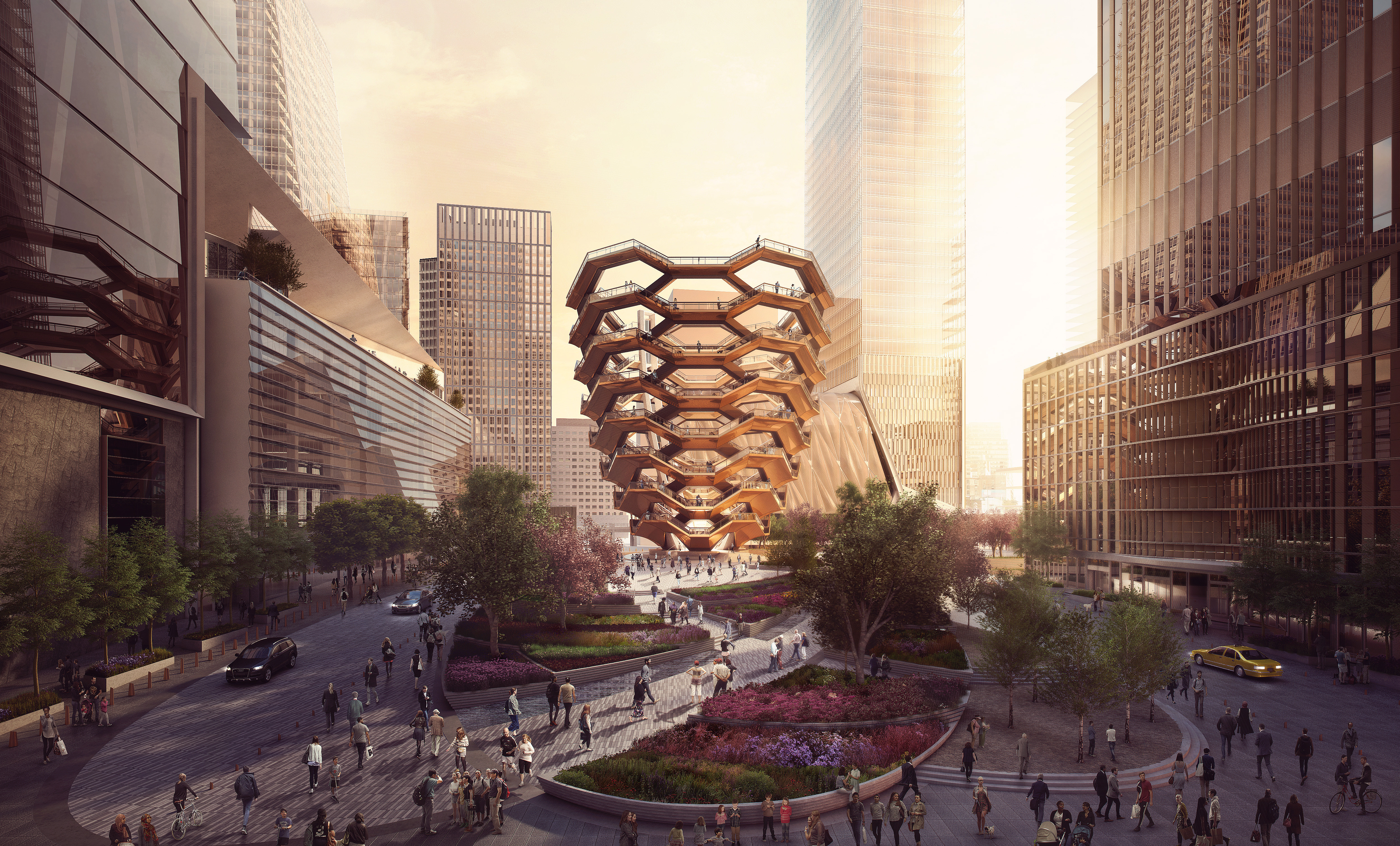 A special performance by the Alvin Ailey Dance Foundation, the internationally recognized dance organization whose West Side home is New York’s largest building dedicated to dance, extended a joyful welcome to Vessel and Public Square and Gardens at Hudson Yards that will soon distinguish the neighborhood.

The Public Square and Gardens at Hudson Yards, designed by Nelson Byrd Woltz Landscape Architects, in collaboration with Heatherwick Studio, will feature more than five acres of public plazas, gardens and groves that seamlessly connect to the High Line and the new Hudson Park & Boulevard.

When complete, this continuous chain of open spaces on the West Side will run from Gansevoort Street to Times Square, making it the largest network of public spaces developed in Manhattan since Central Park

At its center will sit Vessel, designed by Heatherwick Studio. With the development of the second phase of HudsonYards, this new public space will also connect across 30th Street to the final phase of Hudson River Park, extending the bike paths from the George Washington Bridge to the north, south to the Battery.

Vessel is a new kind of public landmark: engaging and interactive, meant to be climbed and explored. Comprised of 154 intricately interconnecting flights of stairs – almost 2,500 individual steps – and 80 landings – Vessel will lift the public up, offering a multitude of ways to engage with and experience New York, Hudson Yards and each other. In total, Vessel will offer a mile’s worth of pathway rising up above the Gardens.

The dramatic design of Vessel creates a stage set for New Yorkers and visitors from around the world: a geometric lattice of intersecting flights of stairs, whose form rises from a base that is 50 feet in diameter and widens at the top to 150 feet. It is constructed of a structural painted steel frame, its underside surfaces covered by a polished copper-colored steel skin.

Thomas Heatherwick, Designer and Founder of Heatherwick Studio, said: “My studio was commissioned to design a centerpiece for an unusual new piece of land in New York. In a city full of eye-catching structures, our first thought was that it shouldn’t just be something to look at. Instead we wanted to make something that everybody could use, touch, relate to. Influenced by images we had seen of Indian stepwells, made from hundreds of flights of stairs going down into the ground, an idea emerged to use flights of stairs as building elements.”

“When I was a student, I fell in love with an old discarded flight of wooden stairs outside a local building site. It caught my imagination and I loved that is was part furniture and part infrastructure. You could climb up stairs, jump on them, dance on them, get tired on them and then plonk yourself down on them. Years later, suddenly here was an opportunity to make a new kind of landmark for Hudson Yards. We wondered whether it could be built entirely from steps and landings? The goal became to lift people up to be more visible and to enjoy new views and perspectives of each other. The idea is that it will act as a new free stage set for the city and form a new public gathering place for New Yorkers and visitors.”

The unveiling culminated in a dramatic and energetic live performance by dancers from Alvin Ailey, including both youth and adult students, under the direction of Matthew Rushing, inspired by the design of the public space and Vessel and its aspirations. The performance and an accompanying short film, that featured company dancers as well as students from Alvin Ailey, captured the energy, creativity and rhythm of the City and its people, as well as the draw and experiential and interactive nature of Vessel.

Stephen M. Ross, Chairman of Related Companies, said: “Our neighborhoods here in New York and in great cities around the world are defined by their public spaces – and the Public Square and Gardens at Hudson Yards and its magical centerpiece by Thomas Heatherwick and Heatherwick Studio will become a new icon not just for the neighborhood, but for the city.

The expansive gardens and groves will offer respite and Heatherwick’s imaginative Vessel will allow the city and its visitors to engage with each other and their surroundings in new ways. Like New Yorkers, Vessel is not passive. It embodies our city’s energy, activity and movement. Only Thomas could have imagined such an active, engaging, innovative and beautiful structure to welcome everyone to Hudson Yards, and we are extremely proud to share his vision with the city. It is an unprecedented piece both in its monumental scale and experience and as it weaves its way into the life and identity of the city, we want the public to not only experience and experiment with it, but eventually determine its name.”

Mayor Bill de Blasio said: “This incredible open space will define this neighborhood. And at its center, this new landmark will become an engaging destination that brings New Yorkers and visitors together. We thank Stephen Ross for his dedication to our city’s public realm. We are thrilled to see Hudson Yards taking shape, and the investments in housing, jobs, transit and public space bearing fruit.”

The landscape design by Nelson Byrd Woltz for the Public Square and Gardens, inspired by Manhattan’s rich ecological history of dense forest crossed by streams from the Hudson Highlands to the early industrial history of the 19th and 20th Century, will feature groves of trees, woodlands plants, perennial gardens and a 200-foot-long fountain that will mirror the flow of a river. Visitors entering from the north will be greeted by a seasonally expressive Entry Garden, while the southern edge will offer a dense canopy of native trees including Nyssa sylvatica, commonly known as black tupelo, or blackgum, in a Pavilion Grove, creating the perfect place for lunchtime gatherings or evening meals. At the Public Square at Tenth Avenue and 30th Street, visitors will find the fountain, a birch grove and a new entrance to the High Line.

An immersive and varied horticultural experience is planned across the whole site, with more than 28,000 plant species of varying color and texture, including more than 200 mature trees. The large trees, expansive native perennial gardens and patches of wildflowers will be home to migratory birds and pollinators. Throughout the Public Square and Gardens at HudsonYards, pedestrian paths will be lined with seating walls and delineated by varying shades of gray granite bands of hand-laid cobble stones.

Beyond hardscape and planting design, the landscape platform itself is a technical innovation. Serving as a ventilating cover over the working rail yards below, the platform is engineered to support large-scale plantings and serve as a reservoir for site storm-water management and reuse. The space will feature nearly a mile of low garden walls, with nearly 80 percent designed for sitting and respite. Additional seating will be made available throughout Hudson Yards in a wide-variety, allowing for a full-range of experience.