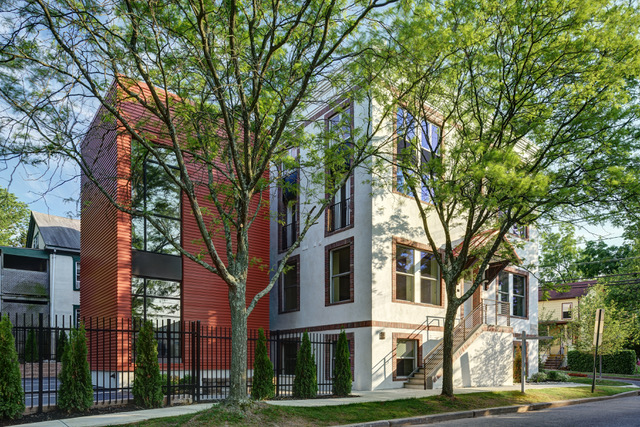 A historic meeting hall for African American Masons has been transformed into an apartment building in Princeton, NJ.

Originally built in 1924, the property housed the temple and meeting house of Aaron Lodge No. 9 Masonic, a African American branch of the Freemasons, the secret society of men that dates back to the 14th century.

The property was acquired by local developer Princeton Maclean LLC and, following a two-year process of public hearings and community consultation, JZA+D obtained approval to transform the 7,600 s/f structure into housing, with the objective of commemorating its authentic character.

Rising four stories, 30 Maclean was reimagined inside and out to preserve its storied legacy while introducing best practices in green building. It features ten studio, one-bedroom and two-bedroom units with contemporary materials and finishes. The stucco and brick exterior façade has been restored to maintain its historic appearance and charm.

“Our goal was to introduce much-needed new residential units,” said JZA+D’s managing partner Joshua Zinder, “including two earmarked for affordable income housing, while also preserving a locally iconic building, in a way that venerates the classic distinction of this historic neighborhood.

“At the same time, we wanted to act responsibly and make 30 Maclean a sustainable experience for residents and neighbors.”

Deemed essential by state guidelines, construction continued at a reduced pace in recent months, as strict social distancing guidelines were enforced on the job site to minimize contact and possible transmission.

“Restoring a historic property of this nature is an elaborate task. Our goal was to bring new life and use to Aaron Lodge No. 9 as quickly as possible, while ensuring optimally safe working conditions during the construction process, given the unprecedented circumstances,” said Zinder.

Freemasonry became popular with African American men during the American Revolution based on its founding principals of liberty, equality and peace. However, white members often used the masons inherent secrecy to vote against black members joining and they ultimately began to form their own lodges.