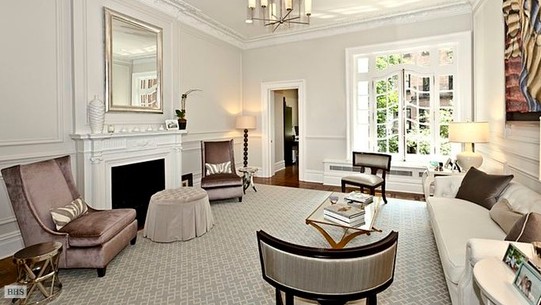 IT appears that media heiress Gillian Hearst-Shaw and her husband have just bought a $10 million Upper West Side townhouse.
City records indicate Shaw, who is married to lawyer Christian Simonds, signed the trust documents for the three-story house on West 83rd Street.
Gillian is the great granddaugher of media mogul William Randolph Hearst. Her mom is
Patricia Hearst, the heiress kidnapped by the Symbionese Liberation Army (SLA) in 1974 when she was just 19 years old.
Patty was famously brainwashed during her captivity and denounced her former life to become an SLA guerrilla, carrying out a bank robbery during her time with the group.

She served two years in jail before being pardoned by then president Bill Clinton.
Gillian (35) and her husband have one child and she works as society editor at the Hearst Corporationʼs Town & Country magazine.
The townhouse listed by Brown Harris Stevens agents Nancy Candib and Kristin Clark and next door to the Museum of Natural History – was sold by financier Thomas Wei.

Politican pundit Keith Olbermann sold his Trump Palace condo last week.
No fan of presidential campaigner Donald Trump — who developed the 54-story luxury tower in 1991 — Olbermann heralded the sale on his Twitter account. “I got out with 90% of my money and 100% percent of my soul,” he tweeted.
Compass agents Wendy Jodel and Ginger Shukrun had listed the three bedroom, 2.5-bath apartment at $3.9 million in April.
Their listing notes it is “wrapped in windowsˮ has a “massiveˮ living room, dining room, two terraces and a balcony.
The brokers had no comment on the sale.
In a March column for the Washington Post, Olbermann explained why he was getting out , writing: “I’m getting out because of the degree to which the very name “Trump” has degraded the public discourse and the nation itself.
“I can’t hear, or see, or say that name any longer without spitting.ˮ