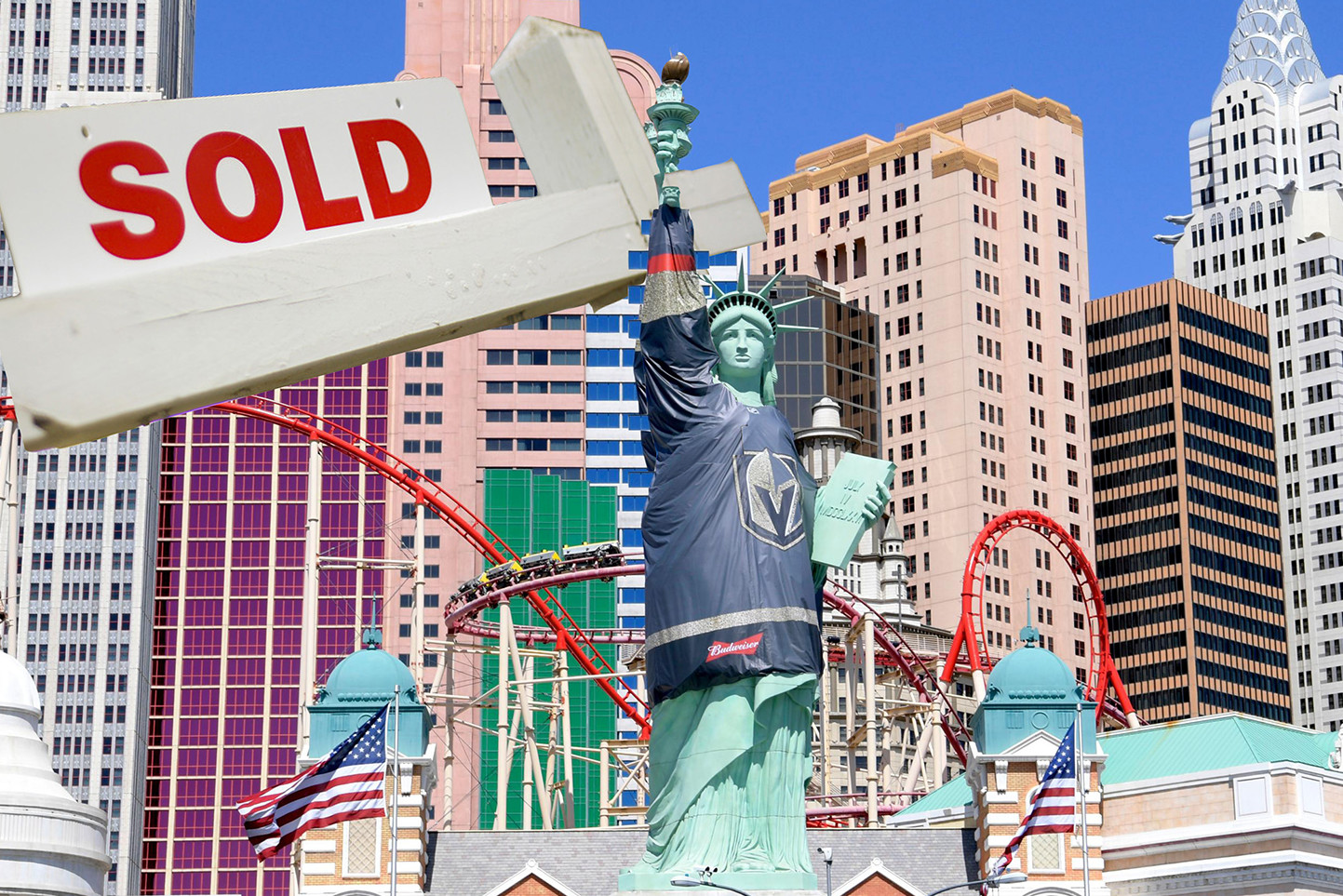 Descending into McCarran International Airport, New York’s real estate delegation will be welcomed by a familiar sight as it arrives in Las Vegas for RECon 2018 this weekend: Lady Liberty standing poised with torch held high.

However, this year, the replica statue stationed in front the New York-New York hotel will sport a slightly different look. A black and gold hockey jersey will cover her billowing robes in honor of the city’s newest attraction, the Las Vegas Golden Knights, as the team clashes with the Winnipeg Jets for a spot in the NHL’s Stanley Cup Finals.

A deep playoff run by a major league team is enough to energize any metropolis but for the Las Vegas Valley, an area with more than two million residents, it means just a little bit more. It’s validation that, beyond the forged landmarks and glittery façades, is an authentic American city.

“The team has given the city a unique thread that connects people here together,” Kerry Bubolz, president of the Golden Knights, said. “Some people have used more powerful words like it gives the city a soul that it lacked before.”

While the impact of professional sports is often overstated and overblown, in Las Vegas, a town where the majority of the population was born elsewhere and few have deep roots, the upstart hockey team has given residents a common bond. This unification arrives as the young desert city blossoms into a mature market.

“Being held in that regard is a tremendous honor, but it’s also an additional level of responsibility because we’re given the platform to show that Las Vegas isn’t just the Strip,” Bubolz said. “There are homes here and shopping malls and churches and people who live here and so many people don’t know that, they know the airport, the strip and the area between and that’s it. But it’s not just the 150,000 hotel rooms and all the great entertainment on the strip, it’s a real city made of up real families.”

Hit hard by the Great Recession, Las Vegas is just now reaching pre-2007 peaks of employment and home values. Thanks to the area’s abundance of land, single-family homes still reign supreme. However, builders who got burned when the housing bubble burst are now keeping new product supply in line with present demand. At the same time, pockets of multifamily developments are sprouting up in mixed-use neighborhoods and high-end condo projects are targeting record sales figures.

Sprawling 600 square miles in southern Nevada, the Las Vegas Valley is comprised of Las Vegas, North Las Vegas and Henderson, as well as a collection of unincorporated areas in Clark County. In good traffic, it’s a half hour drive from end to end.

The area’s population has been in a constant boom since the 1990s, increasing from less than 750,000 to roughly 2.2 million. It was the fastest growing metropolitan area in the country 21 out of 22 years and it continues to see an influx of people annually, almost a third of whom are retirees seeking warm weather and a low cost of living. By 2025, the population is expected to hit 2.8 million.

“My guess is that prediction is going to end up being low,” Taylor Sims, director of Cushman & Wakefield’s Las Vegas multifamily team, said. “I don’t think they’re taking into consideration all the immeasurable.”

However, that rapid growth was not without a few stretch marks. In 2005, some 36,000 new homes were built in the area in anticipation of steady job and population growth. The following year, another 38,000 houses hit the market.

Construction ground to a complete halt for the better part of a decade, not only in the housing market, but also in the commercial sector, leaving the skyline dotted with half-built towers and paralyzed cranes.

The city has since diversified its economy, bulking up its medical industry and becoming a hub for e-commerce thanks to its central location in the Southwest. Nevada’s favorable tax system—it has no personal income, corporate, franchise, payroll or estate taxes—has also won over technology and advanced manufacturing companies. “We’re back at our jobs peak but with 50,000 fewer construction jobs, so we’re much more diversified,” Ballif said. “Our future looks very good, especially when we can keep that housing market in check.”

Several mixed-use communities are taking shape, including The District in Henderson, a city located in the southeast corner of the valley, and Downtown Summerlin, a 400-acre community west of the Strip owned by the Howard Hughes Corporation and consisting of retail, apartments, a casino and the Golden Knights practice facility, where the fans turn out in droves to watch the team warm up.

Fore Property Company recently wrapped up Lotus, a 300-unit high-end rental building just off the Strip in Chinatown district and the Calida Group has more than 1,300 multifamily units in the works throughout the valley.

Luxury condos are going up in the Southwest Valley and Henderson, but Dan Palmeri, senior director of Cushman & Wakefield’s Las Vegas tenant advisory team, said the cream of the crop is The Summit, a golf resort community in Summerlin that will feature standalone homes, condos and luxury rentals. A development by Discovery Land Company in partnership with Howard Hughes, the 550-acre-project will have 253 homes and an 18-hole golf course designed by Tom Fazio. Prices range from $2.5 million for a clubhouse suite to more than $10 million for a custom home overlooking the golf course.

“People are paying millions of dollars just for dirt, which is unheard of in Vegas,” Palmeri said. “There used to be very few homes over $5 million and now you’re starting to see those numbers creep up.”

Valley residents typically shy away from the casino-laden city center, opting for local hangouts or making use of the area’s various natural attractions, hiking Red Rock Canyon or boating on Lake Mead. However, the Golden Knights have given them a reason to come to the Strip, not only to attend games at T-Mobile Arena, but also to interact with other fans.

Bar and restaurants on The Park, an outdoor dining and shopping area near the arena, are often packed on game days. Cornhole and other tailgating games are common occurrences. Even away from the Strip, bars throughout the city have hosted well-attended watch parties. The city has also added a WNBA franchise, a minor league soccer team and, once a new stadium is complete, the Oakland Raiders will move to Sin City, too.

“On football Sundays, every bar roots for a different team because everyone is from somewhere else, if you’re from Buffalo you want to watch the Bills play with other Bills fans,” Palmeri said. “We never had our own pro team for people to come together and root for. It’s the one thing we were really missing, because you don’t really have a community until you have something in common.”

Las Vegas was founded in 1905, but large-scale development didn’t start until the late 60s and early 70s. As such, it’s only just starting to cultivate its own identity. Dave Pascual, a 14-year veteran of the Vegas craft brewing scene, has witnessed this evolution first hand.

Pascual, head brewer at Big Dog’s Brewing Company on the city’s up-and-coming northwest side, said in 2004, most beer drinkers in Vegas didn’t know what an IPA was and there was little interest in local ale. In recent years, however, that has changed. In 2015, the brewery hit an all-time high in barrels produced and this year it’s on track to double that amount, with residents and visitors alike wanting to know what exactly a Las Vegas beer tastes like.

“Vegas has been predicated on replicating things from other places, you can see that in all our casinos,” Pascual said. “But in the last few years, people here have started to realize the value in things that are made locally and really embracing everything Vegas. It’s really cool.”