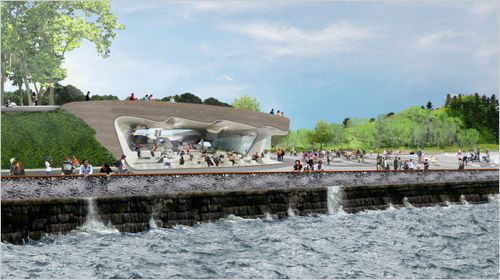 Governors Island projects in full bloom in time for summer

Slowly and steadily, redevelopment continues at Governors Island, which will be open to the public seven days a week for the first time this summer.

Visitors will be greeted with new park space, fresh running water and a $2 fee on the previously free ferry service.

The Trust for Governor’s Island will unveil 30 acres of new park space this May. The new Hammock Grove offers 1,500 trees, 50 hammocks and a view of the Statue of Liberty in New York Harbor.

There are also two new ball fields for Little League and adult softball, and a six-acre public plaza at Liggett Terrace in the center of the island. Infrastructure work has also been completed on some of the island’s historic buildings, which in total house 1.4 million s/f of indoor space. The Trust will open up 200,000 s/f for public programs, such as art shows and other events, this summer. Food vendors can apply for one-weekend or season-long permits to operate on the island.

In December of 2012, the trust put out an RFP for long-term uses of the island’s indoor space. The winners were two current tenants — the Urban Assembly New York Harbor School and Lower Manhattan Cultural Council’s Art Center at Governors Island — which will expand their presence on the island.

The third winner was an Italian spa operator, QC Terme, which plans to operate a year-round public day spa.

The Trust will issue future RFPs for development “at appropriate intervals, depending on market conditions and potential interest and suitability of concepts for the island,” according to the group’s website.

The park space on this island was designed by West 8, a Dutch firm, with project management services provided by Faithful+Gould.

One distinctive public space, The Hills, is still under construction “with the goal of completion in 2015,” according to the Trust website.

The hills, made of recycled construction and fill materials, will rise 25 to 80 feet above the island, with the tallest summit offering a 360-degree view. Other hills will have their own distinctive features, including Slide Hill, which judging from renderings will be exactly the kindergarteners’ dream that the name implies. Governors Island’s public season opens on May 24 and will run seven days a week until the end of September.

Barclays Center to get a green roof