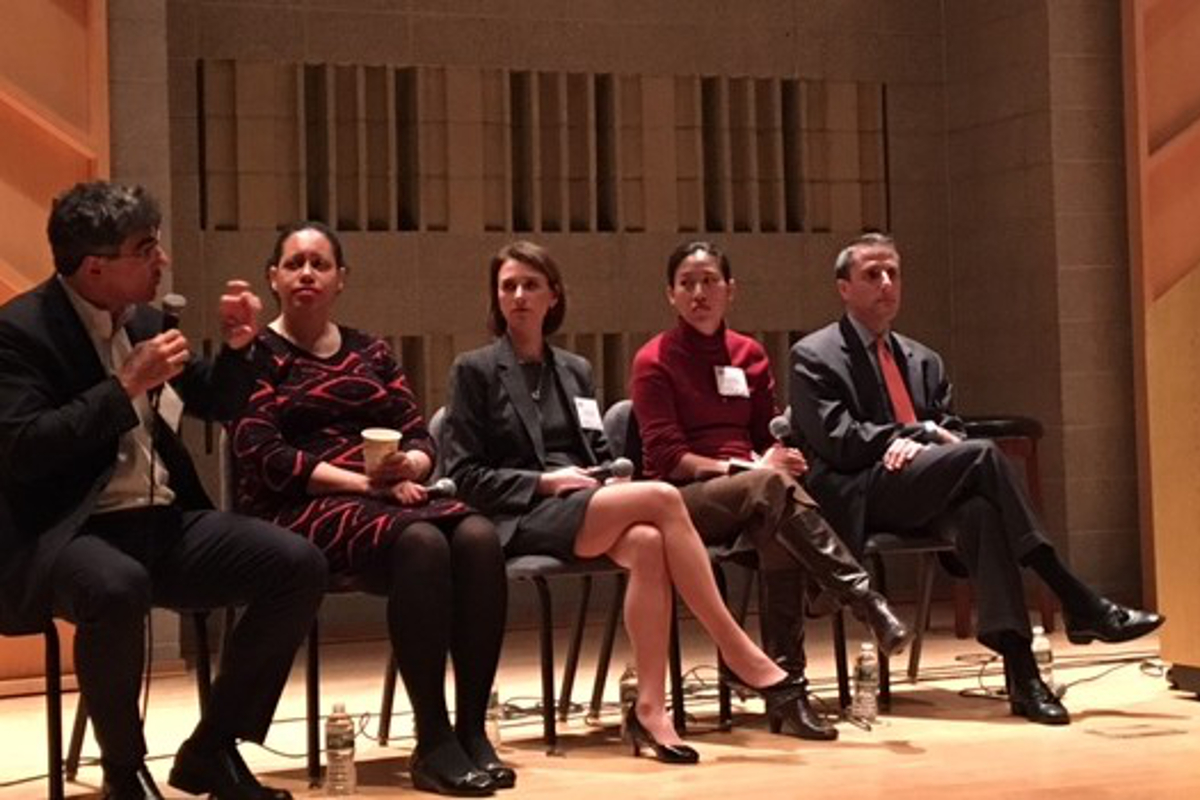 From zoning to bike lanes, government is around every corner of a real estate deal. In his latest Roundtable Discussion, investment sales expert James Nelson, a vice chairman with Cushman & Wakefield, sits down with David Dishy, partner at L+M Development Partners, Jessica Lappin, president of The Downtown Alliance, Angela Pinsky, executive director of Association for a Better New York, Jessica Walker, president of the Manhattan Chamber of Commerce, and Seth Pinsky, executive vice president and investment manager of the RXR Metropolitan Emerging Market Strategy to discuss the government’s impact on New York City real estate.

James Nelson: How do your organizations interact with government?
David Dishy: It is a constant dialogue with the public sector. Depending on the nature of the project conversation, the implications of federal and state and other larger policy issues can have a dramatic effect on the business. Addressing the micro political issues of the individual projects you are working on is essentially the essence of what we do every day.

James Nelson: How much funding comes from the city, the state, the fed for Section 8 housing? How much interaction do you have each of those offices?
David Dishy: In affordable housing, composing the capital stack is the primary challenge (and source of brain damage.) In a pure and traditional real estate deal, capitalization can be fairly straightforward, while on the affordable housing side it is often the complete opposite. The complexity rests in possibly having nine or ten capital sources for fairly modest size projects. These might include new market tax credits, low income housing tax credits, or multiple levels of federal, state and city subsidy, and so you have interactions with these sources and potential partners constantly.
Jessica Lappin: Having good relationships with elected officials at all levels and the various agencies you have to deal with is more important than ever. Community boards have been incredibly empowered and that changes the dynamic as well. A big portion of my job is spent advocating for, lobbying for the neighborhood and interacting with city agencies and those elected offices. For example, the Downtown Alliance maintains many of the public parks in Lower Manhattan and the public plazas that the DOT has created, which means we are dealing with the parks department regularly. Because of the breadth of services we provide, we also work on a constant basis with the transportation department, the police department, city planning, homeless services, and others.

James Nelson: What are the sequences of events for proposals put forward?
Jessica Lappin: It can happen differently. It is unusual for an elected official, particularly when it is an institutional development, to take a very proactive stand. For example, look at what happened when NYU and Columbia wanted to expand. These are major institutions in our city that generate jobs and are really important for us, and the local elected officials were largely opposed to these expansion initiatives. It is important to remember that when you are speaking to people in the government, they are not all experts. Elected officials are sort of generalists by nature.
Angela Pinsky: Some administrations and legislatures like to have an open table and they seek peoples’ opinions, and other people like to propose things and then have people react to it. For us, it is to our strategic advantage to assume this is the way it is and figure out how to best insert ourselves into the conversation. Government and the private sector often talk in two different languages, and they have different ways of approaching a problem, and sometimes that is part of the problem of why things do not move forward.
Seth Pinsky: Development is inherently a public/private partnership. I find it entertaining and sometimes frustrating when I see government try to do development without consulting with the private sector to gain an understanding of its needs. Similarly, I think the private sector does itself a disservice when it proposes projects without understanding the political and other challenges of government. Economic development, and development in general, function best when government and the private sector are closely aligned.

James Nelson: There was a recent comment in the New York Post that New York is not business friendly. How would you respond to that?
Jessica Walker: It is all about the value proposition. New York City costs more to be here, it is very competitive, it is very complex. We pay higher taxes across the board, but at the end of the day, we also have some of the top talent. I think that we are trying to make sure that the value proposition means in favor of the city.
Seth Pinsky: New York is a complicated, difficult and expensive place in which to operate, and yet we have at this point an all‑time high in the number of jobs in the city. Companies from all over the world are coming here, and our problem is not that we have too few businesses coming here; our problem is that we have too many businesses coming here, which is driving up the cost of real estate as our supply fails to keep pace with surging demand. The key for us to continue to be an economic powerhouse is to make the city a place where talented people want to be, because all of these businesses are coming here in spite of our challenges to take advantage of our world-leading workforce. To do this, we must keep the quality of life here high, investing in things like cultural institutions and parks and schools and all of the other things that make living in the city desirable. It also means that we have to make sure that we have enough housing so that people have affordable places in which to live.

James Nelson: Is it possible to develop affordable middle income housing today without the 421a tax abatement? If you can, where do we put them and how do we go about that discussion?
David Dishy: The vast majority of affordable housing that gets produced, is actually not done through 421a. I think 421a is an incredibly important program for a lot of reasons and it is important to figure out a solution to unleashing this potential. It is more important again in terms of rental versus condo and the production of new rental stock throughout the city.
Angela Pinsky: There is a finite amount of land that a number of different uses are all fighting for, and the only way to produce land in New York is to build density.  So the question is, can we have more of a global conversation about what do we need and where does density need to go to adequately increase supply to meet demand? There is an incredible disincentive for a project to have to go through a rezoning/ulurp; it is very expensive, very political, very complex process.  In the end, if property owners believe you might not get to any deal, it may put a big pause on development which could be a big problem.
Seth Pinsky: Our problem is that too many people, too many companies, too many visitors want to come to New York and that our supply is not keeping pace with that demand. The only way that we are going to keep New York affordable for all uses is if we build more housing, more commercial space, more industrial space, more retail.
You cannot be in favor of affordability or diversity if you are not in favor of development. We should also be thinking about this more regionally. If we could develop suburban downtowns at transit nodes, with land that costs a fraction of the land in New York City, we could spread the population over a larger area and make everything more affordable.

James Nelson: What does the government need to do to push forward infrastructure, specifically transportation issues?
Seth Pinsky: The Long Island Rail Road and Metro North are viewed as a suburban issue, and the subways are viewed as a City issue. In fact, we are one interlinked region, so the first thing that we need to do is to view all of these transportation systems as critical to the health of every part of the region. Additionally, there are lots of suburban areas like Yonkers, New Rochelle, or Mount Vernon in Westchester and Hempstead on the Island where the commute is the same or shorter than the commute within the city into places like Midtown, and yet where there has, in recent decades, been relatively little development. If we invest in places like this, we could create affordable housing options that are also convenient to everything that the City has to offer.
To exploit this opportunity fully, though, we have to make sure that we have sufficient revenues for the upkeep and expansion of our transportation network. This requires us to think both about new sources of revenue and about how to make that revenue go farther by bringing down the unit cost of infrastructure construction in the region.
Jessica Lappin: We do have a lot of public transport projects going on right now. Transportation projects originating from the state and the state authority include La Guardia airport revitalization, the East Side Access, the 2nd Avenue subway, and two new Metro North stations going up in the Bronx. It does not feel like a comprehensive transportation overhaul, even though we are spending a tremendous amount of money because it is a bunch of individual projects.
David Dishy: On the non‑rail side, I think biking infrastructure is actually really important. We live in a world right now where talent is very fluid.
To compete, you want to create an environment that sends a message to this talent pool and to entrepreneurs in general that New York is a forward looking, green City that shares your values and that cares about quality of life. Encouraging and supporting biking can be a really cost-effective way to enhance transportation infrastructure ‑ and to create a competitive and successful city.

REW TV asks ICSC: What do you expect from retail real estate in 2017?