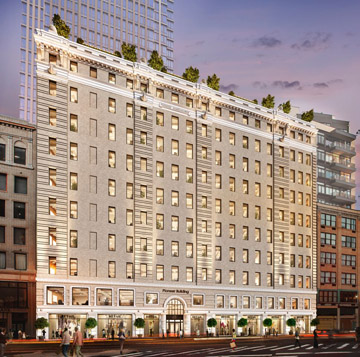 Quinlan and BLT jointly purchased the 270,000 s/f, 10-story office at 41 Flatbush Avenue in late 2015 and are completing a $30 million capital improvement program, converting the former warehouses to office use.

Amenities include a bike facility, landscaped rooftop terrace, a new lobby with artwork and modern furnishings crafted by Brooklyn artists. Architects Beyer Blinder Belle are behind the building’s transformation.

“We first acquired The Pioneer Building because we saw the tremendous opportunity for office space in Downton Brooklyn,” said Tim Quinlan, managing principal of Quinlan.

“This transaction confirms the appeal of the market for high profile tenants who are also recognizing the value in the convenience of nearby, multiple transportation options as well as the many amenities in the neighborhood.”

Gimlet Media was represented by Colliers International brokers Vice Chairman Robert Tunis and Executive Managing Director Eric Ferriello. The company relocated from 92 Third Street to accommodate its expansion and believes its offices at the Pioneer Building will be a recruiting tool to attract top talent.