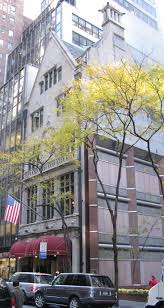 The restoration follows a water pipe rupture that occurred on a day that the club was closed in observance of Martin Luther King, Jr. Day.

FDNY firefighters responded that day, quickly halting the flow of water and protecting the building from more serious damage.

The five-story mansion, known as “The Jerry Lewis Monastery,” has been the Friars’ home since 1957 and is located at 57 East 55th Street. In 2004, the City of New York officially named East 55th Street, “Friars Way.” New York Design Architects, is based in TriBeCa and known for designing the clubhouses for both the New York Mets and the New York Yankees, as well as projects for clients including Alfa Romeo, the Four Seasons Hotel, Jet Blue and the Waldorf Astoria.

HRBD, the general contractor selected to perform the restoration work, has a client roster that includes the Standard Grill and W Hotel in New York.

Since its founding in 1904, the Friars Club has served as the New York home for legions of the greatest American entertainment, sports, civic and business luminaries — and counts among its current members such celebrities as Jimmy Fallon, Sarah Silverman, Jack Black, Robert De Niro, Carole Burnett, Bill Murray and Billy Crystal.

While damage from the January 20 pipe burst was contained to the rear of the building, to expedite the restoration and minimize interference with the contractors, the Monastery was temporarily closed for activities. Starting in the second half of March, the Friars had planned to to begin reopening facilities for members, but those plans are on hold due to state-mandated restrictions on crowds as a result of coronavirus.

“We take very seriously our responsibility as stewards of this magnificent historic architectural treasure in the center of the greatest city in the world,” said Friars Club vice president and broadcast journalist Marvin Scott.

“That is why the Friars Club has engaged with well-known construction and design industry partners to carry out this crucial restoration work, which will allow us to reopen the clubhouse even better than before.”

The Monastery was designed by Alfredo S.G. Taylor, of architectural firm Taylor & Levi, in 1908 as a residence for wealthy art collector and investment banker Martin Erdman of Speyer & Company, a member of the New York Stock Exchange’s governing committee.

He purchased the property after retiring from the financial business and filled the mansion with his extensive art and antique collections.

Following Erdman’s death, the American Institute of Physics converted the mansion to its headquarters. Albert Einstein and J. Robert Oppenheimer, members of AIP, were in the building during the early phases of the Manhattan Project, which developed the atomic bomb. Since 1957 the Friars Club have owned and occupied the building.