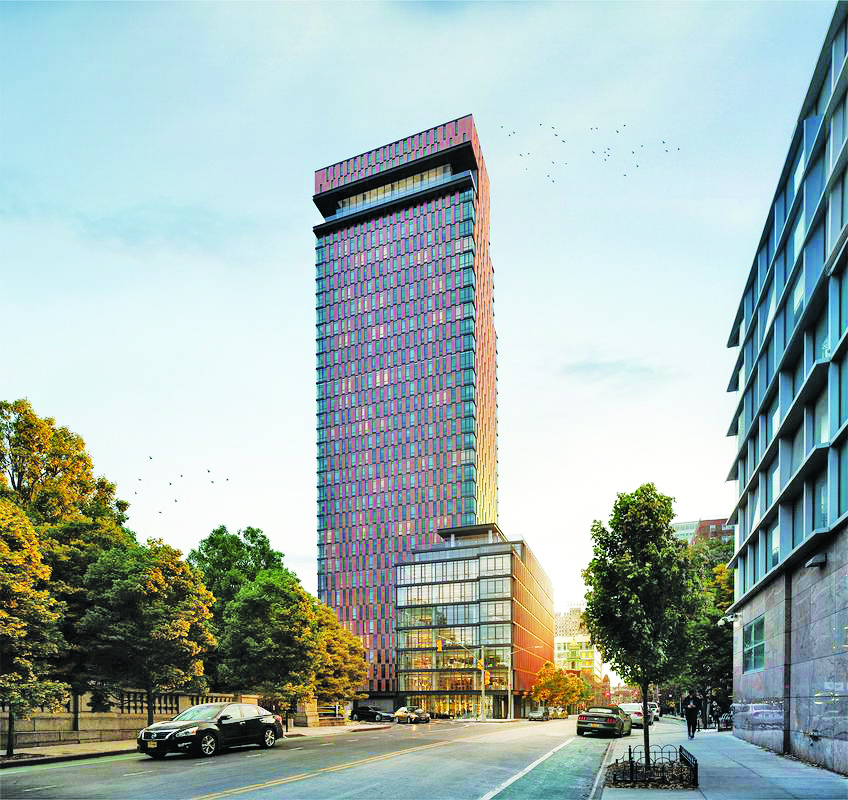 Anyone with a cursory history of Downtown Brooklyn knows that life in the formerly commercial section of the borough has changed drastically throughout the last decade.

The Manhattan-adjacent neighborhood is now speckled with a growing number of new shops, restaurants, entertainment and, of course, luxury residential buildings — none of which capture the eye, and skyline, quite as much as The Amberly, located at 120 Nassau Street.

The new tower, a fledgling mixed-use highrise taller than any other in the neighborhood, is being billed as “a new look for Brooklyn,” that “draws on the historic Brownstones” for which the borough is famous.

And given that the luxury upstart is the first North American tower designed by global architecture firm Woods Bagot, the claim that The Amberly provides a new look is one that takes on a literal meaning.

“The Amberly is one of the first luxury rental buildings positioned at the heart of Dumbo, Downtown Brooklyn, and Brooklyn Heights,” said Jodi Stasse, executive vice president of New Developments at CitiHabitats who is marketing the building.

“The building’s attention to detail both inside and out, condo-sized apartments and finishes, curated amenity offering and panoramic views of the city skyline offer a truly unique offering.”

Apartments in the Amberly — named for its amber-colored facade and not for its developers, AmTrust Corp — include a mix of studios, one- two- and three bedrooms and every apartment features nine-foot ceilings and floor-to-ceiling windows, with custom shades, and in-unit washer and dryers. Prices range from $2,100 to $8,000 per month.

According to building literature, some residences also feature their own private terraces. While most of the building is currently open for leasing, the top floors with terraced apartment will begin leasing in the Spring.

Like most other luxury buildings, The Amberly offers a suite of amenities for residents that include a fitness center with new Peloton brand bikes, on-site valet parking with direct street access, bike storage and a 24-hour lobby.

What separates the building’s offerings from the rest of its kind, however, is a panoramic communal sky-lounge on the 33rd floor named “The Overlook” — currently under construction — that gives residents sweeping views of the Manhattan Skyline, South Brooklyn and the New York Harbor.

Once complete, the lounge will also feature an outdoor deck, a communal kitchen, and like the rest of the building, will allow for internet connectivity for residents who might look to utilize the space for work. The Overlook is slated to open in March.

On the ninth-floor, a separate lounge will also include a wrap-around sun-deck, billiards and communal kitchen.

For the Amberly, while the hyper-curated interior does the majority of the talking, the facade starts the conversation for residents and passers-by. A plaza designed by Scape Architects on the ground floor aims to create a public meeting space that not only fits the Amberly’s aesthetic, but reshapes the surrounding block for “a sense of place, community and identity.”

For residents of the neighborhood, that sense of community includes more than ever before.  Within reach of tenants at The Amberly are a host of neighborhood points of interest like Fort Greene Park, The Brooklyn Museum, the Brooklyn Public Library and Brooklyn Bridge Park.

On top of the ample green space and cultural bastions, the neighborhood also boasts more nightlife options than ever before, including popular Brooklyn eateries like Bar Tabac, June, and Vinegar Hill House.

Elsewhere in the neighborhood redevelopment has taken hold, helping to sprout high-end retail as well as office buildings like Tishman Speyer’s, The Wheeler, a 620,000 s/f “creative office hub” on Fulton Street.

According to representatives for The Amberly, for those interested in getting a taste of Downtown Brooklyn via the residence, there are still plenty of opportunities — the tower is currently at about 30 percent occupancy.