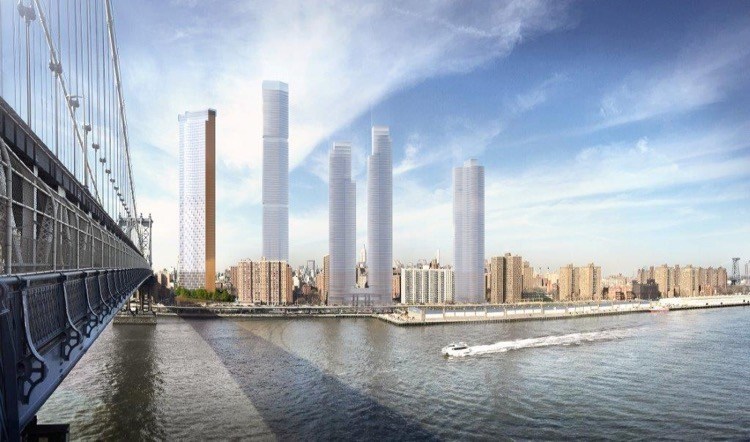 Opponents of a slew of new skyscrapers in the Two Bridges neighborhood have filed a lawsuit claiming at least one developer shouldnʼt be building there.

In the suit, Manhattan Borough President Gale Brewer and the City Council claim a deed restriction prohibits luxury apartments on the site.

And they are comparing the case to the Rivington House scandal which saw one buyer flip the former Lower East Side nursing home for a nearly $1 million profit after paying to have a deed restriction lifted.

“I thought the city had learned its lesson from Rivington, but it appears that would be too much to ask for since it is making the same mistake again with Two Bridges,” said City Council Speaker Corey Johnson.

“This project has been rushed from the start, didn’t go through the public review process that normally applies to projects of this size, and potentially seeks to take housing property rights from elderly low-income New Yorkers and those living with disabilities and give it to developers building luxury housing.”

Two Bridges is set to see three new projects come online, not counting One Manhattan Square to be completed this year.

JDS Development Group is working on the more than 1,000 ft. tall 247 Cherry Street, L+M Development Partners and CIM Group are working on a two-tower building for nearly 1,400 units at 260 South Street, and Starrett Development is building 259 Clinton Street that offers 765 units throughout 62 stories.

In an attempt to stop the projects from moving forward, the City Council and Borough President filed a lawsuit last December after the City Planning Commission approved the projects without the use of ULURP, the city’s process for public review.

The lawsuit was updated on January 24 to include a deed restriction that was put into place in 1986 and recently discovered by the plaintiffs.

According to the lawsuit, 247 Cherry Street is affected by a “restrictive deed, requiring that the land be used ‘in perpetuity for housing the elderly and handicapped persons of low income.’”

The updated suit claims the project shouldn’t go forward, that the DCP never disclosed the existing deed restriction and urges the city to make all three developments undergo ULURP. “The suit filed today lays out precisely why the Two Bridges community deserves and needs a public review process for this development,” said Margaret Chin, the area’s councilmember. “Simply put, a ULURP process must take place. The costs to the residents of Two Bridges are too high.”

Brewer added, “This is simply an outrage. First the Administration says that massive new development does not need a ULURP, then it slips out that there’s an affordable housing deed restriction for a portion of this development that they never mentioned.”

The city’s Law Department said the new lawsuit update is under review.

L+M and CIM Group declined to comment while JDS and Starrett could not be reached.